Lulu gets a new job, Nikolas remains in denial and Liz confides in Sam.

Jax offers Michael a job at the house. Carly says Michael already turned her down and besides, she doesn’t trust Jax anymore. They argue until Michael stops them. He turns down Jax's offer and says if he really wants to help out, he will agree to joint custody of Josslyn. Jax asks if he really wants his sister to grow up with the danger he did. Michael retorts that the worst thing to happen to him was the custody issues between his parents. 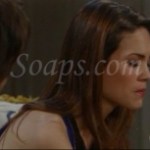 After Lucky and Elizabeth worry at the house that Nikolas won't give up Aiden, Lucky goes to talk to his brother. Sam arrives and finds Elizabeth all riled up. She tells Sam how she lied about Aiden's paternity. Elizabeth confides in Sam that she doesn’t know what to do. Sam encourages her to not put pressure on herself right now because Lucky and Nikolas will do what they're going to do. Sam is reassuring and nonjudgmental, which Liz appreciates. 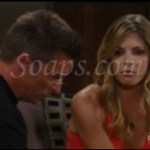 Jason explains Michael's history to Abby at the penthouse. He tells her how he lied about being Michael's father so AJ wouldn’t raise him. Abby asks if he regrets what happened with his brother. Jason regrets how it ended. Later, Carly stops by to ask Jason to talk Michael out of working for Edward. Jason can't because it's Michael's decision. Carly is confused because she thought he hated Edward. Jason thinks maybe he was wrong. He reminds Carly that Edward is alone, so maybe he's learned from his past mistakes. Carly is worried that Michael will be forced to compare himself to AJ and Jason and start to hate himself. Jason knows that Michael is his own person and will make his own choices. Jason promises Michael will be fine, but she worries that Michael will hate her. Jason knows that will never happen. Carly leaves and Sam walks in to tell Jason about Liz's confession that Aiden is Lucky's son. They start talking about their relationship and Sam asks Jason what he truly thought about learning she was getting a pregnancy test. Jason tells her he thought it would be cool. That's exactly what Sam wanted to hear. 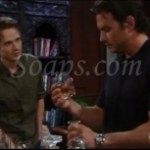 Lucky heads to Wyndemere. The brothers engage in some tense small talk and then Lucky brings up Aiden. Nikolas doesn’t think there is anything to say. Lucky tries to appeal to him, by declaring Aiden is his son. Nikolas counters that Elizabeth is lying to him just like she did about Jake. Nikolas is sorry for what Elizabeth is going through, but her pain won't cost him his son. After some argument over the paternity tests, Nikolas dismisses Lucky, who believes his brother will do the right thing. 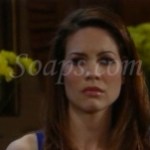 Lucky returns to Elizabeth's house to tell her Nikolas still thinks she's lying. Elizabeth is sorry she's tearing the brothers apart and wishes Emily was there to help make Nikolas understand. Lucky can see in Nikolas' eyes that he knows the truth. Now, he just has to face it.

In his office at the bordello, Lulu tells Javier she won't sleep with him. He laughs and says he wants her to be a cocktail waitress. Lulu isn't interested and asks again where Luke is. Javier says Luke comes and goes as he pleases, but they are working on a lucrative deal so he will be back. Lulu will wait elsewhere, but Javier threatens if she doesn't stay there and work for him, then he will warn Luke she is looking for him. She agrees to serve drinks, but vows she won't sleep with the customers. He orders she will be nice to his customers and do what he says when he says it. Take it or leave it. 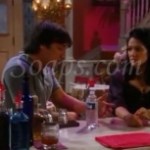 Downstairs, Dante pays Lupe to talk to him. She tells him talking too much is dangerous and it could cost her her life. Dante talks about his troubles with his girlfriend and how she's looking for something that isn't there. He's worried if she does find it, it might break her heart. Javier walks downstairs and Lupe leaves Dante to do a job for him. After Lupe returns from helping Lulu get dressed for her new job, she tells Dante about a regular who was drinking last time like he had abandoned all hope. Dante asks if he has a name. She doesn’t reveal such things. Dante continues to question her about his girl troubles. Lupe tells him he can't fix his girlfriend so he should just go home. Dante leaves as Lulu walks downstairs to see him exit.

Elizabeth and Lucky search for Nikolas.

Michael and Abby go to work.

Carly is furious with Jax over Morgan.