Michael and Edward negotiate, Lulu wants info out of Javier, and Jax puts Brenda in the middle of his fight.

After kissing Ethan, Kristina tells him it was better than she imagined. Alexis and Molly walk in the house. Kristina explains she has abided by the rules by being home at curfew. Once alone, Alexis tells her daughter she is putting Ethan in a risky situation and if she doesn’t stop, she will side with Sonny and forbid her to see him again.

At the mansion, Edward is thrilled Michael is open to his job offer and asks when he can start. Michael says as soon as Jason says he's okay with it. Jason agrees with Abby that it has to be his call. Michael thinks that's a copout and asks for the pros and cons. Jason gives them to him and warns that whatever he decides he needs to keep his guard up around Edward. Jason wants Michael to let him know what he decides and leaves. Edward asks Michael if the gains of working for him outweigh the risks. Edward knows he's driven much of his family away, including Jason – their brightest and best. He looks around and says all this was supposed to be Jason's, but now it falls to Michael. Edward assigns Abby to the position of assistant and Michael a spot in acquisitions. Michael is bored by that and says he's interested in green technology. Edward will get started on that and looks forward to his input. Michael doesn't want special treatment, but Edward can't promise that because he is family. Edward tells Michael everyone else is gone, so it all comes down to him. Michael reminds him it's just a summer job, but Edward counters, "What starts small can become much, much bigger."

As Jax asks Brenda to be a witness in his custody case, Carly walks in his place to pick up Josslyn. Carly accuses him of setting this up so she would go off upon seeing Brenda there with her daughter. Carly assures him it won't work because she won't screw up and lose her daughter. Jax insists to Brenda that isn't true as Carly leaves with Josslyn. Brenda can't believe he was ever with Carly. Jax doesn’t want to destroy her in court, he just wants to establish the truth. Brenda says Carly never deserved him. He needs her help to say that Sonny's world is dangerous for children. Brenda just leaves. 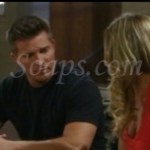 Carly heads to Jason's to tell him what just went down with Jax and Brenda. Jason then breaks it to her that Michael will be working at ELQ this summer. Carly responds, "Like hell." She worries Edward will try to turn Michael against her. After Carly has left, Abby stops by to share her concerns over Michael getting sucked into Edward's world. She worries where that will leave her. Jason assumes richer, but Abby thinks she will be deemed unsuitable and expendable. Jason knows Michael won't think that. Abby wonders if she should talk Michael out of working at ELQ, or even if it's her place to. Jason suggests she be honest with Michael regarding how she feels. He knows Michael would be safe working for Edward, but wonders if it's worth losing him to that end. 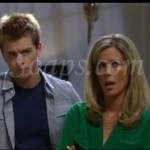 Michael meets with his mother at home. They argue about this summer job at ELQ. Carly won't let Edward groom him to be the next Quartermaine heir. Jax enters to clear things up with Carly. He learns Michael is working for Edward and suggests Michael come work for him instead.

Brenda returns home to Sonny, who just finished talking with Dante about Luke. Brenda assures her husband he is nothing like Luke. He then asks how her visit with Jax went. He brings up Jax and Carly's issues over Josslyn and Brenda angrily wonders if he wants to get involved in their problems. They fight and then decide to just focus on their own family.

Lupe backs up Lulu's story with Javier in the brothel. He tells Lulu to meet him in one of the rooms later to discuss it. Once he's gone, Lulu asks why Lupe covered for her. She did it for Luke's sake because he doesn't need Javier coming after him. Lupe suggests Lulu leave because what Javier wants her upstairs for is nothing she wants to experience. Later, Dante walks into the bordello pretending to look for some companionship. He meets Lupe and asks if there has been any unusual strangers around. She gets defensive saying time is money. He will pay whatever she wants. She invites him upstairs. 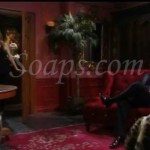 Lulu heads to Javier's office. He will tell her where she can find Luke if she proves herself useful to him. He points to the bed and says, "Welcome to your audition."

Lucky tries to get through to Nikolas.

Jason makes an admission to Sam.