Edward finally gets his way, Lulu looks for Luke and Kristina kisses Ethan.

Lulu shows up at the bordello in Florida and is greeted by Luke's prostitute. Lulu says she's looking for Luke Spencer. Lupe pretends not to know him and tells her she needs to leave before Javier, the bordello owner, gets wind of her asking too many questions. Lulu says she needs to find him because her boyfriend is in trouble and only Luke might know where he is. She tells Lulu a man fitting Luke's description was there but left. Lulu asks where, but Lupe says only Javier might know and she doesn't need to meet him under any circumstances. Lulu presses Lupe for information on Luke as Javier approaches them. Lulu asks if he knows where Luke is. Javier wonders what business she could possibly have with a man like Luke Spencer. 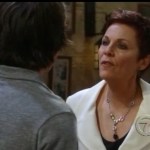 Tracy meets Dante at Kelly's. She tells him she hasn't heard from Lulu. He wants to find her wonders if Tracy knows where Luke is. Tracy can't help him. Dante wonders if she can't or won't. Tracy says Lulu needs to let her father go and Dante needs to stay out of her way.

Jason and Sonny argue about Michael working for Edward at the house. It boils down to Sonny not wanting to risk Michael getting too close to Edward. Jason thinks they need to give Michael some options so he can see that joining the mob is not the best choice. Sonny eventually agrees that losing Michael to Edward would be better than having him get dragged into their business. After Jason leaves, Dante stops by to talk to ask Sonny if he's heard from Luke. Sonny hasn't heard from him, but he thinks Luke might be at the whore house his aunt ran. Dante wonders why Luke would go to the awful place he grew up in. Sonny reminds his son how great he had it growing up in Bensonhurst, but he and Luke grew up with fathers who made them feel like dirt. Luke doesn't feel like he deserves anything great in life so he went somewhere he belongs.

At the Q mansion, Edward implores Abby to help save Michael by bringing him into the family business. Abby won't manipulate Michael because he is a smart man who doesn't need anyone making decisions for him.

Johnny continues to try and convince Michael at the warehouse to work for him. Michael knows he's saying all the right things, but he would be a fool to think he means any of it. Johnny knows there are risks but he thinks this is the best way to make sure Anthony doesn’t kill Sonny. Michael isn't sure if Johnny really wants peace or if he's trying to manipulate him, but either way, he turns him down. Johnny leaves and Abby stop by. She tells him about Edward's offer. She says she feels bad for Edward because he's just a lonely old man who wants what's left of his family around. Michael thinks he's just manipulating him, but Abby thinks a lot of what Edward said made sense.

Michael and Abby return to the mansion to find Edward discussing Michael's future with Jason. Edward wants Michael to learn the business to see if it is something he'd be interested in taking over one day. Michael accepts the job as long as Abby can work there too.

Brenda visits Jax at his office. She knows he's calling her as a witness in his custody case and wonders why. He wants her to tell the court how dangerous Sonny is. Brenda won't trash her husband in court and thinks he needs to leave Sonny out of it. Jax presents his case for how dangerous Sonny is, yet Carly continues to be in his life. Brenda stands her ground and then Jax brings Josslyn out to meet her. 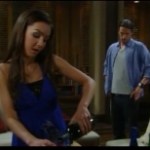 After Kristina convinces Ethan to come to the lake house to help her pick a country to study abroad in, he arrives to find candlelight and wine. He's been to many of the places on her list and she asks if he'd visit her if she went to any of them. He reminds her she's not going until she's a junior and a lot can change by then. She wishes he would take her seriously because she truly cares about him. He calls it a crush. She wants to kiss him to prove she's for real. Ethan tells her to do her worst, so she leans in to do so.

Brenda and Sonny enjoy some romance.