Alexis and Sonny are at odds over Kristina, the Jackal P.I. sticks around and Michael starts his first day of work.

Maxie urgently races over to the penthouse and tells Sam Spinelli is not like himself. She fills Sam in on his behavior and how she thinks something deeply psychological is going on with him. Something to do with wish fulfillment. She worries she won't be able to get through to him.

Jason enters Spinelli's hospital room and is more than confused by Jackal P.I. Jason grows impatient by Spinelli's shtick and tells him he needs him to track down some missing money. Jackal P.I. has no idea how to do that. Jason gives Spinelli his laptop, but he doesn’t know how to use it. Maxie and Sam enter and Jason drags Sam outside. He tells her he needs Spinelli back now! After Jason leaves, Sam and Maxie continue to try and jog Spinelli's memory, but to no avail.

Ethan visits Edward at the mansion and tells him Maya is staying in Philadelphia. Edward reminds him of their deal, but Ethan declares there's nothing he can do to change Maya's mind. Edward offers to give him his plane to go to her. Ethan says he'd also need $350,000 to finance his trip. As he continues to assure Edward their relationship is going really well, Edward just laughs. He informs Ethan that Maya called him and updated him on their divorce. Edward enjoyed watching him work though. Ethan tries to get a small payoff, but Edward shuts the door in his face.

Edward stops by Jason's place to discuss Michael. He want to offer the boy a summer internship at ELQ. Jason tells him Michael already has plans, but he should talk to Michael about it. Edward knows Jason has a great deal of influence over him. Edward thinks this is Jason's chance to make things right for giving Michael to Sonny so many years ago.

At Kelly's Alexis tells Kristina, as punishment for going off to the Dominican Republic, she will not be going on her class trip to Cancun. Kristina is livid, but Alexis tells Kristina that she will play by her rules since she pays her bills. Alexis adds to her punishment that she will not be going on their family New York trip and she will be home by 6:00 every night. Alexis suggests if Kristina really cares about Ethan, she will find a more appropriate boyfriend. Once Alexis has left, Ethan joins Kristina, who tells him about her punishment for going off with him. Kristina invites Ethan over to the house to keep her company. 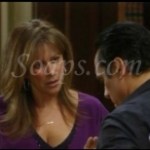 At Casa Corinthos, Michael rejects Sonny's offer to work in an office and travel to coffee plantations. Michael doesn't want Sonny to pave the way for him. He wants to start in an entry level position at the warehouse. Brenda shows up as father and son reach some common ground. Sonny brings up Anthony's threat on Brenda. Sonny warns Michael son Anthony is upping his game so he doesn’t want him anywhere near the Zaccharas. They make arrangements for Michael to start work and then he leaves. Brenda wants Sonny to hang out with her and Alec for the day, but he can't. She assumes he has to work, but he assures her it's scarier than work – it's Alexis. He has to talk with her about Kristina and Ethan. Brenda tries to remind him she was just like Kristina when she fell in love with him at 18. She urges him to realize he can't change his daughter's mind about who she's falling for. She also reminds him that Ethan isn't as bad as he was back then. Alexis stops by and Brenda leaves. The parents biker over Kristina's punishment. Sonny thinks she's too lenient and Alexis calls him a Neanderthal. After more frustrating conversation, Alexis throws up her hands and leaves. Jason stops by and tells Sonny about Edward's offer to Michael. Sonny doesn’t like it, but Jason knows at least Michael would be safe. 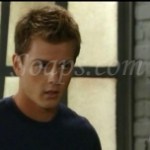 Abby visits Michael at the warehouse. She thinks she should get a job too and considers talking Anthony up on his offer. She thinks she can help spy on him for Sonny and Jason. Michael says no way and wants her to stay far away from them. Abby thinks that good advice that he should take for himself. Johnny stops by wondering why Michael isn't working for him. Michael responds that Anthony is itching for a war and there is no way he will side against his father. Johnny thinks they should work together. 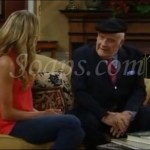 Edward invites Abby over to the house. He offers her a position at ELQ, with one catch: Michael works there too.

Michael makes a decision regarding Johnny.

Aiden Is My Son!