Elizabeth comes clean with Lucky, Lisa's reign of terror comes to an end and Maxie is puzzled by Spinelli.

Elizabeth finds Lucky about to take a drink on the Haunted Star. She doesn’t want him to do this because his kids need him – including Aiden, who is his son. Lucky thinks she's just saying that to keep him from drinking. She assures him it's the truth. He angrily wonders why she is telling him this now. She tells him she got the results the night Jake died. She wanted Lucky to be Aiden's dad so badly, but she never thought she'd have to pay for it with Jake's life. She wanted to tell him, but he was going through so much. She also didn't want to come between him and Nikolas again and then there was his wedding to Siobhan. He points out he is the reason his wife is fighting for her life right now and says he is no better than his dad. Elizabeth assures Lucky he is stronger than Luke. She believes in him. She always has and she always will. Lucky responds that she always knows how to talk him down from the edge. He pushes the drink away and tells Liz her faith in him saved him. He will try to not let her down. He asks if Aiden is really his. She says yes. He offers to go with her when she tells Nikolas, but she thinks Nikolas should hear it from her. She starts to walk away. Lucky stops her to thank her.

Lucky returns to a still unconscious Siobhan's hospital room. He says he doesn’t even know where to start making amends. She wakes up and after she is checked out by a doctor, Lucky tells her he set the fire. She says it just means he owes her now and she will think of ways for him to repay her. He will start by trying to be the husband she deserves. 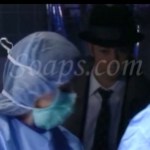 As Steve and Matt operate on Spinelli, his gumshoe persona observes. He tells his unconscious self he has to make it through the surgery because the dame with the baby blues will pledge her undying devotion.

Patrick tries to talk Lisa down from sticking Robin with the syringe in the hospital conference room. As he does, he grabs Lisa. They struggle and she is stuck with the syringe containing drain cleaner. She collapses in Patrick's arms. 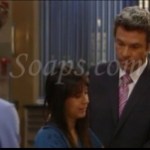 Robin and Patrick meet with Mac in the hallway. Patrick says he doesn't know if Lisa made it, but it doesn’t look good because drain cleaner is so toxic. Patrick can't believe how everything spiraled out of control. Mac expresses some disdain towards him, but Robin assures her uncle they have worked everything out. Patrick leaves to get checked out, as Robin fiercely defends her husband to Mac. He smiles and hugs her. He loves when she scolds him, but more importantly, he loves that she's alive. A hospital employee hands Robin some test results. Robin says she has to leave, but tells her uncle they are not done talking about Patrick. Matt emerges from Spinelli's surgery and tells Maxie Spinelli will be okay. She embraces him.

Jason finds Sam in the hospital hallway and is relieved to see that she's safe. He tells her Spinelli is in surgery. They talk about what a good friend he's been to them. Sam points out how good Jason has been to Spinelli as well. Jason calls him a true friend and he doesn't know what he would do without him. Robin finds them and tells Sam she isn't pregnant. Robin leaves as Jason takes Sam in his arms.

Robin returns to Mac at the hub. As they discuss Patrick and Lisa, Steve comes out to tell them Lisa is in a coma and there's no telling if she will come out of it. Mac is happy to hear it because she got what she deserved. 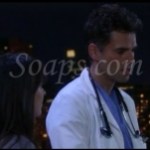 Robin finds Patrick on the roof. He worries that Lisa could have stabbed either one of them. He thinks when they were fighting with the syringe it was like she just let go and let him win. Robin doesn't want him to blame himself, but he admits he didn’t try to stop the syringe from going into Lisa. Robin thinks she wanted to die so nothing could stop it. However, she didn't die, so she's a prisoner in her own body. She tells Patrick they are finally free.

No Good To Anyone.

Aiden Is My Son!