No Good To Anyone.

Lisa continues her rein of terror, Dante and Jason make a move and Lucky heads to the Haunted Star.

Once they're done bickering with Ronnie outside, Jason and Dante find a way in to the hospital. They meet with Lucky who is outside the conference room, where Lisa is holding the hostages. They try to figure out how to disarm the lock down by guessing a code Steve picked. Jason suggests it could have something to do with Jake, so Lucky types in the boy's birthday. It works. Dante, Jason and Lucky brainstorm on how to ambush Lisa. Elizabeth leaves the O.R. to bring Lucky to see Siobhan.

Lucky learns from Liz and Matt in the hallway that it's too soon to say what the long term effects on Siobhan will be, since there was bleeding on her brain. He's not sure if she will even wake up. Lucky sits with his unconscious wife and talks about how beautiful Ireland is. He's not sure why she stayed with him. He should have let her go. He gets upset and leaves the room.

Outside the hospital, Mac and Ronnie argue about Jason helping the with the rescue. Mac says if Jason takes Lisa out for good, he will pin a medal on him. Lucky walks out, but Mac wonders why he's leaving. Lucky says he's no good to anyone right now. Ronnie implores Mac to act on the situation and stop thinking like a parent because Robin and Maxie are up there. He says they need to get the S.W.A.T team involved. Elizabeth walks out and asks about Lucky. Mac says they need him there or else they might have to take his badge. 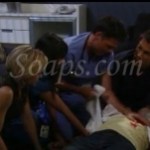 After Lisa orders the doctors away from Spinelli, who she just shot, she continues her torment of Robin and Patrick in the conference room. She needles them by asking Patrick questions offensive to Robin. Patrick won't answer, so Lisa turns her attention on Steve to ask about her medical abilities. She also brings up their one night stand and accuses him of keeping her on staff so she wouldn't slap a sexual harassment suit against him. Steve take responsibility for what happened between them. She just wants someone to admit Robin and Patrick were at fault in their situation. Steve tells her she is a gifted doctor, but now her career is over. And for what? Maxie is next on Lisa's list for interrogation. She wonders when she first wanted to destroy her life. Maxie always knew Lisa had an agenda, but she admits she used to be a lot like her by going after a married man. However, Maxie never became a stalker. When Lisa focuses on Robin, Spinelli starts to have trouble breathing and Steve notes his lungs are filling with blood. Dante calls the conference room and instructs Maxie to find out what Lisa's demands are. Lisa makes threats so Maxie tells Dante not to call again. Patrick implores Lisa to put down the gun. He will walk out with her, but he needs to trust her first. Tears roll down her face as he asks her to put down the gun. She snaps out of it and accuses him of sweet talking her like he used to in college. As Lisa continues to rail at everyone in the room for taking everything away from her, Dante and Jason burst in. Lisa shoots Patrick in the arm and grabs Robin in the confusion. Lisa then tries to run, but Dante tackles her. Lisa lies unconscious, as Steve, Jason and Maxie tend to Spinelli, who is now in shock. Spinelli is wheeled to surgery, as Robin calls for a doctor to stitch Patrick up. Lisa wakes up, grabs Robin and holds a syringe to her neck.

Spinelli is taken to the O.R. Maxie cries as she tells Matt what happened. She begs him to save Spin's life.

Lucky heads to the Haunted Star and pours himself a drink. 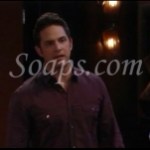 Johnny angrily confronts Anthony at home about Lisa. He knows he aided her take over of the hospital. He says it's like Claudia all over again. Anthony tells his son he worries too much about the wrong people. Anthony says he was liberating him from Lisa by helping her. Johnny admits he liked her. Anthony did to, which is why he didn't kill her and dump her in the harbor. He gave her a chance for revenge. They continue to argue with veiled threats being exchanged.

Spinelli wakes up from surgery.