Kristina and Michael prepare to graduate, as Lucky tells his siblings about Luke.

At home, Kristina tells Molly about her trip with Ethan and how he got divorced. Molly is excited that no one can object to them dating now. Alexis walks in and says she can. Molly thinks Kristina and Ethan's relationship is romantic, but Alexis calls it irresponsible. However, they will sideline it for now so they can celebrate Kristina's graduation from high school today.

Jax stops by Carly's house to tell her, per Alexis' invitation, he is going to Kristina and Michael's graduation. He hopes they can put aside their differences for the day. Morgan walks downstairs and is cold towards his step father. Jax is sorry he let him down, but he tried to be a good father to him. Morgan only sees that Jax left and that he's trying to take Josslyn away from them. Jax says if he had adopted him, he would be fighting for custody of him as well in order to keep him safe. Morgan isn't swayed by Jax's sentiment. 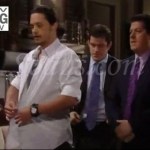 Sonny has Max and Milo physically bring Ethan to him at home. Sonny tells Ethan he can take a pay off and leave town or he can go to the Pine Barrens with Max and Milo. Either way, Sonny does not want to see Ethan with Kristina. Ethan declines the payoff, so Sonny orders his men to take Ethan away. Ethan insists he and Kristina are just friends and that Sonny should trust his daughter's judgment. Milo leads Ethan out, but Sonny tells Max to let him go. Later, Brenda tells Sonny she's not going to Michael and Kristina's graduation. She fears Carly will start something with her and she doesn’t want to do that to his kids. He reminds her she is his wife and his kids are expecting her to be there. She holds her ground and sends him on his way. Jax stops by to tell Sonny he will be at the graduation, but Brenda informs Jax her husband's not home. She then says she's not going to the ceremony. Jax invites her to go with him.

Abby and Michael meet on the pier and discuss his graduation day. He notes how much it means to his family, but Abby thinks he needs to do this for himself as well. She tells him going to the ceremony will be important to him a few years from now even if it doesn't seem like it now. Abby says she'll stop by afterwards, but Michael wants her at his graduation.

While out for a run, Lulu finds Lucky at Laura's old house. He tells her Luke isn't coming back. Lucky says Luke has spent his whole life running from his father, but now he's turned into the man he hates the most.

Dante comes upon Lulu on the pier. She tells him Luke isn't coming back, but Dante isn't surprised. Lulu truly thought he would return, but it's like Luke has resigned from being their father. She beats herself up for going along with the intervention, but Dante knows she was just trying to help her dad. He invites her to Michael's graduation to take her mind off things, but she declines. Dante knows her dad loves her, but she retorts, "Not as much as he wants to stay gone."

Lucky finds Ethan on the Haunted Star and tells him about Luke. Ethan in turn tells his brother about his divorce and how Kristina accompanied him to the Dominican Republic. Lucky tells him to be careful so they don't lose him on top of Luke, noting from now on, they are on their own. Lulu enters as Ethan says he's not convinced Luke is gone for good Lucky tells his siblings Luke feels liberated by Jake's death. He wants nothing to do with them. They need to accept it so they can get on with their lives.

Lulu and Ethan find Lucky back at the house. He finally understands why Luke always wanted to see the place torched.

Kristina and Michael meet up at graduation. He brings up his college acceptance and gets her to admit she applied to PCU for him. She isn't sorry she did it and encourages him to actually attend college. Abby, Carly and Morgan arrive, as does Sonny, who thanks his exes for being great mothers. Dante is next to stop by and Sonny thanks him as well for his influence on Michael. As the ceremony gets underway, the mayor announces that Melinda Bauer has set up a scholarship in memory of her dead son Kiefer. A classmate walks over to make digs at a rattled Kristina over Kiefer's death. Michael stands up to the boy, who says if Kiefer did hit Kristina she deserved it. Jax shows up in time to see Michael punch the kid in front of the whole audience.

Michael is nowhere to be found.