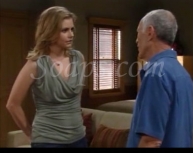 Lisa summons Anthony to the apartment. She tells him she knows he wants to use her as a distraction so he can do his own shady bidding. Anthony declares she is correct and says they have a mutually beneficial partnership. Lisa tells Anthony her plan off screen, which delights him. He is in awe of the purity of her hatred and would be honored to be part of it.

Patrick saddles up to the bar at Jake's and discusses Lisa with Coleman. He tells him how different Lisa was in college. Coleman thinks he had the best of both worlds back then and asks if he misses it. Lisa enters the bar in disguise and listen as a now present Robin gives Coleman advice on keeping Kate. The Drakes then declare their love to each other, as one of Anthony's men meets with Lisa.

Anthony sees Brenda on the pier. He introduces himself and rattles on about Sonny and Claudia. Brenda becomes uncomfortable and tries to leave. Anthony forcefully tells her not having her guards around is a serious lapse in judgment. He hopes she doesn’t end up like Claudia.

Lucky apologizes to Luke at the brothel for the way he handled things. Luke accepts and then tells him to leave. Lucky can't go until Luke understands that he didn’t know how to process Jake's death. So, he latched on to Luke's drinking. What he forgot was that an addict can't begin recovery until he can admit he is powerless to his addiction. He knows that he made Luke feel that his love for him was conditional, but he loves him regardless of what he's done. He needs Luke in his life. Lulu, Ethan and Tracy do too. Lucky asks him to come home. Luke doesn’t want to return for more sanctimonious lectures. He doesn't think any of them know who he is. He is done being railroaded into roles he has no interest in playing. Luke will not go home. He doesn't have one and he likes it that way. Luke never wanted to be a father or have responsibilities other than to himself. But he fell in love with Laura, which put him in a pit with people who wanted to make him respectable. He calls Lucky the worst offender of the lot. He will live the rest of his life fast and furiously and he won't have any of them slowing him down. He regrets killing Jake. He is sorry for all the pain he caused, but he learned that every cloud has a silver lining. When he killed Jake, it moved him up and beyond redemption. It liberated him in a way he has never been before. Lucky is shocked by his father's words, but Luke says a man who kills a child can never be forgiven and never say he's sorry enough to put a dent in the devastation he's caused. He calls himself irredeemable. He's retired from fatherhood and asks Lucky to leave. A stunned Lucky obliges, as Luke breaks down in tears. He then puts one bullet in his gun, as Lupe enters. He tells her how nasty his father was and how he was afraid he would end up just like him. But Lucky came anyway and loving him was the easiest thing he had ever done. He says Lucky has always been better than him. Lupe takes the gun away and asks Luke to tell her about Lucky, which Luke happily does. He then tells her how he screwed up with his son, but he set him free. He made Lucky hate him as much as he will always love him.

On the plane home, Lucky tries to explain Luke to Siobhan and how he felt trapped by the house Laura fell in love with. Lucky says Luke always wished he never laid eyes on the house. Lucky is starting to feel the same way.

After Sonny and Alexis barge into the judge's chambers in the Dominican Republic, Ethan tries to explain the circumstances surrounding their trip. Bickering ensues until the judge reminds them it isn't family therapy. He wonders if Ethan still wants the divorce. Ethan says yes, but Alexis yells no. Ethan reminds her it's none of her business, but Alexis hopes he and Maya can work it out. Once Ethan signs his papers, Sonny tells Kristina they're leaving. Kristina fires back that she came with Ethan, so she's leaving with him.

The foursome take Sonny's jet home. Alexis and Sonny accuse Ethan of using Kristina. Kristina rails at her father, calling him out on his hypocrisy. Sonny declares he is only looking out for her because he knows Ethan is taking advantage of her. Ethan insists nothing could be further from the truth and vows to see Kristina whenever he pleases. Alexis just sighs in exasperation.

Lucky and Lulu are left devastated.