Lucky finds Luke, Alexis and Sonny track down Ethan and Kristina, and Maxie reaches out.

Sonny and Alexis fly on Sonny's jet to the Dominican Republic. Sonny declares he will do whatever it takes to protect their daughter from Ethan. Alexis orders him not to harm him, but Sonny says Ethan will have to answer for bringing his young daughter to the DR.

A chipper Kristina brings a hung over Ethan a Bloody Mary in the hotel room. She has
one for herself, but despite her being of legal drinking age in the Dominican Republic, Ethan won't let her touch it. He wants to lay low for a bit, but she's raring to get him divorced.

Sonny and Alexis burst into the judge's chambers assuming Ethan and Kristina are getting married. They demand the proceedings be stopped. Ethan wonders why they would want him not to get divorced. 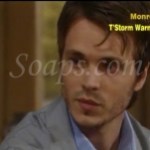 Lucky and Siobhan get a hotel room in the city where Luke grew up. Lucky thinks the brothel is the closest thing Luke had to a home. He shares his history with Luke and how he became disillusioned with him. However, he never doubted that Luke loved him. Lucky knows his father is a good man, but he's not sure how to get him to believe it. Siobhan knows he needs to confront his face on his own, but assures him he has her support.

Luke pays a hooker for her services in the brothel, calling himself the patron saint of sinners. He pulls the cash out of a bag full of money. Lucky comes to Luke's room, but the hooker answers the door. Luke introduces Lupe, an old friend, to Lucky. Luke then tells Lucky to just walk away, but Lucky says he's there to admit he was wrong. 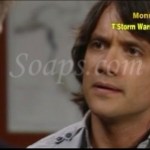 Dante finds Jason in the restaurant office to discuss the Zacchara warehouse fires. Jason tells him to talk to Diane. Dante wonders how he's supposed to set a good example for Michael when he won't even consider leaving the business. Jason wonders if he's supposed to quit before or after Anthony burns down the town. Dante urges him to stop the war with Zaccharas in hopes that Michael doesn’t get hurt.

Lulu enters Crimson, as Maxie tries to put out some fires set by the new assistant. Maxie wants Lulu to come back to work so she can have a life again, but Lulu says she can't. Maxie tells her Luke is never coming home so fixing up the Star is pointless. Lulu counters Lucky is out looking for Luke right now. Maxie thinks it's better if Luke stays gone considering all the people he's hurt with Jake's death. Especially Jason, who just might kill Luke if he returns. After Lulu leaves, Dante enters. They discuss Lulu's need to fix Luke's problems. Maxie thinks he should intervene because she is circling the drain, but Dante wonders what he's supposed to do. She tells him to get creative and gives him a trip she originally booked through Crimson for her and Matt. 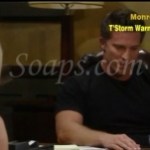 Lulu stops by the office to see Jason. She tells him Lucky went to find Luke and asks him to stay away when he returns. They debate Luke's culpability in Jake's death. She tells him killing her dad will not make things better. She doesn’t expect him to forgive Luke, but she hopes he won't go after him. Jason won't hurt Luke, because he wants him to suffer by reliving what he did every day. Just like he does. Once Lulu has left, Maxie enters to tell Jason she inadvertently caused Lulu's visit. She feels bad because Jason doesn't deserve it after all he's been through. She sincerely offers her support and an ear if he ever needs someone to talk to. Jason thanks her.

Dante meets Lulu on the Haunted Star. He shows her the tickets Maxie gave him for France. She thinks it's amazing, but she can't go. She really wants to, but she has to spend some time with her dad first. 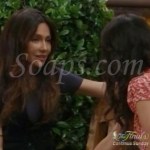 Brenda freaks out on the pier while with Robin after hearing a car backfire. She thought people were shooting at them. Robin understands why she's so jumpy, but thinks she just needs to give it time and she'll figure out her life as a mob wife. Brenda thinks she has to start thinking about her son though. She wonders if she a bad mom because she's with Sonny.

Ethan and Sonny go at it.

Lucky is left heartbroken by Luke.