Molly freaks Alexis out, Lisa gets an assist and Liz loses it.

Michael orders Anthony out of Abby's place. Before he leaves, Anthony tells Michael about the job he offered her. Michael is incensed, but Abby points out Anthony's ruthlessness is what it takes to make it in the mob. Michael assures her he would never turn out like Anthony. Abby doesn't want to be one more person who is trying to control him and feels bad about the ultimatum she gave him. Even though she doesn't agree with him joining the mob, she won't judge him. She accepts him the way he is. Besides, she missed him so much she could never send him away again. As they make out, Abby discovers his college acceptance letter. He has a pretty good idea who applied on his behalf. 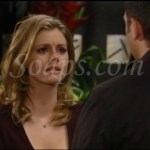 Lisa begs a resistant Johnny at his place to help her start over someplace else. He tells her to turn herself in so she can get the help she needs. She declares she's finally figured it out: There is no person worth dying for. Johnny eventually agrees to help and steps out. Anthony returns home and finds Lisa alone. He surmises that she's planning on slinking out of town to start over. He declares he would never let his enemies force him to do so. He then needles her about Patrick getting off easy in all of this and even celebrating her departure. She says she knows how to handle Patrick. He thinks there's still some fire in her and offers to help her seek revenge.

Anthony brings Lisa to an apartment he uses for privacy from Johnny. He says she can use it as her base of operations. She vows revenge on everyone.

Kristina surprises a hung over Ethan on the plane to the Dominican Republic. He's worried about Sonny finding out, but Kristina doesn’t think he will. She assures him she will handle her father if he does. As bad of an idea as it is, Ethan welcomes her aboard.

Once at their destination, Ethan and Kristina discover that all government offices have been closed due to a holiday. They are forced to spend the night, but only have one room, with one bed.

Sonny calls Alexis and Carly to his office to discuss a graduation celebration for Michael and Kristina. They hammer out some details and Alexis leaves. Sonny credits Carly with keeping Michael in school, but Carly thinks it's all on their son. They both note how proud they are of the man he has become.

Michael meets with Carly at Kelly's and accuses her of applying to college for him. She denies it, but he is convinced and angrily says he will make the decisions for his life.

Alexis finds Molly doing research on the Dominican Republic at Kelly's. Alexis questions her daughter assuming she and Kristina are planning a romantic getaway for her and Mac. Molly slips and admits that's not it. Alexis says, "Alright Little One. What are you up to?" Molly explains to her horrified mother that Kristina has gone off with Ethan, who is divorcing Maya. She says now that Ethan and Maya's marriage is over, there's no reason Kristina can't be with him. So, they are making it official. Alexis starts to panic and says, "I think I'm having a heart attack."

Alexis races into Sonny's office to order him to get his jet ready because Kristina and Ethan are getting married in the Dominican Republic.

Olivia helps Steve pack up Jake's things at Elizabeth's house. She suggests he keep one of the toys he gave Jake since it has sentimental meaning for him. He thinks it's a good idea and says he couldn’t have done this without her. Elizabeth returns home and becomes furious that Steve is packing up her son's things behind her back. Steve tries to remind her that they talked about him doing this, but she wants both of them gone. Steve and Olivia comply, leaving Elizabeth in tears. Olivia returns to explain to Liz that Steve only packed up Jake's things because she asked her brother to do so. Liz starts to remember and can't believe she forgot that conversation. Olivia assures her everyone understands the grief she's feeling. Liz apologizes for her behavior and says she feels like she's losing her mind.

Robin sees Steve at the hospital. He tells her what just happened with Elizabeth. Patrick joins them, as Johnny approaches saying Lisa contacted him for money. He says she called from Canada.

Alexis and Sonny rush into the judge's chambers.