Nikolas approaches as Elizabeth sadly watches Patrick and Robin playing with Emma near the hospital elevators. Nikolas sits with her noting how upset seeing them made her. She hopes no one else noticed, because she doesn't begrudge them their happiness. She just recalls Jake spinning around like Emma was. Nikolas promises her time will help her heal. She thinks grief over a child is different and worries she will feel this way forever. Later, Robin asks Liz over for a barbecue and then asks her to work on organizing Patrick's patient files. Liz is offended that she is being handed busy work. She accuses Robin of thinking she can't handle being a competent floor nurse. Robin assures her that's not the case and that they are working on a project they thought she would like to be part of. Elizabeth apologizes for jumping to the wrong conclusion.

Robin runs into Nikolas outside Kelly's. He asks if Liz's grief is affecting her work. Robin defends her, but Nikolas worries she hasn't taken enough time off. Robin says she will keep an eye on her. Nikolas walks away, as Lisa lurks. 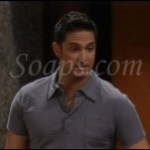 Patrick shows up at Johnny's looking for Lisa. Johnny says he didn't know Lisa escaped and will call the cops if she contacts him. Patrick isn't convinced, recalling Johnny has always defended her in the past. After Patrick has left, Lisa shows up. Johnny thinks she needs professional help, but she won't get locked up. She puts his gun to her chest and tells him to pull the trigger because she'd rather be dead than get caught. 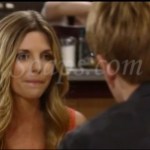 Abby and Sam meet up at Kelly's. Abby tells her friend she and Michael are on the outs. They move on to discussing Abby's unemployment woes, as Michael walks in. Sam gives Michael her seat and leaves. Michael and Abby say they miss each other and she tells him she has officially been cleared of Brandon's murder. He is relieved and then asks if she applied to college for him because he's been accept to PCU. She didn't.

Kristina stops by Sam's office to ask for her help with Ethan. Sam tells her it's a bad idea to get involved with a married man and until the ink is dry on his divorce papers, she can't believe a word he says. Kristina tells Sam she can't change her mind about Ethan, because what she feels for him is real. Sam warns that she can love someone, but it doesn’t mean they will love her back.

Jason finds Spinelli in the restaurant office. Jason sees that Spinelli has been watching Sonny's rivals on a live stream feed he set up. He tells Jason he's been framed for torching a Zacchara warehouse, but Jason responds that he wasn't framed. Spinelli wonders why Jason would antagonize Anthony. Jason is hoping Anthony will strike back, which will cause Johnny to realize the cost of the war is too high and will shut his father down. Jason orders Spinelli to increase surveillance, which he is already working on. Spinelli is in awe of Jason being able to take action, noting he froze when Maxie choked at Jake's. He then gets an alert which sends him racing out of the office. Michael enters to ask if Jason had anything to do with his college acceptance. Jason doesn't know anything about it. Jason thinks it's just a good thing that he's in. Michael declares he isn't going to college. Jason tells Michael he needs to know that Johnny is at war with them if he's still considering joining the Zacchara family. They argue and Michael leaves. Sam is next to drop by. She expresses how happy she is to see Jason back at work doing what he does best. She asks if he has made any decision about quitting the mob. Jason responds that he can't because there's too much he has to do. 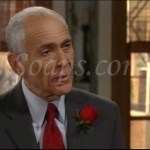 Anthony visits Abby at home and offers her a job working for his lawyer, as Michael comes by.

Matt visits Maxie at Crimson and helps her out with a complaint about an article on safe summer tanning. As Maxie bemoans all slack she's been picking up from the new assistant, she wonders if she should be doing something more meaningful that actually helps people. Matt knows she's loves fashion and offers to help in any way he can. Later, Spinelli runs in telling Maxie he put an alert on her computer and he must fix things before the virus he detected does any damage. She is happy to see him back to his old self, especially after seeing him so sad at Jake's. He is touched she still thinks about him and feels they are still connected.

Elizabeth flies into a rage.