Ethan and Maya say goodbye, Lulu remains optimistic, and Spinelli is on the outside looking in.

In bed with another man at the hotel, Maya tells Ethan she's sorry. The guy gets dressed and leaves, but not before urging Ethan not to take his anger out on Maya. Maya launches into the story of how she met Aaron, a cardiologist she met at the hospital while visiting her aunt. She cries as she says she won't be coming back to Port Charles. However, she loved being married to Ethan because he made everything fun. He was the best time she ever had, but being with him scared her to death. Although hurt, Ethan remains calm and understanding. Maya says their differences are too great because she is not wired for the adventure he seeks every day. She's sorry she didn't tell him, but she couldn’t let him go. She asks how he has been and Ethan lies about what's been going on. He says he's great and he's finally learning what it means to be part of a family. She feels bad he won't be getting Edward's money, but he doesn’t care about it. He just thought she needed it. She wants him to yell at her, but he won't. He says they had a great time, but every party has to end. He states she was the most fun he ever had too. He kisses her on the cheek and leaves, but pauses outside the door as he tears up. 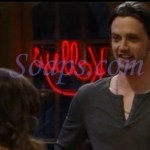 Ethan walks into Kelly's and finds Kristina. He tells her Maya is with someone else and not coming back to Port Charles. He admits he couldn't risk putting himself on the line by telling Maya he was falling for her. He advises Kristina not to pass up real love if she ever finds it because it won't come back. She knows Maya really hurt him, but Ethan thinks Edward will be the one hurt in all this. He says it's over and all that's left to do is move on, so he's flying to the Dominican Republic to get a divorce.

Sam shows up to the office for her date with Jason, but he forgot. He tells her Dante compared him to Luke. Jason agrees he sounds like a hypocrite with Michael, recalling how he was with the Quartermaines so many years ago. He wonders why he's even still in the business. They debate the issue, with Sam arguing against him quitting the mob. Jason is confused, thinking she would want him to quit the business. She tells him he can't deny who he is: a person who likes to take chances. She loves him just the way he is and she doesn't want him to change. Jason gets a call from Bernie. Panicked, Jason asks, "How much did we lose?"

On the Haunted Star, Dante and Lulu's dancing turns into passion as they rip each other's clothes off while kissing. Afterwards, they marvel at how great that was. Lulu says it was amazing to not hurt and second guess everyone, but to just be with him. With a cocky grin, Dante offers his services any time she needs them.

Lucky and Siobhan brainstorm at home about where Luke could be. Siobhan asks where does one go when they've lost everything? Lucky thinks he might know. Lulu and Dante stop by. Lulu apologizes for their interaction earlier. Lucky appreciates it, but agrees that he drove Luke away. He says he'll find him and make it right. He has accepted that Luke needs to deal with his alcoholism in his own way and he promises not to push his agenda on their father. However, Lucky warns his sister it might not make a difference when or if he finds him.

Dante and Lulu return to the Star. Dante warns an excited Lulu that things might not turn out the way she hopes with Luke. Lulu remains optimistic that Luke will be home in a week, so she needs to get the Star ready for him.

On the plane, Lucky tells Siobhan he's glad she's going with him to find Luke. She's sure everything will work out, but Lucky says if Luke wants to destroy himself, he will succeed. Siobhan doesn't want Luke to destroy him too. 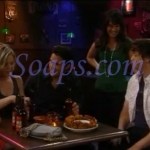 Maxie sees Spinelli at Jake's and they discuss Lulu's situation. They move on to discussing his book and Maxie tells him it was a fun read. Patrick, Robin and Matt interrupt them, much to Spinelli's obvious dismay. The foursome head to the bar, leaving a sad looking Spin alone at the table. As they take their own table, Robin invites Spinelli to join them. Maxie munches on some pretzels and starts to choke. Spinelli tries to help, but she makes her way over to Matt, who saves her. A dejected Spinelli looks on, as Maxie calls Matt her hero.

Anthony wants Abby to work for him.