Lulu drowns her sorrows, Ethan gets an unsettling surprise and Shawn opens up to Carly. 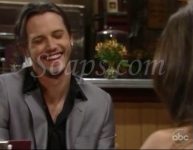 Kristina finds a drunk Ethan, who's upset about Luke leaving, outside Kelly's handing out money. She brings him inside and gets him to eat. They talk about Luke and he gets a text from Maya. He relays to Kristina that Maya doesn’t know what's going on with his father. Kristina notes she's the only one he can talk to because Maya won't leave Philly. He says he may have lost his father, but he hasn't lost his wife. He decides to go Philadelphia to talk to Maya and thanks Kristina for helping him come to that decision. 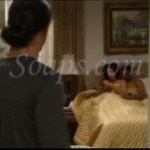 Ethan heads to Maya's hotel room and finds her in bed with another man. 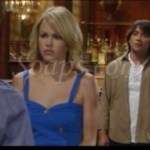 Lucky finds Lulu on the Star trying to convince Dante buying the casino is a good idea. Lucky doesn't think Luke is coming back, but Lulu thinks he will now that she's bought the Star. She fills him in on the details, but Lucky thinks it's a bad idea. Dante tries to get Lucky to back off, but Lucky thinks he's just feeding into her denial. Dante leaves them to it. Lulu asks Lucky to put his feelings aside and do what's best for the family: Find their father and bring him home. Lucky refuses. Lulu blames Lucky for forcing his 12 step beliefs on their father, thereby taking him out of their lives. Lulu pours herself a drink and throws it back while eyeing her brother. Lucky leaves as Lulu pours herself another one.

Lucky heads home where Siobhan finds him packing to find Luke. She wants to come along to help. 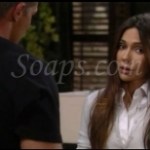 Jason leaves Brenda and Sonny at the house to discuss her idea of Jason taking over the business. Sonny tells his wife the last time he got out of the business, Michael was shot. Brenda doesn’t think that has anything to do with what's happening right now. Sonny thinks it would make him an easy mark if he stepped down, but still stayed in town. Since he can't leave his children, he can't get out. He is in this business for life. Brenda knows he's in a bad position and says she'll deal with it. Sonny will do everything he can to protect her son. She believes him. They head upstairs to bed, where Sonny tells his wife as long as they are together life is perfect.

After Shawn punches Jax at the Metro Court, he apologizes to Carly for losing control. Carly tells her estranged husband what he did was unfair. Jax tells her to get used to it because it will only get worse in family court. Carly thinks he will only hurt their daughter and destroy himself in the process. Carly orders him to start thinking about what's best for his daughter. 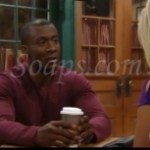 Carly meets Shawn at Kelly's. He admits he killed one of his own men in the marines. Carly asks if he did it on purpose. He says no and explains that he was following orders and hit a fellow comrade in the process. The marines didn't want to take the blame for ordering the hit, so they forced him to take an honorable discharge. He didn’t know what to do once he was out of the service, so he started taking jobs, which led him to Theo and eventually her. She asks what he will do next. He leaves to work on that.

Dante meets Jason in Sonny's office. He wants Jason to convince Lucky to forgive Luke so they can all start the healing process. Jason won't do that. Dante wonders how Jason is any better than Luke when he won't leave the mob to set a better example for Michael. Once Dante has left, Carly shows up. She worries what Jax did with Shawn is just a preview of what he'll do with Jason and Sonny at the hearing. Jason worries he'll be the reason she loses Josslyn. Carly makes a case on his behalf, but Jason tells her what Dante said. She assures him he is nothing like Luke, but Jason wonders if he is so good and generous, why is he still in the business?

Dante returns to the Star to find Lulu with a bottle of booze. She tells him how awful she was with Lucky. She pours them both a drink and toasts to the destruction of her family. She says, "To the Spencers. They were fun while they lasted. May they rest in peace." Dante will drink with her but he won't drink to her family's demise. He will however drink to them and how he will stand by her through anything. She will accept that and they down a shot. He pulls her off her stool so he can hold her close as they dance.

Ethan heads to the Dominican Republic.

Lucky figures out where Luke is.