Jax digs up dirt on Shawn, Lulu formulates a plan, and Brenda worries for Alec. 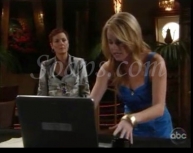 On the Haunted Star, Tracy tells Lulu selling the casino is not about punishing Luke, but about saving themselves. Lulu wants to run the Star as a family, but Tracy doesn't think Luke will come back. Lulu wants to support her dad instead of pushing him away like Tracy. Lulu calls Nikolas over after Tracy has left to ask him to invest in the Star. Nikolas has doubts, but says if he's going to make an investment, he'd rather make it in her than Luke. Nikolas will give her the money, but warns she might be disappointed if she expects it to bring her family back together.

At home, Jax tells Carly Shawn killed one of his own men while at war. He has seen the video footage and despite the media calling it friendly fire, Jax thinks the judge would side with him on the issue. Carly tells Jax to leave. He does so, but leaves the file on Shawn behind. Carly calls Mercedes to summon her, Josslyn and Shawn home. Once they've returned, Carly tells Shawn, as much as she regrets it, she has to fire him. This way he won't have to worry about Jax bringing up his past during their custody fight. Shawn urges her to never stop fighting for her daughter and leaves. 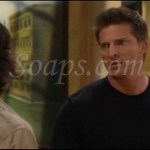 Jason arrives at the restaurant as Dante wraps up the investigation. Dante asks Jason not to retaliate against Anthony because it will only play right into his hands. Dante thinks the war between the families could kill Michael and urges Jason to let the cops handle it. After Dante has left, Jax stops by to tell Jason Shawn killed one of his own men in Afghanistan. He goes on to chastise him for not doing a background check before putting Shawn in charge of his daughter. Jax says this proves Josslyn is not safe around him. After Jax leaves, Jason calls Spinelli to get info on Shawn, as Carly enters. She regrets having to fire Shawn, but she has to protect Josslyn at all costs.

Shawn confronts Jax at the Metro Court about digging into his past to get at Carly. He warns that if he comes at him again, he will push back. When Jax taunts him about his time as a marine, Shawn punches him as Carly walks in.

Dante and Tracy meet at Kelly's to discuss Lulu. Dante tells Tracy she can't convince Lulu to give up on her father because she loves him. Tracy states, "So do I." She tells him she is selling the Haunted Star. Dante worries about Lulu in all this, but Tracy tells him Luke isn't coming back and a clean break is best for everyone. She hopes Lulu realizes that and can forgive her one day because she really does love her.

Dante shows up at the Star and learns that Nikolas gave Lulu the money to buy the place. Dante isn't as thrilled as Lulu had hoped. 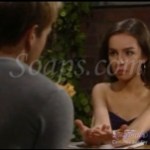 Michael meets Kristina outside Kelly's. He asks if she's going on a date because she looks different. She apologizes for her behavior towards Abby and asks if he can appeal to Sonny on her behalf about Ethan.

Sonny and Brenda continue to argue about the dangers of his business at home. Brenda just wants her son to have a good life and to be safe. Sonny wants that too because she deserves it. She cries as she says she's only happy when she's with him. Sonny promises her they will get through this. Through tears, Brenda notes she's a mom now and she has to think about Alec. Sonny believes he can give her and her son a good life, but she wonders, what about a safe life? He responds that there are no absolutes. She asks if he could do everything over again, would he change anything about the way he's raised his kids? There's a lot he would have done differently, but he believes he can give Alec a better life. Michael and Kristina stop by and Brenda asks them about growing up with Sonny, knowing he wasn't a normal businessman. They both say they couldn’t have asked for a better father. The kids leave and Brenda notes they really love Sonny and Alec will too. She just hopes love is enough. Later, Jason stops by to see Sonny. He gets filled in on what just what went down with Brenda and his kids. Brenda runs down the stairs to say she has the most incredible idea. She wants Sonny to retire and let Jason take over the business.

Shawn shares his past with Carly.

Lucky and Siobhan look for Luke.