Dante investigates, the Drakes get bad news, and Jax digs up some dirt. 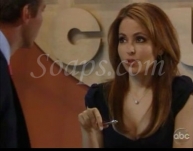 Jax asks Robin to the Metro Court and asks her to testify on his behalf in his custody case against Carly. Robin knows Jax is a devoted father, but she also knows Carly is a good mother. If she were to testify, she would have to admit that. After Robin leaves, Jax asks Olivia to keep a log of how often Jason and Sonny are there. Olivia doesn’t feel good about helping him keep Carly from her kid. Jax reminds her that she kept her own son from Sonny for most of his life. Regardless, Olivia can't be part of what he's doing and urges him to find some middle ground with his ex. Olivia walks away as Jax takes a call. He says, "What have you got for me on Shawn Butler?"

Carly watches as Shawn gets defensive with Patrick at the hospital. He doesn’t want to undergo surgery for an old shrapnel injury and certainly does not want to talk about his post-traumatic stress disorder. After Carly and Shawn have left, Robin finds Patrick. She knows Lisa said something to make him doubt himself and their marriage. She assures him she loves him and believes in them. Patrick wonders where this is coming from and she tells him about her conversation with Jax. She can't imagine how horrible it would have been had they gotten divorced and had to fight over Emma. Steve walks over and drops the bomb that Lisa escaped from Shadybrook. Worried, Robin suggests they check on Emma.

Back at the house, Carly asks Shawn about his PTSD, but he is reluctant to discuss it. Carly suggests they go out and Shawn loads up the gear in the car. Tracy stops by to ask Carly if she helped Luke leave rehab. Carly understands that Luke has a problem and is in denial, but she doesn’t blame him for taking off. After Tracy has left, Carly tells Shawn she has to be on a business conference call with Jax so he should take Josslyn to the park by himself. He agrees, but apologizes for being short with her earlier. She just hopes whatever he is dealing with, he's okay. Jax enters the house to give Carly some classified information on Shawn that claims he killed one of his own men while in the service.

Lulu summons Maxie to the Haunted Star to ask for her help in bringing the casino up to date and making it a success. Maxie is wary. She tells Lulu she needs to just accept that Luke continues to leave her and does not want to quit drinking. Lulu thinks he just needs a reason to come home and know that she will accept him the way that he is. Maxie leaves and Tracy boards. Tracy learns Lulu is trying to revamp the Star, but tells her that redoing the Star is another form of enabling. She then declares that she is putting it up for sale. 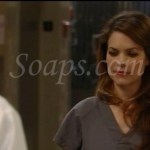 After getting distracted by a vision of Jake, Elizabeth learns from Matt that a patient's admission form did not include an allergy. Elizabeth says it's her fault, but Matt thinks it's a result of budget cuts and such. A guilty looking Elizabeth says she will fix it and find out who was responsible.

Maxie and Matt meet up at Kelly's. She shares her concern over Lulu's denial regarding Luke, but she understands not being able to get over people leaving you. He thinks she blames herself for her own parents leaving, but assures her she had nothing to do with it. She appreciates the sentiment, but since he wasn't there, she wonders how he knows it wasn't about her. He tells her how amazing she is and that any parent would be lucky to have her as their child. Across the room, Steve meets with Olivia and tells her Lisa escaped. He blames himself for not firing her months ago. Olivia defends his actions, which he appreciates.

Brenda brings Alec into Sonny's office, but finds the dead hit woman. She shields her son, as Sonny enters. He calls Dante to the scene and Brenda and Alec leave. Dante looks in the office and dryly says, "You got a corpse in your chair." Sonny thinks it's Anthony's doing. Dante suggests Sonny could be a suspect as well and they debate the circumstances of the woman's death. As Dante surveys the crime scene, Maxie stops by to suggest Dante talk to Lulu before she ends up in trouble.

Sonny returns home to Brenda, who is understandably upset. Brenda is worried for her and Alec's safety, but Sonny would never let anything happen to them. Brenda isn't reassured by that and tells him something has to change.

Tracy and Dante worry about Lulu.