Dante interrupts Brenda and Sonny at home as they argue about her role in his kids' lives. Dante tells them they have a suspect in Brandon's murder, so the pressure is off Michael and Abby. Dante leaves and Brenda thanks Sonny for letting her stay for that. She thinks if they are going to build a real relationship, she will need to learn more about what's going on with his kids. Sonny wants her in his life, but says they won't always agree on everything. She fears he doesn’t trust her and is reminded of how he used to always lie to her. He appreciates the sacrifice it takes to be with him and wants her to know how much he loves her. He wants to make it work no matter what it takes. She shares her fears about her being a mother to Alec and he suggests she take him to the ferry tomorrow. He'll meet them at the office and they'll go and have a great time.

Kristina calls Dante to meet her at Kelly's. She asks her brother to appeal to Sonny on her behalf about Ethan.

At Abby's, Michael tells Jason he won't work for Johnny if he can work for him and Sonny instead. Jason reiterates that it will never happen. Michael shares that he and Johnny already discussed the terms of his employment, which include staying away from anything to do with Corinthos business. Jason tells him it's a mistake, but it's not his place to control him. Jason loves him and will never turn his back on him. Jason leaves and Michael tells Abby he didn't want to turn his back on Jason, but he had no choice. Abby says that was the first time she has ever seen him be selfish. She suggests he honor Jason by building a life outside the mob. They debate his desire to have Jason's life. Michael says it's a perfect fit for him, but she doesn’t want anything to do with the mob and asks him to forget about it for her. Michael asks her to trust him, but she says if it means him working for Johnny then he needs to leave. A stunned Michael tells her he loves her but he can't let her control him. He walks out the door as Abby cries.

Alexis stops by the penthouse before the girls get there for a cheering up party for Sam. She warns her daughter that Molly is more than excited about the possibility of her having a baby. Molly arrives with baby names to suggest to Sam. Alexis tries to get her youngest daughter to back off, but Molly continues until she realizes Sam doesn’t want to talk about it. Kristina shows up and Alexis is aghast at her daughter's new fashion sense. Alexis calls her look a little hoochie mama, but Kristina assures her Maxie helped her picked it out. Molly thinks she looks great especially since Maxie works in the world of high fashion. Alexis thinks her dress is too short, her heels are too high and her bra is showing. Kristina turns to Sam for support, but she declares she is staying out of it. Molly doesn't help when she refers to Kristina as looking like a Kardashian. Kristina says she is old enough to decide what she wears and she likes it. Alexis counters that she pays for everything for her daughter and she doesn't like it. Jason walks in and Sam takes the opportunity to kick her family out. Once they're alone, Jason tells Sam he feels like he's losing Michael. 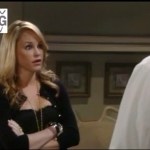 Lulu talks with the doctor at Shadybrook, who tells her Luke had every right to check himself out of rehab. He adds that Luke didn’t want his family notified and that he called a cab to take him away.

Lulu meets Dante at the loft and tells him Luke is gone. She doesn't know where he is, but she has to find him. She's upset with how they all handled the situation and fears what her father will do. Dante worries what she will do if she does find Luke and he doesn't want to come back.

After Anthony kills the hit woman, Johnny wants to call the cops. Anthony points out he killed her with Johnny's gun. Johnny relents and Anthony prepares to teach Johnny a lesson on how to turn a situation to his advantage.

Anthony has his men place the dead hit woman in Sonny's chair in his office.

Brenda and Alec get a surprise.

Shawn lashes out at Patrick.

What The Hell Are You Wearing?