The Den Father.
Dante was understandably leery of taking responsibility for Jason upon his release. Even Michael didn’t think Jason would return to prison. However, Dante's intent on nailing Franco, so he has to do what he has to do. Although, he's already got this hands full with Michael. Hopefully he'll be too busy with his charges to be distracted by a towel clad Brook. What do you think of their arrangement? Vote in our poll about Jason and Dante.

Boiling Point.
Patrick spun out of control last week as he hauled off and punched Steve. He said it was because Steve stole his patient, but I think we all know Lisa has a least a little to do with his hostility as well. Lisa is a conundrum to me as a character. Much like my feelings about Brooke, she's not defined enough and I don’t really know where she's coming from. One minute she's sincere and doesn't seem to have an agenda and the next she's scheming and manipulating, playing Steve and Patrick off each other. I know people aren't so black and white in real life, but I'd just like to get a clearer picture of her, or at least enjoy her enigmatic nature more.

The Spencers.
As big of a doofus as Luke has become, I really enjoyed his scenes with Lucky and Ethan at Lucky's apartment. Lucky was hilarious as he disdainfully listened to his father lay out his plan to win Tracy back. Ethan joining the conversation only added to the humor and it made me wish we saw more of the Spencer men together. Throwing Lulu into the mix wouldn't hurt either.

Savor the Moment.
Carly and Jax's scenes reminded me how much I enjoy them as a couple. I loved that she called him for help when she received a photo from Franco and told him he was right about Sonny. I'm sure that was hard for her to admit, but Jax certainly enjoyed it and was left to revel in his small victory. Skye's return hasn't had much impact on Jax and Carly, but I wonder how Brenda's return will sit with them. I can't imagine it will go over too well with Carly.

That's all I got this time around. What did you think of last week's events? Share your thoughts below and check out what awards GH took home at the 37th Annual Daytime Emmy Awards.

Last week a lot of truths and realities were acknowledged, while others were ignored, and the build up to Franco’s return continued.

Slow on the Uptake.
I thought it was pretty clear to everyone that Kristina was seeing Johnny to get at Sonny. Apparently Sonny doesn’t realize this though or else he would act like he didn’t care they were dating thereby rendering her plan null and void. Seems obvious enough. Speaking of The Don, first Max has to point out that Anthony will retaliate if he kills Johnny and then Mr. Sir insists Jason kill Anthony, as if being in jail wasn’t enough, now he wants Jason to risk going into solitary and extending his sentence. Is there a more selfish, oblivious character in Daytime? At least he had the courtesy to warn Luke about Ethan hanging out with Johnny when he blows him sky high. But does he not remember how Lily died?

Still Married?
I wasn’t entirely sure before, but I guess Jason and Brenda are still married? Or did Spinelli doctor things so Sam could get a conjugal visit with Jason? Please tell me below if you recall how their marriage ended, or didn’t. If they are still married, then that will just add to the fun of Brenda’s return. Regardless, I did enjoy their prison tryst. Mostly I think because Kelly Monaco and, especially, Steve Burton really convey their character’s desire for each other and it’s pretty hot.

The Divide Widens.
Maxie was the next one to get a photo from Franco and ran to Jason about it much to her non-husband’s dismay. I’m really tired of Spinelli’s attitude and don’t blame Maxie for going to Jason first – he takes care of everything after all – but I did understand Spinelli’s hurt over Maxie going to Jason instead of him about it. They had a very real, non-hysterical conversation, which I think was very revealing and will pave the way to a logical, organic end for the unconventional couple.

Brothers Corinthos.
Even though Michael seems to have done a complete turn around on his feelings for Dante, I’m enjoying their new roommate situation so far. Michael seems like a sensitive, thoughtful character and his big brother just might be the only grounded person he can talk to about his mobster father and scheming, vengeful mother. 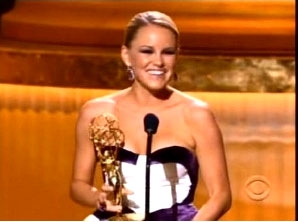