Dr. Noah Drake Goes Back On The Wagon 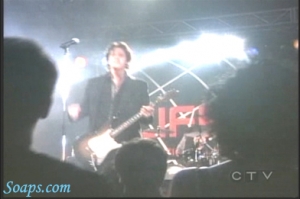 Can Noah and Bobbie rekindle? (ABC)

Now that Dr. Noah Drake (Rick Springfield) has fallen off the (vodka) wagon while flirting with the partying lifestyle of rocker Eli Love, will General Hospital pursue a public service storyline about the hazards of drinking after a liver transplant? Nope. The current TV Guide says that an ABC rep confirms that any such story has been “shelved”.

It could be because Rick Springfield’s much anticipated Working Class Tour takes him and his band to Australia through September 5 and then coming back to the good old U.S.A. through February. (You can see the cities and dates of his tour at Daytime GHs Rick Springfield to Perform!.)

Or, maybe the writers feel as if Lucky's addiction to pain killers last summer is too fresh in viewers' minds. (This is pure speculation, of course!) Past story lines that have included substance abuse problems involved Alan Quartermaine (Stuart Damon), A.J. Quartermaine (Billy Warlock) and Skye Chandler Quartermaine (Robin Christopher). Also included in this list are Sonny (Maurice Benard), who struggles with his desire to reach for the bottle, and Alexis (Nancy Lee Grahn). We can never forget when Alexis used marijuana to ease the side affects of chemotherapy, right? Granted, that wasn't an addiction, but it's possible that these past story lines factored in to the network's decision somehow.

In any case, seeing more of the original Dr. Drake -- as well as getting a glimpse of a much more playful side of him -- has been a pleasure this summer. Hopefully, the Powers That Be will pick up where they've left off with him when Rick Springfield ends his tour. After all, his final words to Patrick were that he has decided to "not live his life on hold" any longer. Dare we hope for a little romance in his future?