Former GH Stars: Where Are They Now? (Updated) 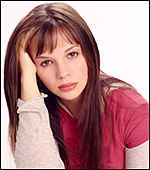 Ex-Roy Dilucca (Courtesy of A Martinez)

Soaps.com likee to keep track of our General Hospital “family”, so check back often to see what some of our favorite former cast members are up to.

Emily Quartermaine may be dead and all but forgotten (save for Nikolas, Monica, Jason, Liz and possibly Lucky) but her very first portrayer, Amber Tamblyn remains a very busy actress. The highly anticipated Sisterhood of the Traveling Pants 2 was released this week and stars Amber as loveable Tibby. Also in the film are America Fererra (“Ugly Betty”), Alexis Bledel, Blake Lively and Blythe Danner. Amber can also be seen in early 2009 in an upcoming TV drama for ABC called “The Unusuals.” She will play Detective Casey Shraeger and will be directed by Stephen Hopkins (who has directed episodes of cult hits such as “Californication” and “24”.)

A Martinez (ex-Roy Dilucca) will be joining the cast of One Life to Live later this month. Exec Producer of the soap, Frank Valentini is said to be thrilled to have the chance to work with the soap vet. Complete details were reported on Soaps.com last month.

Let's see who else we can find!

With all of Alexis's talk of her daughter Kristina, it's time we check in with her namesake, Alexis's dead sister Kristina (played by Jaime Ray Newman). Since her character was killed off in a car bomb (set by Luis Alcazar) meant for Sonny in 2003, Jaime has been very busy. She was in Steven Spielberg's Catch Me If You Can opposite Leonardo DiCaprio and appeared on "Criminal Minds", "Heroes" and "Veronica Mars." She was also in the critically acclaimed dark satire LA play called "Turnaround" with David Schwimmer, Jonathan Silverman and Tom Everett Scott. Jaime is also a talented musician and her band "School Boy Crush" plays regularly at The Buffalo Club in Santa Monica, "Moomba" in West Hollywood and "Nick's Martini Lounge" in Beverly Hills. The band performs everything from funk, soul, R&B and the blues.

Jonathan Jackson (Lucky #1) is hard at work on his music career. His band is called Enation and they've recently released their first album, "Identity Theft." Jonathan and fellow actor Richard Lee Jackson formed the band after playing together for seven years. The band recently performed the halftime show at the NBA's Trailblazers & Spurs game in Oregon. Enation also had a gig at LA's Whisky A Go Go in which Tony Geary (Jonathan's GH dad Luke) made a surprise appearance.

Jonathan hasn't given up his day job either. He recently appeared on Fox's "Terminator: The Sarah Connor Chronicles" as a character named Kyle Reese. He was also in the big screen's "Dirty Dancing: Havanna Nights."

On a personal note, Jonathon is married to Lisa Vultaggio, who played GH's Hannah Scott (Roy Dilucca's daughter) from 1999-2001. The two met on the set, married and now have two children, Caleb and Adora.

If you've played the Soaps.com Trivia Game yet, you'll see the name "Chloe Morgan" appear from time to time. The lovely Chloe was one of many who have stolen Jax's heart over the years and Soaps.com couldn't help but wonder what her portrayer, Tava Smiley, has been up to since leaving General Hospital in 2001. In short - a lot. She has spent a lot of a time in front of the camera as an actress but also as a host. Her first gig came right on the heels of leaving GH. She joined James Cameron (the Oscar-winning Director of "Titanic") and took the role as an adventurer host for live-stream videos of the filming of a documentary that Cameron was making about the sunken luxury liner. She has hosted a TV show called "Clean Sweep", served as a correspondent for TV's "Extra", hosted E's "Wild On" series that covered various resorts, cities and countries and is currently the host for The Auction Network.

Tava writes a blog on her website and has this to say about her career, "So much has happened in my life. I'm enjoying all of my work, and have been lucky (as has been the case for the last few years) to have been afforded a lot of travel with my various jobs. In late September, I went on an amazing trip to South Africa. It was my first time there and I loved it! I was sent to Capetown by the Auction Network to cover two wine auctions and a real estate auction. The wine auctions were full blown events and really fun and quite exciting. I even ended up bidding on (and winning!) a couple of cases of wine."

Tava has spent time playing other people as well in the midst of all her hosting jobs. She was cast to appear in a film called "Human Contact" (Jada Pickett-Smith's directorial debut) and will appear in a horror flick this year called "Pear Blossom."

Congratulations Tava on what sounds like a successful and very fulfilling "live after GH"!

Soap vet Maree Cheatham (Stephanie Wyatt on "Search for Tomorrow", Sister Marie Horton on Days of Our Lives, and finally Lucy Coe's beloved Aunt Charlene on General Hospital, as well as "Port Charles") continues to be a busy lady since her last appearance in Port Charles in 1997.

Need a reminder of who exactly Lucy Coe's Aunt Charlene was? Well, she was the woman who raised the whacky-librarian-turned-diva and who supported her during most of her foibles. In fact, Aunt Charlene was the person who set up Lucy with first husband Doctor Tony Jones. This was after she slept with Bobbie's husband Jake and before she stole Alan away from Monica. Can you just hear Lucy saying, "Aunt Charlene, what should I do now?"

Since leaving the soap world, Ms. Cheatham has been in feature films such as "Mr. & Mrs. Smith" and "The Wedding Singer" and been on TV in projects that range from "Monk", "Desperate Housewives" and "Boston Legal." If you have kids, you might have recognized her on Nickelodeon's "Drake & Josh" or if you are an FX junkie, you might have spotted her on "The Riches" starring Minnie Driver.

Remember Bobbie Spencer's husband, attorney Jake Meyer? He was one of the good guys in the 80's (well, except for his one-night affair with Lucy Coe) until he left Port Charles to do good works or some such thing. His handsome portrayer, Sam Behrens, has gone on to enjoy a prolific career in front of and behind the camera. He left General Hospital in 1987 and appeared as twisted Danny Waleska on "Knots Landing" for a year. Soap fans will likely remember him on "Sunset Beach" in the late 90's and most recently appeared as Ken Scott on "The Closer" in 2007. As for behind the scenes work, he is now a director. He partnered with his wife (Shari Belafonte) on a short film and has also been learning special effects. He says that it's like learning to speak a new language but enjoys the challenge. As for future work in daytime? He has said that he'll never rule anything out! And, since Jerry Jacks hasn't seemed to bother to check in (ex-fiancé) Bobbie, perhaps it's time for her long-lost husband Jake to return, right?

Even though Epiphany is struggling with her grief for her dead son Stan, his portrayer, Kiko Ellsworth, is doing just fine! Specifically, he appeared on the critically acclaimed SHOWTIME original series Dexter for four episodes in the fall of '07. His recurring role of Bertrand, the lieutenant's fiance, ended having her choose between her job and him. The final episode completed his storyline so unless you're looking to buy the DVD when it comes out, Kiko's days of working with that particular serial killer are done!

Here's a name from the good old days - Kevin Collins! His handsome portrayer, Jon Lindstrom, is busy these days with various projects. He has directed episodes of As the World Turns, All My Children and One Life to Live. He also co-wrote a screenplay (that he exec-produced) for a film called "The Hard Easy" (starring Bruce Dern, Gary Busey and Nick Lachey) which was just released on DVD. And - he's about to start work in front of the camera again. He'll star in an indy film called "Double Born" and "The Sitter" from the Lifetime network. He's also appeared on CSI and Everwood since leaving General Hospital and spin-off Port Charles in 2003. Would he consider coming back to GH now that his old buddy Kin Shriner (Scott Baldwin) is back? One can only hope!

For a look at our archived "Where are they now?" article, go here: (Where Are They Now? Archives).

Soaps.com plans to add to this column from time to time, so if there is anyone you would like Soaps.com to track down for you, let us know!