Elaborate on your thoughts regarding James Franco and "Your Highness" with Soaps.com. 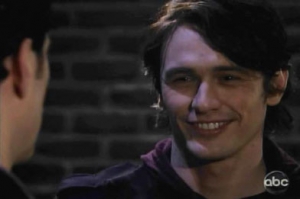 From deranged artist to royalty.

Aside from appearing on General Hospital and in the film Eat, Pray, Love, James Franco (Franco) has joined the cast of the film “Your Highness.”

“Your Highness” is a fantasy comedy about a lazy prince and his heroic brother who must save their father’s kingdom. The movie also stars Natalie Portman (“Brothers”), Zooey Deschanel (“500 Days of Summer”), Justin Theroux (“Parks and Recreation”) and Danny McBride (“Pineapple Express”).

Your highness is set for an April 2011 release.