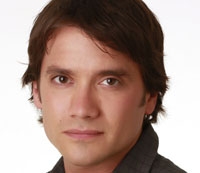 The little girl is named Anbilliene and weighed in at 7 lbs., 10 oz. She was born three days after Linda’s due date.

Following in Derk Cheetwood, Jonathan Jackson and Ted King‘s recent footsteps, Dominic Zamprogna is the latest General Hospital star to become a proud parent. As reported by Soaps in Depth, his wife Linda gave birth to their daughter at 5.29 AM this morning. The Zamprogna’s have yet to reveal the baby’s name.

Soaps.com congratulates the first time parents. Vote in our poll about Dante below and join Soaps.com on Twitter @soapoperafan, “like” Soaps.com on Facebook to dish on General Hospital, all the other soap operas, Glee, Grey’s Anatomy and Vampire Diaries!

According to Soaps in Depth, GH‘s Dominic Zamprogna (Dante) is going to be a dad.

He and his wife Linda, who were married in November 2009, are expecting their first baby, a girl, later this year.