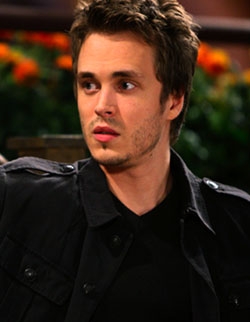 Soaps In Depth is reporting that Jonathan Jackson’s baby was born on October 7 at 1.11 PM. He weighed in at 7 lbs, 1 oz and was named Titus Gabriel.

Our congratulations go out to Jonathan and Lisa!

We invite you to join Soaps.com on Twitter @soapoperafan, “like” Soaps.com on Facebook to dish on General Hospital, all the other soap operas, Glee, Grey’s Anatomy and Vampire Diaries!

His character Lucky may not know he’s about to be a father on General Hospital, but Jonathan Jackson is preparing for his third baby with wife Lisa Vultaggio (ex-Hannah).

Due in October, the couple’s newest arrival will join brother Caleb, born in 2003, and sister Adora, born in 2005.

Soaps.com congratulates Jonathan and Lisa on their great news! Did you know Jonathan and his band released a CD? Check out Jonathan Jackson’s Band Enation Releases Live CD..