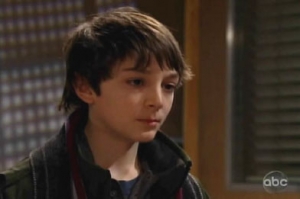 Hot on the heels of Michael being recast on General Hospital, comes news his brother Morgan will soon take on a new look as well.

As explained by ABC, “Due to a scheduling conflict with an upcoming pilot for Aaron Refvem, Aaron Sanders has now been cast in the role of Carly and Sonny’s son Morgan, starting on April 14, 2010. “

Elaborate on your thoughts regarding Morgan's recast with Soaps.com below. In light of all of the current casting news, did you vote how you felt in our Georgie's Return Poll?