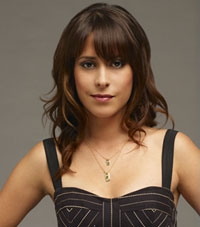 “Nice Guys Finish Last” won best student film at the California International Shorts Festival. It can be seen on September 17 at The Promenade Playhouse at 1404 3rd St. #8 in Santa Monica, CA. It will screen with other short films from 2.30 PM – 4.50 PM.

Kimberly McCullough recently tweeted that her short film will also be screened at The New Orleans Horror Film Festival the weekend of October 28. The film festival will be held at the Inn on Bourbon in the French Quarter.

Kimberly is hosting a viewing of her short film “Nice Guys Finish Last.” Held at Palazzo 53 in Pittston, Pennsylvania, fans can enjoy dinner, the movie and a Q&A with the actress/director. The cost is $40 per person. To pre-register, go to Dinner With Kimberly.

To get a sneak peek of Kimberly’s film, watch the Nice Guys Finish Last trailer on our sister site Soap Opera Fan Blog.

Kimberly McCullough has landed a new gig, but fans of Scrubs don’t have to worry, as it will not interfere in her role as Robin Scorpio on General Hospital.

The actress recently posted on Twitter and Facebook that she has been accepted into the AFI Directing Workshop for Women 2010, but assured her fans, “I am not leaving the show. Will be tackling both at the same time. Thank you for your words of encouragement!”

Soaps.com congratulates Robin on her new venture and is happy to hear she will be sticking around Port Charles. Did you catch Jason Thompson and Kimberly McCullough’s Dr. OZ video Q&A?