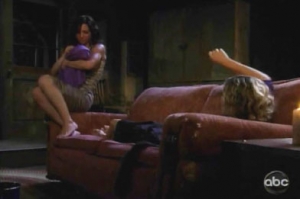 The Daytime Emmy Pre-Nominations are out so take a look and find out if your favorite GH actors made the list.

You can also remind yourself of the plots the actors’ characters were in by reading our brief summaries. Keep in mind that many of these characters were also involved in the toxic biosphere, carnival and karaoke storylines.

Lead Actor pre-nominees Maurice Benard (Sonny Corinthos) and Anthony Geary (Luke Spencer) got the early nods, as they both had big years with their characters’ children. After taking back control of his organization, Sonny dealt with his son Michael waking from his coma and learning that his wife was the one who set the shooting, which landed him in said coma, in motion. He also tried to forge a relationship with Kristina and protect Michael after he killed Claudia in self defense. Meanwhile, Luke discovered he had a child he never knew about in Ethan, was kidnapped by Helena, counseled Lucky, and discovered Nikolas and Elizabeth’s affair.

In the Lead Actress category, Sarah Brown‘s Claudia Zacchara Corinthos battled with her father, Anthony, had an affair with Ric while still married to Sonny, suffered a miscarriage, sicced Jerry on Michael and Kristina, was outted as the one behind the hit that landed Michael in a coma, and was killed by Michael after taking Carly hostage. Meanwhile, Laura Wright‘s Carly Jacks became pregnant and endured a risky pregnancy to give birth to her and Jax’s daughter Jossyln. She also welcomed her son Michael back from his year long coma and learned that Jax knew about Jerry and Claudia’s involvement in Michaels’ shooting. As mentioned above, she was kidnapped by Claudia, but rescued by her son Michael.

The Supporting Actor category saw Bradford Anderson‘s Damien Spinelli getting investigated by feds, wooing Maxie in a courtly manner, having the best non-wedding to Maxie Port Charles has ever seen, and dealing with Maxie’s one night stand with Franco. As for his fellow pre-nominee, Jonathan Jackson‘s Lucky Spencer worked hard at making a life with Elizabeth, even though he worried about her strange behavior, grappled with his relationship with his father Luke, and teamed up with Dante to get Franco, once he figured out he was a cop.

The Supporting Actress category had Carolyn Hennesy's Diane Miller continuing to be a friend to Alexis, legal counsel to Sonny and Jason, and lover to Max. She also doled out her special brand of romantic advice to Spinelli from time to time. At the same time, Rebecca Herbst's Elizabeth Webber began an affair with Nikolas, while she got back together with her ex-husband, and Nik's brother, Lucky.

In the Younger Actress category, Julie Berman's Lulu Spencer and Kirsten Storms' Maxie Jones, continued to pursue their careers at Crimson. Maxie also imagined what life would have been like if she had died and BJ had lived and finally gave into her feelings for Spinelli and became his non-wife. However, she cheated on him with Franco, but desperately tried to make it up to him. Lulu, meanwhile, broke up with Johnny and fell for undercover cop Dante, while also getting to know her new brother Ethan and searching for Luke after he was kidnapped.

In the Younger Actor category, Drew Garrett debuted as the SORASed Michael Corinthos, Jr., who had to deal with his anger issues after losing a year of his life to a coma. He desperately wanted to join his father's mob business, but was frustrated by Sonny's repeated refusals. He accidentally killed Claudia while trying to prevent her from kidnapping his newborn sister Josslyn and harming his mother Carly. As for his counterpart in this category, Nathan Parsons' Ethan Lovett came to town to seek out the father he never knew, who turned out to be Luke and also learned Holly Sutton was his mother. He also helped Rebecca in her attempt to con Nikolas and the Quartermaines and eventually struck up tentative relationships with his siblings Lucky and Lulu.

Are you happy with the list of pre-nominees or do you feel someone is missing? Share your thoughts with Soaps.com below and check out the pre-noms from other soaps for the 37th Annual Daytime Emmy Pre-Nominations.