The other big storyline this week involved Lucky and Liz continuing to work through the fallout of her indiscretion. This coincided with Valentine’s Day, and Lucky rescuing Liz years ago on that day after her rape. I absolutely loved seeing the flashbacks of the two. It’s amazing how young they look! Lucky is obviously very hurt. However, drinking is not going to solve his problem. It was nice to see Luke giving Lucky fatherly advice. Luke told Lucky that sometimes it is easier to be in love with who a person once was, rather than the person they are. For these two, truer words couldn’t have been spoken. It was true for Luke and Laura, and Lucky admitted that maybe he hasn’t moved on from that moment where he rescued Liz on Valentine’s Day. Liz handled her guilt erratically. She was livid with Patrick and Robin for not helping her get her job back, and then had an uncomfortable visit with Luke when she begged for his help with Lucky. Another low moment was when she laid into Sam for being granted forgiveness for her indiscretions and wondered why she couldn’t have the same thing. Sam very calmly told her she needed to forgive herself first. Both Lucky and Liz have a long history together and have gone down very different roads to become different people than they were in the flashbacks. If they can accept who they have become and their mistakes, perhaps they can find their way back to one another.

Liz should probably have gone to Maxie for advice. Maxie keeps bringing up her indiscretion with Franco, but Spinelli begged her to just let it go. For now, she has let it go and decorated her apartment for a Valentine’s Day surprise, like Lulu so comically put it, as “Planet Fetish.”

Lastly, Carly told Sonny she was the one person who knew him better than anyone else and would always have his back. They embraced, and on cue, Jax walked in to witness it. Jax told Carly that she was throwing herself at Sonny to get back at him. I’m not sure what Carly really wants at this point, but catty comments like that would not have me racing back into Jax’s arms!

Thanks for tuning into the show and reading my thoughts for this week. Lori will be back next week for her brilliant insights on the show! Credit: Recalling The Past. (Soaps.com)

After action-packed weeks in Port Charles, this week spent time with relationships. There was a lot of talk about how Sonny became the man he is, Dante at a crossroads, and Lucky and Liz figuring out what they mean to one another after her indiscretion.

A recurring storyline is the complicated story of Sonny and how he became the man he is. In an effort to reach out to Dante, Sonny detailed his abusive childhood and how now he will do anything to protect his children. Sonny made an interesting point when he said that prisons are full of people who had troubled childhoods. It’s so true that children are very fragile and absolutely shaped by their environment. Sonny has made it clear he will do whatever it takes at all costs to protect his children. However, at what point is Sonny’s world of crime going to negatively impact his children? On the converse side of this, Jax argued to Michael that he understood why Sonny became the man he was, but it doesn’t absolve him from living dangerously. There is no doubt that Sonny will never allow anyone to get away with harming his children, as any parent would. Yet, is the violent cycle he was exposed to as a child repeating itself?

It was interesting seeing how Sonny’s two sons, Dante and Michael, tried to handle their predicaments. Mac visited Dante in the hospital and after discussing his firing over not turning Sonny in. Mac pointed out that Sonny’s organization wouldn’t hesitate to kill him. Dante feels he is in a no-win situation. He told Sonny that biology means nothing to him, but why didn’t he rat Sonny out after months of trying to bring him down if it means nothing to him? Meanwhile, poor Michael tried to turn himself in for Claudia’s murder, but Mac wouldn’t let him! He’s trying to do the right thing, but everyone is ordering him to keep quiet. It will be interesting to see the decisions Sonny’s sons make in the coming weeks. 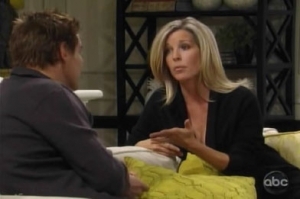