While I still adore the little girl, I'm over Molly's precocious act. It was cute for a while, but now it's too much, so I would like her to stop trying to get Sam and Jason together, because guess what Molly, they already are.

Lulu was great all week going off on Jason and Sonny, as well as sitting by Dante's bedside willing him to live. I absolutely loved when Dante woke up and said, "Hi beautiful. It's good to see you." Sigh.

As for non Dante stuff, Mac and Lucky's scene at Jake's was really good and I loved Mac empathizing with Lucky over being cheated on, which was funny because Felicia cheated on him with Lucky's dad. That's been a long time though and really highlighted how lonely Mac must be, because has he had any action since then? While I enjoyed Mac reaching out to Lucky, I had to question his decision to send him over to get Dante's statement after finding him drinking in a bar.

However, once Lucky did question Dante (Okay, so it is still Dante stuff) and he made up a ridiculous story about accidentally shooting himself, Lucky had a great reaction: "Good luck getting anyone to believe you." He then suggested Dante find some gunpowder residue to rub on his hands in case Mac wanted to test it. Good stuff.

Michael telling his siblings and cousin about killing Claudia was another great scene between all the young actors. They are all really good and whereas I am tired of Molly's attempts at matchmaking, I enjoyed her intelligence and straight talking, before Michael confessed, when she pointed out no one would doubt Sonny's guilt over killing Claudia. Of course little Morgan's shocked and devastated face, along with Molly's, really sold the scene when Michael finally owned up to what he did.

After that emotional realization, Kristina called her oh, so comforting boyfriend over for support and got slapped instead. I hope they keep the momentum of this storyline going and address it on Monday's episode instead of glossing over it by not mentioning it like they often do.

I still don't care about Lisa and wanted to slap her when she was eyeing Patrick changing in the locker room. I also don't much care about Patrick and Steve's rivalry. I like Patrick and I like Steve, but their posturing doesn't do it for me. Scott Reeves (Steve) was just placed on contract, so hopefully he'll get more of a story now.

That's it for me this time around. What did you think? Feel free to share your thoughts on last week's events below. To find out what's going to happen this week, please view our GH Spoilers.

I wasn’t sold on Sonny’s 180 where Dante is concerned. Yes, he now knows Dante is his son, but he is still a cop who was trying to bring him down and essentially betrayed him. Even though Sonny is all about his children, or so he likes to say, he should have some conflicting issues about embracing his son, who is on the opposite side of the law and who was trying to arrest him. Sonny saying he loved Dante as he was being dragged off in cuffs was way too soon and completely unbelievable. Besides, will Dante even care if Sonny loves him? He shot him and Dante loathes what he stands for. Also, Sonny threatening Steve to make sure his son lived was ridiculous. Dante’s life wouldn’t need saving in the first place if it weren’t for him, so he really has no room to make threats.

I’m also really tired of Sonny saying the shooting was all a mistake because he didn’t know Dante was his son. That does not excuse the fact that he shot an unarmed man, who happened to be a cop, who was arresting him. I was really happy to hear Carly and Diane repeatedly remind him of that because he’s acting like the fact that he didn’t know they were related absolves him of trying to kill him.

Morgan and Carly’s reaction to learning Dominic was a cop was more subdued than I expected. I thought Carly would be furious and Morgan would feel more betrayed. Although, I loved when Morgan went to see his brother in the hospital to ask if their friendship was all part of his cover. I seriously love that kid. He’s so sweet and his eagerness at wanting a relationship with Dante pulled at my heartstrings.

Michael’s reaction to Jax was to be expected and I loved that he got a punch in before Jax sort of subdued him.

I didn’t understand the cop timeline in the whole thing. It was a funny scene with Sonny sitting next to the cops in the hospital, but they didn’t do anything. Were they there on another case and just happened to sit next to the mob boss who shot his son? If not why didn’t they question him or bring him to the station? Why did it take Raynor and Ronnie so long to come to the house to assess the crime scene? I was also surprised that no one seemed to bat an eye, expect for Sam much later, when Ronnie was revealed to be a cop as well. When he arrested Sonny, Jason rolled his eyes, but I assumed that was because Sonny was being arrested for Claudia’s murder at such an inconvenient time. Maybe it was in reaction to Ronnie, but Sonny didn’t say anything about having another one of his ‘soldiers’ try and arrest him. It wasn’t until Sam pointed it out at the penthouse when Ronnie came by to look for Sonny’s gun, which she took, but even then it was like an after thought.

I did love both Epiphany and Ronnie’s reactions to learning Sonny was Dante’s father. Stunned, Epiphany dropped whatever she was carrying, and exasperated, Ronnie rolled his eyes. A little humor is always welcome in such a serious storyline. 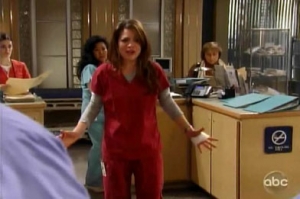 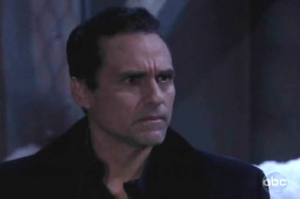