A: Rick laughed! He said he was the one to get the idea in his head, so hes okay with it! Julie and Rick laughed a little more about that and she told him she still sees Blackie (John Stamos (ex-Blackie, GH) on Full House reruns with his big black mullet!

Q&A: The fans were curious, as was I, if he'd ever done Broadway and he admitted, he had done 'Smokey Joes Caf. He admits, It was the most nervous Ive ever been in my life. Id do it again in a heartbeat.

Q&A: Julie asked, "Since you recently celebrated your 22nd anniversary, what would you say is your secret to a long happy marriage?" Rick replied, "Don't get divorced. Stay in for the long haul. It will be worth it."

Q: Julie asks, "Tell us about your working relationship/contract terms with GH."

A: Rick replies, Im a free agent. I can go touring, and then they try to work me in when Im back. Its very, very open." (For all you GH fans, the show tapes two weeks in advance!)

Q: We remark, "How about how uncanny it is that Jason Thompson (Dr. Patrick Drake) has such a strong resemblance to you!?

A:"Jason is great to work with and the relationship is pretty natural for me being a dad myself. Casting my son would have been an interesting casting call to be in on."

Q: We asked, "When on tour, when not performing or resting, how in the world do you spend your time?"

A: Rick tells us, "There is no 3rd thing. It's either playing or sleeping. Occasionally we will party a little!"

Q: And, just for you Rick fans, we asked Rick, "What would you like to say to your loyal fans, who have followed you since you first hit "heart throb" status? (None of us are giggling teens anymore!)

A: "I am always humbled and really pleased that people are still connected to my music. That's the real reason I still tour." 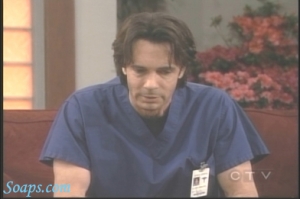 Rick Springfield (Dr. Noah Drake, General Hospital) is not only a soap star. He’s also a musician. Last time we spoke with Rick, he was busy building a recording studio in his home, trying to fill the empty gap of the empty nest since one of his sons went off to college.

Rick Springfield spoke with Julie Clark Robinson, B&B and General Hospital Editor back in November Exclusive Rick Interview and we promised to follow up with a few extras that he shared with us, and to get a few Q&A’s posted for the fans!

As reported previously, Christine Fix, Editor-in-Chief, Editor of Days of Our Lives spent some time in “Rick Chat,” which is an online chat, based out of Rick’s website, Rick Springfield for fans to get together to discuss the fabulous musician. The fans gave me a few questions for Rick that they wanted to see answered. Unfortunately, my schedule didn’t permit me the availability to speak with Rick directly, so Julie was kind enough to get the scoop, just for the fans! Here goes:

Q: Do you ever visits sound checks in the LA/Malibu area.

A: Rick tells us that this isn’t the case. In fact, he was puzzled by the question.

Q&A: We asked if he ever pops into the chat room on his website, and he tells Julie, “No, but I can!

Q&A: The fans asked him to comment about his Vegas show, EFX Alive. He tells us, “It was something that just came around at the right time.” Vegas opportunities had been offered to him for about the last 5 years, but this one came at a good time for him to be able to do it. It lasted for 2 years. He didnt move to Vegas, went back and forth to LA.

Q: The big question that made us all laugh and the one that I wasn’t sure I wanted to ask, “Whose idea was it for you to have a mullet in the 80s?”

Autobiography about Anna Lee Due out this summer