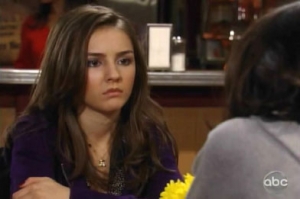 General Hospital‘s Kristina Davis is currently involved with an abusive boyfriend, while also dealing with the reality of having a mobster for a father. I recently talked with Kristina’s portrayer, Lexi Ainsworth, to find out how she feels about her dramatic storyline and working on the ABC soap.

After about eight months of playing the SORASed Kristina, Lexi reflected, “Since I’d never been on a soap before I didn’t really know what to expect, but it’s been great. I love working with everyone. It’s like a big family.”

Upon her introduction as a teenager, Kristina grew into a bit of a wild child, as the newly aged teen flirted with Jason (Steve Burton) and snuck pot into a previously comatose Michael’s (Drew Garrett) hospital room. Since then, she’s morphed into somewhat of a good girl, but with an abusive boyfriend. As for why her character is so different now than when she was reintroduced in the middle of last year, Lexi offered that Kristina was going through a phase early on, but subsequent events, such as Claudia’s accident and going on the run to Cancun, facilitated a change in her.

Concerning her thoughts about playing out the teen abuse storyline, Lexi said, “I think it’s great. I have lots of fans that write to me about being in abusive relationships and they can relate to my character, so I think it’s a great opportunity for me to portray this character.”

Kiefer’s abusive attitude towards Kristina has been building for months, but it seems more attention is now being paid to the tumultuous teens. For what viewers can expect, Lexi previewed, “They’re doing it in real time, as a real relationship would kind of progress. It’s going to definitely come to a head. It’s going to get more violent as these types of relationships do and it will be something big.”

In order to prepare for her portrayal, Lexi explained, “I’m doing some research. I saw the Rihanna interviews and I listened to some radio stories about that. I’m trying to get inside her head to see what it’s really like, because I’ve never been in an abusive relationship, fortunately.” (For more on her research, read our follow up interview in the GH News Room.)

So why does she think Kristina stays with Kiefer? Lexi mused, "For a lot of reasons, but I think the main factor is she really does love him. She's a teenager and this is her first relationship so she's kind of confused as to what love is because of her father and she's not quite sure how these types of relationships work because she hasn’t had the best role models."

Similarly, she believes Kiefer (Christian Alexander) doesn't know what love is either, as he comes from a family who has instilled a feeling of entitlement in the young man. Of course, Kristina's crush, Ethan, is also a factor and a frequent source of Kiefer's anger. While she's not sure where they are going with Kristina's connection to the older man, Lexi feels he is both flattered and amused by her attention and is there to help with her rocky relationship.

Many fans have wondered if Kristina and Ethan will eventually be paired together, to which the 17 year-old Lexi speculated, "I wouldn't have a problem with that, but I'm not sure what they're going to do. Some [fans] worry about the age difference, but a lot of people think he's older than he actually is," which for the actor, Nathan Parsons, is only 21.

Kiefer isn't the only issue for Kristina, as her mobster father's actions don't sit too well with her either. As for whether she will ever be able to reconcile what Sonny does for a living, Lexi stated, "She's trying and as long as he shows that he cares about her and loves her and crazy incidents don't keep happening where she's a witness, I think that will definitely help the relationship. She does love her father, it's just hard for her to see him doing what he does."

Thankfully, it's not all gloom and doom for the teenaged Davis girl, as her relationship with her sisters, Sam and Molly, and mother, Alexis, are bright spots for the character, as well as the actress. "They're so much fun. I love working with them. Nancy (Lee Grahn, Alexis) is hilarious, she always cracks me up. [Kelly] (Monaco, Sam) and Haley (Pullos, Molly) are like my sisters. It's a great cast. I love it."

Further questioning her about her castmates, I wondered if she had a favorite person to work with or onscreen relationship she favored over others. Lexi responded, "It's tough to say. I like working with all of them, but Drew's (Garrett, Michael) fun because he's close to my age. I love working with Maurice (Benard, Sonny), he's a great actor and he helps me. Nancy's fun. I don't know. I love working with everyone."

When it comes to her offscreen life, Lexi recently passed the California exam to graduate from high school early and has enrolled in online college courses. When she's not studying or working, she enjoys what most other teens do: hanging out with friends and going to the movies. However, she also thoroughly enjoys traveling, as her most recent trip took her to France with her family. "We've had multiple foreign exchange students in the past, so we like to meet up with them, stay with their families and travel around."

While her onscreen life may be in turmoil, it sounds like Lexi's personal life is doing just fine. Stay tuned to see what happens with Kristina and Kiefer and keep an eye on the spoilers for a sneak peek at what's to come.