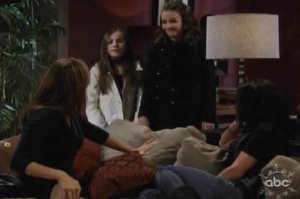 We’re back with the latest installment of our fashion scoop with GH‘s Head of Wardrobe, Mary Iannelli!

Jan S & Misah J: I was wondering where I could get Maxie’s outfit from December 28?

A: Maxie’s outfit: coat by Alice & Olivia, her sweater is by Rebecca Taylor, the tank is by Cosabella, her jeans are by Frankie B., her boots are by Promiscuous, her purse is by Alfani, and her jewelry is by Forever 21.

Sue A & Jen V: Can you tell me where I can find Sam’s entire outfit from the December 28 episode, including her boots?

A: Sam’s entire outfit consists of: leather jacket by Domo, shirt by James Perse, vest by Grai, jeans by Ever, & boots by Vince Camuto.

Stacie C: Who made the red sweater that Robin wore on December 23?

A: Robin’s sweater is by Leifsdottir from Anthropologie.

Becky M: Who makes the red strapless long dress with front ruffles that Lulu tried on at the beginning of the December 28 episode?

A: Lulu’s red strapless dress is by BCBG.

Chandra M: Can you please tell me which designer coat Kristina was wearing on December 28 & 29?

A: Kristina’s coat is by Leifsdottir from Anthropologie.

Linda P: Where is the sweater from Kristina wore on December 30? It was black with puffed short sleeves and cream lace on the front.

A: Kristina’s sweater is by Plenty.

Joyce C: Could you please tell me who designed and where I can purchase the dress Robin wore on December 30? The color looks like Eggplant, with a black belt and one sleeve.

A: Robin’s dress is by Alice & Olivia.

Tyler D: Where did you get the black coat with ruffles that Maxie wore on January 5 & 6 when she was in Franco’s studio?

A: Maxie’s black ruffle coat is by Le Rok.

Kameelah O & Kristin P: I was wondering where Elizabeth’s magenta ruffle coat was from that she wore on January 7.

A: Elizabeth’s magenta ruffle coat is by Plastic Island.

Belle D & Andrea P: What kind of boots did Sam wear when she was is in the glass cage?

A: Sam’s boots are by Miss Sixty.

Daryl E & Kristina J: Can you tell me where I can get the grey sweater Carly wore on January 6 & 7?

A: Carly's grey sweater is by Vince.

Freda G: Can you tell me who designed Lulu's light grey and violet animal print cardigan from December 28?

A: Lulu's animal print cardigan is by Rebecca Taylor.

Cynthia: Where can I purchase the black glitter gloves recently worn by Lulu?

A: Lulu's black glitter gloves are by Echo.

Asheta S: Where can I get the off-white and black lace dress Maxie wore on January 8?

A: Maxie's off white & black lace outfit is 2 pieces: a tank  and a skirt. Both are by D&G.

Rebecca F: What is the brand and where can I purchase the black leather jacket Lulu wore on January 12?

A: Lulu's black leather jacket is by Bebe.

A: Sam's tan leather jacket with knit wide zip collar is by Domo. Jason's jeans are by Diesel.

Michelle H: Where can I purchase Kristina's gold heart necklace she wore when she went to Sonny's to decorate the Christmas tree?

A: Kristina's gold heart necklace is from Nordstrom.

Angela B: I was wondering who makes the cardigan and camisole Elizabeth wore during the week of January 4. It was navy blue with yellow ribbon on the right side of it and the camisole was yellow and looked silky.

A: Elizabeth's cardigan is by Sparrow from Anthropologie. Her camisole is by Club Monaco.

Michelle R: I would like to know where I can get the grey wrap sweater that Olivia wore on January 14.

A: Olivia's grey sweater is by BCBG.

Stop by our Latest News room to see what kind of soapy questions have been asked in Soaps.com Answers Fans' Questions!