General Hospital Exclusive: On Her 10th Liesl-versary, Kathleen Gati Reflects On ‘a Few Gratuitous Kidnappings and Poisonings’ and More 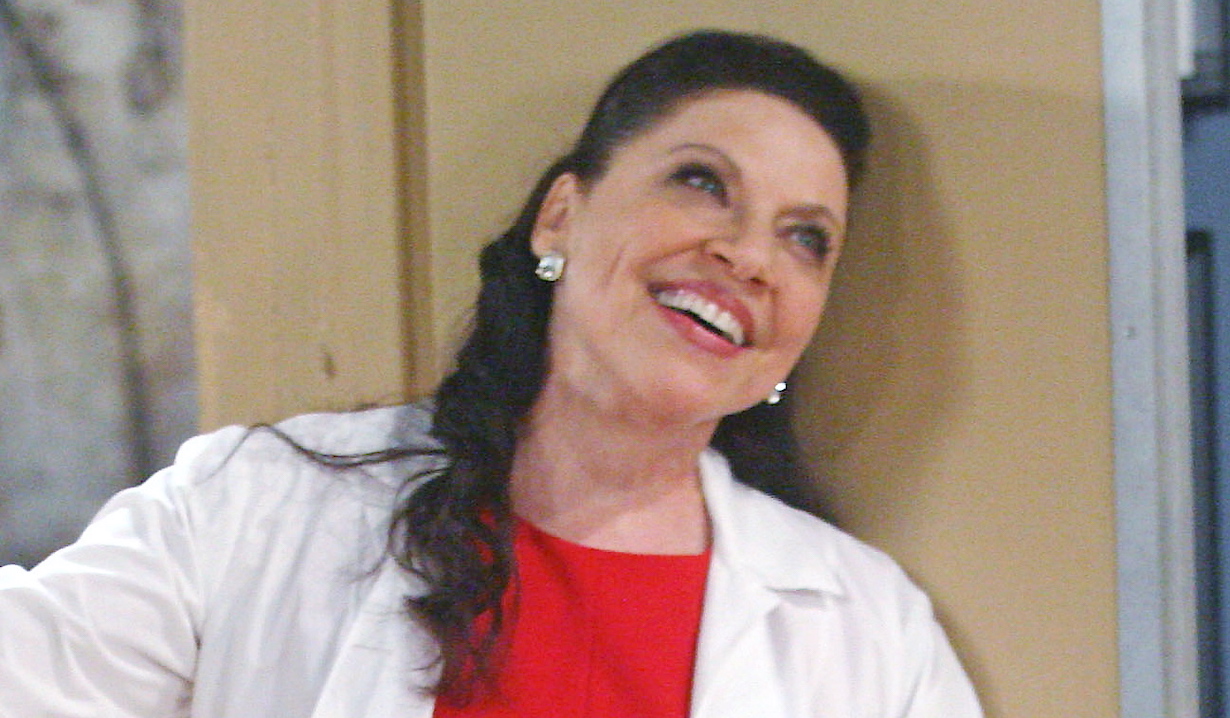 “There was no humanity in the beginning.”

After shooting two episodes as Dr. Liesl Obrecht on General Hospital in 2012, Kathleen Gati went on her merry way working on other shows and thinking her time in Port Charles was done. Little did she know that it was only the beginning of a decade-long-and-counting run on the soap. Gati is now proudly celebrating the 10 year anniversary of her on-screen debut, which aired August 24, 2012.

While she was working on The CW’s Arrow in Vancouver, she got the call letting her know that Obrecht was not only being brought back, but given an expanded role on the canvas. That return might not have happened if it hadn’t been for Anthony Geary (ex-Luke), who sang her praises to executive producer Frank Valentini. Gati believes that the immediate bond she and Geary shared helped seal the deal which lead to her becoming far more than was originally intended. “Frank was just awesome and [then headwriter] Ron Carlivati wrote this character, and they kept developing and developing her,” she gushes. The result? “It’s a really satisfying role.”

More: General Hospital’s couples — who’s getting together and falling apart?

Over time, the character has gone through several drastic changes, not the least of which was her developing beyond a caricature.  “There was no humanity in the beginning,” Gati admits. “I didn’t see it, I didn’t find it, it wasn’t written, and that wasn’t my job. I was there to do some evil and dark things.”

Over time, the writers discovered the character’s gentler side, which came in part as her daughter, Britt, and son, Nathan, were introduced. “The humanity in Obrecht came with the family, because there were the children and her realization that she had messed up,” Gati reflects. “You confront history, your past, and your truth, and you go… ‘I made many mistakes.’ Not that she sits into those mistakes too long. The comedy that I’m allowed to do, and the humor, the music, and the dance —  that has softened the edges of her.”

Over the years, the fan reaction has morphed, too. “When you’re evil and dark, I got a lot of hate — which is expected —  but then people were really loving it,” Gati recalls, adding that it helped that viewers were able to realize  that “there was always a reason behind” Obrecht’s darkness — well, most of it. “There’s been a few gratuitous kidnappings, poisonings, and killing… but the fans have been supportive of the whole thing,” she laughs. “So when the fans go, ‘We hate you, but now we love to hate you… ‘ That really means a lot.”

For more of our exclusive chat with the charming, bubbly actress, check out the video above. Then check out the photo gallery below to remember exactly why we love to hate Dr. Obrecht so darn much!

<p>Given that we first met Kathleen Gati’s Dr. Liesl Obrecht when she was holding hostage Robin Scorpio — you know, one of the most popular heroines in <em>General Hospital </em>history — it’s not surprising that viewers weren’t initially fond of the baddie! </p>

<p>With Luke Spencer posing as an M.D., Anna Devane’s search for her missing daughter eventually led her to Obrecht… thus beginning a decades-long relationship between the women that could only be called “complicated at best.” (It’s worth noting that legend has it Luke’s portrayer, Anthony Geary, is the one who convinced the show that Gati was a keeper and the powers that be needed to bring her alter ego back for more!) </p>

<p>It was oddly appropriate that Liesl only had eyes for the equally wicked Cesar Faison. Unfortunately, while he was perfectly happy to use her both personally and professionally, the true object of his <span style="text-decoration: line-through">affection</span> obsession was Anna. </p>

<p>OK, fine, “master” might be a bit of an overstatement, but Obrecht <em>has </em>had to sneak around incognito on more than a few occasions. From the look on Holly Sutton’s face, this particular get-up worked… at least until Liesl took the glasses off. </p>

<p>In 2013, it was revealed that Dr. Britt Westbourne was, in fact, the spawn of Obrecht and Faison. With the help of her mom, Britt schemed to win the affections of Dr. Patrick Drake by claiming to be pregnant with his baby. </p>

<p>Much to Nathan West’s surprise, the answer to that question, when posed to Obrecht, was yes. The ill-fated good guy only found out as an adult that Liesl had, upon his birth, handed him over to her sister.  </p>

<p>Despite not being quite so open with her mustache-twirling, Madeline Reeves was every bit as evil as sis Liesl. Need proof? She put daughter Nina Reeves into a coma almost a quarter of a century, framed son-in-law Silas Clay for the crime and eventually killed him. </p>

<p>It’s probably not surprising that Liesl has always been close to niece Nina (originally Michelle Stafford, <em>Young & Restless</em>’ Phyllis). Not only was Nina protective of adopted brother Nathan, but for a time, she was nearly as dangerous as Obrecht, going so far as to literally rip a baby out of rival Ava Jerome’s womb! </p>

<p>Faison was not the only man in Obrecht’s life. And while Victor Cassadine (then Thaao Penghlis, aka <em>Days of Our Lives</em>’ Tony) was smart, rich and every bit as twisted as Liesl, the one thing he wasn’t — and could never be — was Faison.  </p>

<p>Perhaps Obrecht finally realized she was barking up the wrong romantic tree when Faison suggested that he would make love to her… if she wore a mask which made her look like Anna. #StayClassyDude</p>

<p>Victor did manage to give Obrecht one heck of a gift when he arranged for her to become the hospital’s chief of staff! This despite having kidnapped, poisoned, manipulated and/or otherwise tormented most of the facility’s employees.</p>

<p>Rightly convinced that Faison’s son, Peter August, had framed her for his crimes, Obrecht held him hostage for weeks, hoping he’d confess his sins. For the record, much of the audience was, by this point, encouraging her to do away with the guy! </p>

<p>With each of them trying to put dark pasts (mostly) behind them, it wasn’t surprising that Obrecht and Franco Baldwin bonded after she hired the ex-serial killer to work as an art therapist at the hospital. Like his eventual wife Elizabeth Webber, Obrecht was devastated when he became yet another of Peter’s victims. </p>

<p>Then again, Obrecht has always had a flair for the dramatic and a desire to be in the spotlight. How often has she taken to the stage at the Nurses Ball… whether at the request of hostess Lucy Coe or by literally stealing the show? </p>

<p>And who could forget the time that Obrecht, er, entertained the children at General Hospital’s annual holiday party… by telling them the story of Krampus, a creature who terrorizes youngsters who have misbehaved! </p>

<p>Despite the look on Britt’s face, we’re pretty sure even she approves of her mom’s budding relationship with Scott Baldwin. For one thing, given how many scrapes the women get into, having a lawyer on hand can’t be a bad idea, right? </p> 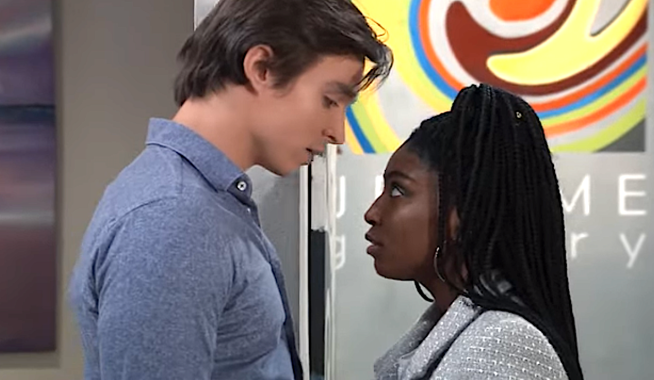 With a Single Line of Dialogue, General Hospital Ups the Ante on 'Sprina' and Their Future — Big Time 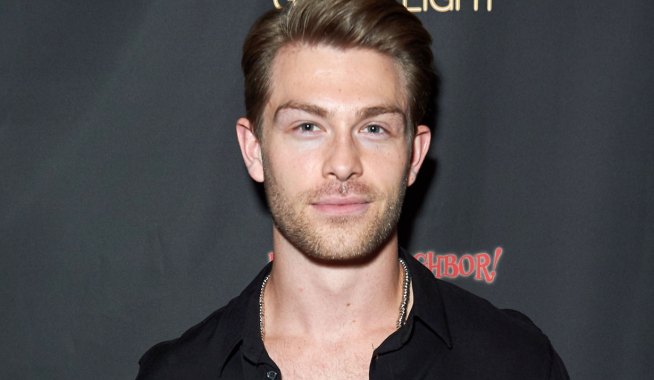