Watch General Hospital’s Kirsten Storms and Days of Our Lives’ Brandon Barash Take Daughter Harper Back-to-School Shopping: ‘When She Walked Up With a Taco Piñata, I Nearly Lost It’ 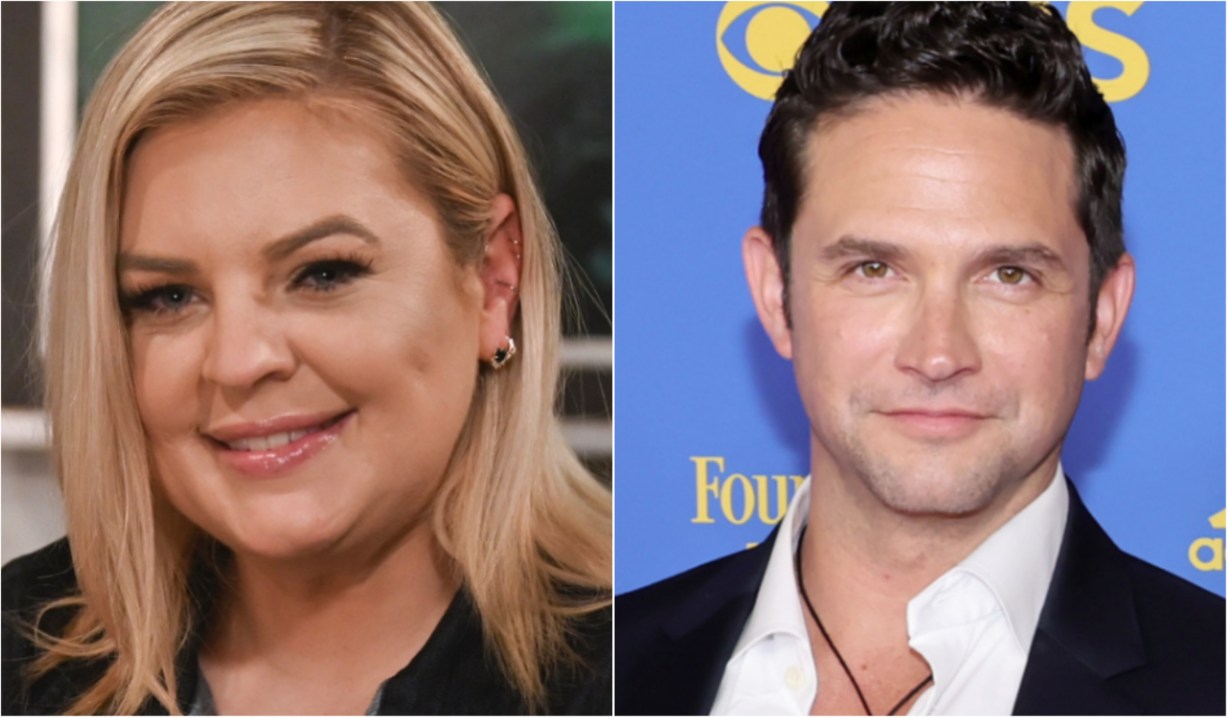 The lettuce spinner, dog toys and various other items weren’t on their list.

It’s that time of year again, time to get the kids ready for school, which includes new clothes and classroom supplies. Over the weekend, co-parents General Hospital’s Kirsten Storms (Maxie) and Days of Our Lives’ Brandon Barash (Stefan), along with his fiancée Isabella, took their daughter Harper back-to-school shopping… “Um…sort of,” Storms stated.

The actress posted a video of their trip to Target after spending “the last week and a half under the weather,” though she noted it wasn’t due to Covid. With Storms finally starting to feel like herself again, and after waiting “until the last minute,” she documented their successful trip to the store.

“It seemed like everything made it into our cart along with Harper’s new crayons,” she shared.

While Storms pushed a cart filled to the top, the camera panned on Barash and Isabella standing in a household aisle, to which Storms explained, “Every time Isabella told Brandon that they needed something for their house — example: a lettuce spinner — I agreed with her. Because that’s how we roll.” Barash gave another “no” to Isabella then Harper stopped to squeeze some dog toys until something else caught her eye…

“It’s clear Harper loves this store,” Storm observed. “When she walked up with a taco piñata I nearly lost it.”

But again, Barash told his daughter, “No.”

Talk about having some fun — and it looked as though Harper and Isabella had the best time out of everyone!

And if you know someone who plans to start watching the ABC soap when their little ones head off to school direct them to our photo gallery below for a crash course: General Hospital 101, a beginners guide to Port Charles.

<p><em>General Hospital</em> largely revolves around <span style="text-decoration: line-through">fearsome mobster</span> mild-mannered coffee importer Sonny Corinthos, who at this point has fathered half of Port Charles. Maybe more than half. We suck at math.</p>

<p>Sonny’s current <span style="text-decoration: line-through">moll</span> girlfriend is <em>Crimson</em> magazine publisher Nina Reeves, with whom he struck up a relationship while she kept secret for months the fact that he wasn’t dead, just chilling in Nixon Falls with amnesia.</p>

<p>Sonny only decided to make a real go of it with Nina when mercurial missus Carly Corinthos elected to put a stop to their marriage over his lingering feelings for “the other woman.”</p>

<p>… Carly has Aurora Media bigwig Drew Cain, the twin brother of her late BFF/sorta husband Jason Morgan. Considering that this is how Drew looks in handcuffs with a boo-boo, we doubt that the friend zone is where he’ll stay.</p>

<p>ELQ exec Michael Corinthos is actually the result of Carly’s one-night stand with the late A.J. Quartermaine. But Sonny sorta took possession of the boy, who now loathes “Dad” for choosing Nina over their family.</p>

<p>What only Carly knows so far (and isn’t inclined to reveal!) is that Michael’s pregnant-and-ailing significant other, schoolteacher Willow Tait, is the long-lost daughter of — awkward! — Nina. Explosions in three, two…</p>

<p>New to Sonny’s organization is Dex Heller, who the boss has no idea is, in fact, a spy sent by Michael to undermine his pop. Apparently, the hottie has not been clued in to Sonny’s feelings about betrayal.</p>

<p>Sonny’s confidant, Brando Corbin, might have figured out by now that Dex isn’t on the level, had he not been distracted by model-wife Sasha Gilmore’s pill-popping in the wake of their son’s tragic death.</p>

<p>To mom Carly and stepdad Sonny and pretty much <em>everyone’s</em> horror, the first time that Josslyn Jacks made love with boyfriend Cameron Webber, a video was shot — unbeknownst to the teens — and uploaded to the Internet.</p>

<p>Joss’ gal pal, Trina Robinson, was accused of the crime. But as if the halo around her head didn’t make it clear enough, she was beyond innocent. The actual guilty party was…</p>

<p>Esme Prince was the amateur “filmmaker” who turned Joss and Cam into reluctant viral sensations and framed Trina for her misdeed. But if she’s super mega twisted, you can probably blame it on…</p>

<p>Before plummeting off the parapet at Wyndemere, Esme was being manipulated by Ryan Chamberlain, a card-carrying psycho serial killer obsessed with Port Charles’ foremost…</p>

<p>Ava Jerome thought that she’d found something that made her as happy as martinis in her marriage to prince Nikolas Cassadine. Then he went and screwed it all up by sleeping with Esme.</p>

<p>Maybe Nikolas is destined to blow every chance he gets. He is, after all, the especially chiseled product of mom Laura Collins’ time as the prisoner of his maniacal father, Stavros Cassadine.</p>

<p>Um, she is. Years after her legendary marriage to Luke Spencer ended, Laura is living large and in charge as the mayor of Port Charles. She even has a new husband by her side. Unfortunately…</p>

<p>Mainly because, as you can see, Port Charles’ shrink about town, Kevin Collins, is an exact replica of twin brother, Ryan. Except in the category of homicidal tendencies, thankfully.</p>

<p>Nikolas’ son with Sonny’s late half sister, Courtney, worked as tirelelessly as sneakily to expose “girlfriend” Esme’s crime and exonerate Trina. He took so long, though, that the young woman he truly loved found herself in a most appealing…</p>

<p>Rookie cop Rory Cabrera took one look at Trina and was not only convinced that she was innocent, he was convinced that he’d met the girl of his dreams. See that gaze? The boy is <em>smitten</em>!</p>

<p>Curtis Ashford went from private eye to private parties — as the owner of hot spot The Savoy. He still loves a good mystery, though. What’s the recipe for those tasty cocktails that he serves? Only he knows!</p>

<p>Here, Curtis’ auntie, Stella Henry, demonstrates the look that you never want to see cross her face. It is by and large an indication that you have done or are about to do something of which the social worker disapproves.</p>

<p>Curtis’ dad, Marshall Ashford — long thought to be dead (take a number!) — is certain that Nurse Epiphany Johnson is good for the heartsickness that ails him.</p>

<p>Jordan Ashford is charged with keeping law and order in Port Charles, a town where they’ve practically erected a statue to <span style="text-decoration: line-through">racketeer</span> coffee importer Sonny. We would <em>not</em> want her job. Her cheekbones, yes. Her job… no.</p>

<p>These days, if Sam wants to catch up with Kristina, all she has to do is swing by Charlie’s Bar. Not just for a drink, but because owner Phyllis Caulfield recently named the young woman manager. </p>

<p>Back to Alexis for a second… Despite her predilection for mobsters, she’s currently embroiled in a flirtation with Gregory Chase, the ex of journalist Jackie Templeton and the father of…</p>

<p>Because this is the cutest picture of all time. But beyond that, this is Gregory’s older son, Hamilton Finn, a doctor at General Hospital and the father of adorable Violet (with the MIA Hayden Barnes).</p>

<p>Finn is enamored of Cam’s mother, Nurse Elizabeth Webber, who since the death of husband Franco Baldwin and their “killing” of his murderer, Peter August, has been a little unstable. As in, she occasionally hugs her attire. See?</p>

<p>Finn’s kid brother, easy-on-the-eyes Harrison Chase, is one of Port Charles’ finest. As in, he’s a detective with the PCPD… at least when not suspended for one reason or another. He’s also drawn to drama. Which explains why he’s made a VIP in his life the one and only…</p>

<p>Ned, by the way, has formed a whole new family with Sonny’s babymama, Olivia Falconeri, and her son by the late Julian Jerome, lil’ Leo, who has autism. And also, it would appear, a keen willingness to hold one’s gaze.</p>

<p>For some reason, Ned, Olivia and a whole bunch of others live at the Quartermaine mansion, which Alan’s widow, fellow doctor Monica, will be quick to remind anyone within earshot is hers, damn it!</p>

<p>No one has noticed that new Quartermaine on the block Austin Gatlin-Holt looks exactly like Liz’s last husband. Fashionista Maxie Jones is just glad that he isn’t as obviously evil as her last boyfriend, Peter August. That said, Austin and Franco could have been…</p>

<p>This <span style="text-decoration: line-through">is</span> was Franco. But let’s be real — it could just as well be and/or have been Austin. The same as Finn could pass for John McBain or Silas Clay… We just don’t talk about that stuff, and you shouldn’t, either.</p>

<p>Among the first to smell a rat whenever Maxie’s late almost-husband entered the room was her former non-husband, Damian Spinelli. Kindly don’t call him geeky. He is, if anything, geektastic. Thank you.</p>

<p>Ever since he parachuted into the pool at the Metro Court, Dante’s old pal, Cody Bell, has been turning heads. Alas, smokin’ as he is, sometimes he’s been turning them… away. Meanwhile, he was recently revealed to be the son of Dominique Stanton, the late love of Scotty Baldwin (whom we’ll meet in a moment). </p>

<p>Reformed Dr. Feel-Bad Britt Westbourne has thus far remained immune to Cody’s charms. But with limited options and his unlimited appeal… c’mon, you do the math. Mainly because, as previously admitted, we’re terrible at it.</p>

<p>Britt’s longtime wingman is Brad Cooper — not Bradley, <em>Brad</em>. A former conniver, he, too, is now walking the straight and narrow after losing both his husband and his freedom by pretending Michael’s son was really his late, adopted one.</p>

<p>Brad’s aunt, Mafia queenpin Selina Wu, would love nothing more than to involve him in the “family business.” OK, she might love to take over Sonny’s turf more, but that’s another matter altogether.</p>

<p>Terry Randolph, Britt’s co-chief of staff at the hospital, is looking for love. It’s a bit trickier for her than most, however, as she’s an out and proud transgender woman in a world that isn’t always, or even often, welcoming.</p>

<p>Once upon a time, Britt’s mother, Dr. Liesl Obrecht, was the obsessive acolyte of supervillain babydaddy Cesar Faison. Nowadays, she’s — gasp — kinda… nice?!? And she’s head over heels in love, as anyone would be, with…</p>

<p>He’s been naughty. He’s been nice. But one thing that smarter-than-the-average-bear attorney Scotty Baldwin has never been is boring. One doesn’t achieve iconic status by being meh.</p>

<p>Lucy Coe hung up her devil’s horns ages ago. Now the question is, can she convince besotted barrister Martin Gray — who just happens to be Laura’s surprise half brother — to do the same so that the only Deception in their relationship is her company?</p>

<p>Back when Sonny was living in Nixon Falls as amnesiac Mike, he became close with Phyllis, who eventually relocated to Port Charles and took over Charlie’s Pub, the bar previously run by the mafioso’s late nemesis, Julian Jerome.</p>

<p>After years of miscommunication and animosity, onetime WSB operative and eternal badass Anna Devane surrendered to passion and struck up a romance with her longtime admirer…</p>

<p>Valentin Cassadine is handsome, charming, rich, powerful… and so complicated that Rubik’s Cubes look at him and go, “[Bleep], we should’ve been more like that.” Making matters even more difficult for him and Anna is that he’s had to…</p>

<p>At least we can always count on Maxie’s mom and stepdad, Felicia and Mac Scorpio, to be the embodiment of love and marriage… that’s always on the verge of disaster, thanks to their proximity to any number of baddies.</p>

<p><em>Law & Order</em>’s Jack McCoy has nothing on Robert Scorpio, the former WSB spy who’s become the district attorney of Port Charles… um, when we weren’t looking. But whatevs!</p>