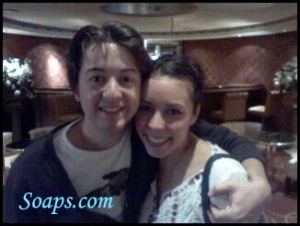 The opportunity for fans to spend four days with 19 soap stars is just over a month away, as the 2010 Soap Cruise will set sail from Miami on January 28.

I recently talked with General Hospital‘s Bradford Anderson about the event and of course got the scoop on what’s going on with his alter ego Spinelli.

Recalling his first Soap Cruise experience from the 2009 voyage, Bradford shared, “I had no idea what to expect, but I was pleasantly surprised in every arena. I was really impressed with the boat; Celebrity Cruises does a really nice job. I liked how the whole event was structured. We got a lot of great time to hang out with our viewers and there was no lack of interaction, but we’re not all just sitting around going, ‘What should we do next?’ It’s well structured in terms of fun events, but also, we all have enough time to enjoy being on a cruise and being with our friends or family, whoever you bring, so it’s a nice mix of interaction, you know, soap related interaction, and a good mix of also, ‘Hey we’re on a cruise. Let’s enjoy it for what it is.'”

The cruise allows the fans to have access to their favorite Daytime stars for four days straight, but being that accessible isn’t a problem for Bradford, as he put it into perspective recalling last year’s experience. “Everyone was really respectful, because not only are they there to see us, but for most of them, this is also their vacation. If you’re on a boat with a casino and pools and you’re in Key West and Cozumel, I mean I am not the most exciting thing that’s available to those people. I would like to think I add to the experience, but I think there are other things that could be enjoyed more than me.”

The many activities planned on the cruise ship include Q&As, Dancing with the Stars, karaoke, and cocktail parties, which Anderson mused he would be taking part in. “I’m pretty fair game for most things, so whatever they have in store for us, I’m not one to really shy away from much. I imagine I will be pretty involved in most, if not all, activities.”

Since his fiancée Kiera, who he is marrying April 10, is unable to go with Bradford this year, the actor will be bringing a high school friend who lives on the East Coast and who he doesn’t get to spend a lot of time with. He also indicated he might be found in the ship’s casino from time to time. “I really do like to gamble. I’m not a high stakes gambler by any means. I don’t get thrilled by the prospect of losing money, but I like the games. I learned how to play dice recently and I really enjoy that game. It’s fun.”

Aside from his buddy, Bradford anticipates hanging out with his fellow soap stars. “I haven’t looked at the list for this year, but I assume Christian LeBlanc (Michael, The Young and the Restless) is on it and Winsor Harmon (Thorne, The Bold and the Beautiful) and those guys who I was on it with last year. I look forward to seeing especially the CBS people because I don’t know them very well. I know a few of them because of these events I’ve been doing, but I get to spend more time with the ABC people and I’m excited to see any and all ABC friends, but it’s fun to meet other people in the community that I don’t run into on a regular basis.”

As for his character on General Hospital, Spinelli has hit a rough patch with Maxie (Kirsten Storms), after he learned she cheated on him with the mysterious Franco (James Franco).

When asked if Spinelli would be able to forgive her, Bradford speculated, “I think he wants to figure out the real reason for why it happened and he wants her to be able to speak in those terms and not just cover it up with things that don’t matter. He’s a pretty forgiving fellow and just wants to understand why it happened and if it’s going to happen again. I think this time around, at least the way I wanted to approach it was less, you know, Spinelli the doof, but more Spinelli the well-formed human being that deals with things in a real way.”

He continued, "In years past when things went wrong with women it was kind of like, 'Of course they hate me.' I want him to be a little more responsible with his own emotions and to just hold her accountable rather than making it like, 'Of course she'll cheat on me.' I just didn't want him to be the doof again because we've done that before. The great thing about Spinelli is most things he experiences are new to him and I like to keep that going and have him deal with this in a new way too."

As regular viewers know, Maxie suggested Spinelli cheat on her with anyone of his choice in order for him to even the score. Something Spinelli is trying to understand and move past.

"Well, that's to be expected, but still disappointing," Bradford said in regards to Maxie's big idea. "He's trying to give her the benefit of the doubt by actually thinking about it and asking people, 'Is this what real people do? Is this a viable solution?' So I think his instincts tell him, 'No. Of course that isn't and that's not something I'd be interested in, but is that what people do? No. Okay, right. I am thinking clearly. Then what is this? Why are you asking me to do this? Why is this the solution? It's just to make you feel better. Wait a second - No. You can't cheat on me and then decide how I react. That's not fair.' So I think, again, he's going to contemplate not the actual specifics of the idea, like, 'Ooh, what would it be like to have sex with someone else?' No, it's going to be like, 'Okay she presented this as the way to get by it. Is that the way to get by it? No.' He'll give the thought contemplation simply for her sake, but I think he'll follow his instincts and say, 'Okay this is not the healthy way to deal with it. So let's get beyond this part and figure out what we actually need to do."

Of course when Spinelli found out it was Franco Maxie cheated on him with, he went to confront his competition. That didn't exactly go well, as Franco gave him a creepy message to deliver to Jason (Steve Burton), but Bradford's experience with actor James Franco was a little different.

"It was great. He was incredibly well prepared and the consummate professional. And good humored too. I mean he was on set three days and filmed something like 15 to 20 episodes. He had a workload, you know some days we have very heavy workloads but none of us have had a workload like that. So not only to be able to get through it efficiently, but also to keep a smile on his face the whole time? That was very admirable," he marveled. "It was really fun and he's a presence. I think I've always been very lucky on our show to deal with people who are nothing if not a presence. You know the scenes Spinelli had with Sonny (Maurice Benard) – it's pretty easy to have natural reactions to good actors so I would say that is the same situation I had with James."

Don't expect more scenes between the two though, as Bradford joked, "I don't think Spinelli would come knocking on his door again."

While Spinelli and Maxie work on patching up their relationship, viewers shouldn't expect a quick resolution, as Bradford previewed, "We're not going to neatly tie up the cheating storyline. That's going to be something we're going to talk about and the Franco stuff just keeps going on, not just with our situation but there's more work to tie those up so we will be involved in the Sonny and Jason storylines as well as our own."

Stay tuned to General Hospital to find out what happens with Maxie and Spinelli and if you go on the Soap Cruise, be sure to let Soaps.com know all about your experience.

For more information on the cruise visit Soap Cruise 2010: The Third Voyage.