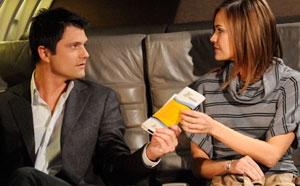 As previously reported in our Comings & Goings section, Chad Brannon is returning to
General Hospital on December 22.

The actor will be back for one episode, but won’t appear as Zander Smith, Emily’s former love who he played from 2000 – 2004.

Instead, according to Entertainment Weekly, Brannon will play an airplane passenger who sits next to and talks with Rebecca as she leaves Port Charles.

Are you looking forward to seeing Chad back on General Hospital? Share your thoughts with Soaps.com below, and feel free to take a look at what Chad’s been up to over the years in GH Actors: Where Are They Now?

‘The Great Gatsby’ Series In The Works From Michael Hirst