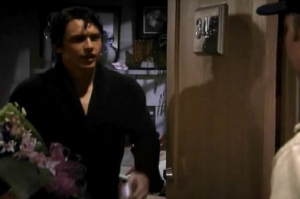 James Franco is interviewed on his roles as Franco, on GH.

Updated January 21, 2010: James Franco turned to New York Magazine once again to further discuss his decision to appear on “GH.”

In his latest explanation, James said the idea of doing a soap came to him while filming his second movie with the artist Carter called “Maladies.” In it, James plays a former soap star, but doing “GH.” wasn’t research as he said, “Now, just because I’m playing a character who was formerly on a soap opera doesn’t mean I had to go on a soap opera, right? So going on “General Hospital” isn’t directly related to Maladies. But we got to talking, like, ‘Hey, what if I really did a soap opera? That would be kind of amazing!'”

He further detailed his initial meeting with “GH.” as he recalled, “I said, ‘I want to play an artist, and I want him to be crazy.’ And they wrote this character that was better than I could have ever asked for. It was their idea to call the character Franco. I said, ‘That’s crazy. Thank you.'”

After experiencing the grueling pace of Daytime, he used the skills utilized to land a role in the Danny Boyle movie, “127 Hours.” When he was asked to memorize an audition speech on short notice he had no problem. “Because I had just done “General Hospital,” where I was doing 77 pages a day, I can memorize like that,” he said snapping his fingers. “I have to give credit to “General Hospital” for being able to memorize like that, and I got the part!”

According to an online report by New York Magazine, James Franco is planning his post-“GH” art exhibit for the spring.

His gallery show will be held at New York’s Deitch Projects and will be shot for a ‘special episode’ of “GH,” which he will co-direct. As he explained, the exhibit will relate to what he’s already done on the soap.

Per the gallery, nothing has been finalized as of yet.

In an online article for the Wall Street Journal written by James Franco (Franco), the actor opens up about why he chose to take on the world of soap operas.

Referring to his decade long obsession with performance art, Franco says, "I finally took the plunge and experimented with the form myself when I signed on to appear on 20 episodes of "General Hospital" as the bad-boy artist "Franco, just Franco." I disrupted the audience's suspension of disbelief, because no matter how far I got into the character, I was going to be perceived as something that doesn't belong to the incredibly stylized world of soap operas. Everyone watching would see an actor they recognized, a real person in a made-up world. In performance art, the outcome is uncertain—and this was no exception. My hope was for people to ask themselves if soap operas are really that far from entertainment that is considered critically legitimate. Whether they did was out of my hands."

He continues on, detailing the history of performance art and then wraps his article up by previewing where his stint on General Hospital will lead. "The folks at "General Hospital" informed me that in three days of filming we backlogged enough material for 23 episodes. There will be one more step. After all of the Franco episodes are aired, my character's storyline will be advanced in a special episode filmed in a "legitimate" New York gallery. One more layer will be added to this already layer-heavy experiment. If all goes according to plan, it will definitely be weird. But is it art?"

What do you think of James Franco's take on his role on General Hospital? Are you interested to see his finished piece of performance art? Share your thoughts with Soaps.com below.