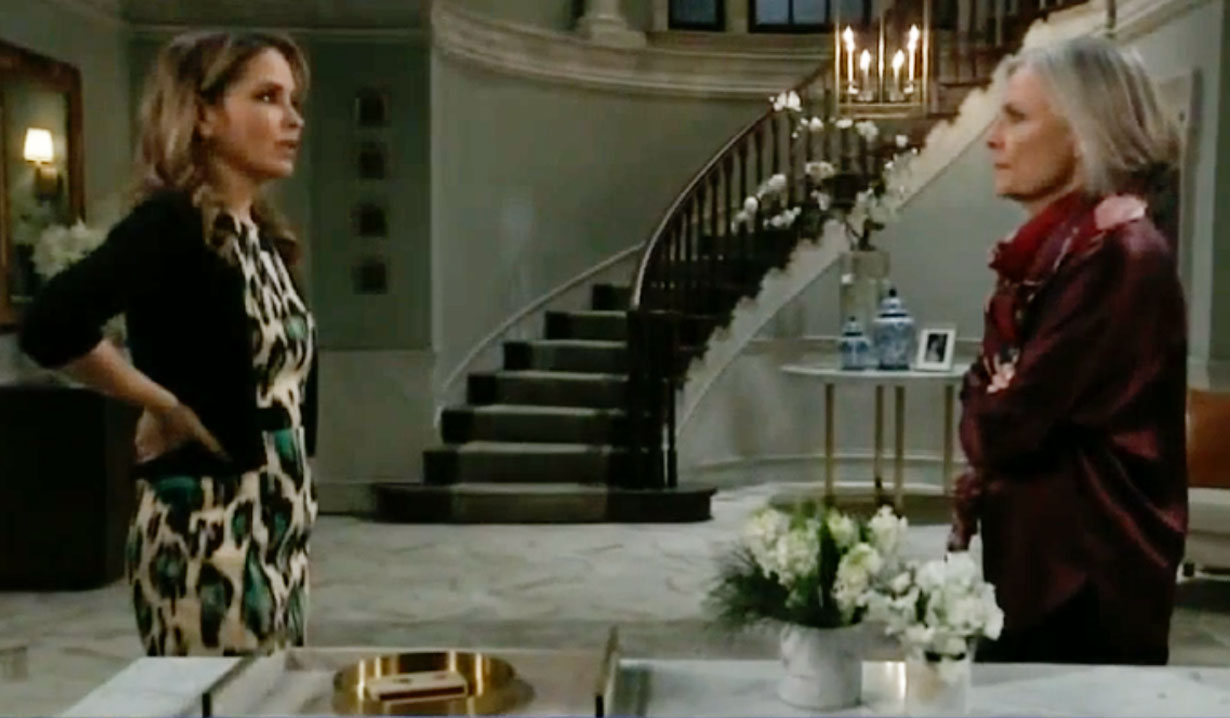 Things are reaching the boiling point and are bound to explode.

In the preview for General Hospital for the week of January 18 – 22, Jax warns the truth is going to come out as it’s inevitable. Recently Nina had decided to give up looking for her daughter, but a talk with Ava made her reconsider, and she began wearing her half-heart locket again. At the same time, Ava was able to convince Joss to give her the other half of the locket that Avery had found. Carly had taken it to be repaired but in actuality, she took it because she realized it was a key to proving Nina was Nelle’s daughter.

After some tips on how to be a spy from Robert, Olivia managed to trip Tracy up and catch her in a lie proving her version of what happened the night of Alexis’ so-called accident was a lie. Look for Olivia to confront Ned about what really happened between him and his ex-wife. Will Ned finally come clean about his one-night drunken stand with Alexis and hope Olivia forgives him?

And Liz is stunned when she learns Franco asked Jason to kill him if he were to revert to his old serial killer ways.

Read our General Hospital spoilers to learn who Olivia turns to for help. Then take a look through our gallery of One Life to Live through the years and be sure to get your free daily soap-opera fix for General Hospital — and all of the other daytime dramas — delivered straight to your email inbox by signing up for Soaps.com’s newsletter.

Image: Courtesy of the Everett Collection
1/31

<p>When ABC premiered Agnes Nixon’s <em>One Life to Live</em> in 1968, its central heroine Victoria Lord was played by none other than Gillian Spencer (later Daisy Cortlandt on <em>All My Children</em>). Also hanging out in those early days on what looked like a <em>Gilligan’s Island</em> jungle set were Lillian Hayman as Sadie Gray, Justin McDonough as D.A. Bill Kimbrough, Jan Chasmar as little orphan Amy (not her official name, but let’s be real), Antony Ponzini as Vince Wolek, Lynn Benesch as Viki’s sister Meredith and Michael Storm as Dr. Larry Wolek.</p>

Image: ABC/Courtesy of the Everett Collection
2/31

<p>Yep, in the beginning, <em>One Life to Live</em> allowed characters to be shown — <em>gasp</em> — doing the dishes. Seen here in 1971 are Ponzini as Vinny, who fell for good-time gal Niki Smith, unaware that she was Viki’s alternate personality, and Amy Levitt as Cathy Craig, the <em>Banner</em> reporter who carried on with not one but two of Viki’s love interests!</p>

Image: ABC/Courtesy of the Everett Collection (2)
3/31

<p>In 1971, future six-time Emmy winner Erika Slezak became the third actress to take on the roles of Viki and her wiggy alter, Niki. “My first day,” she told the <a href="https://www.youtube.com/watch?v=CpTyuvaG25o" target="_blank">Archive of American Television</a>, “was a little weird.” Not only did none of her castmates know that a recast was taking place until she showed up, “I had never been on television. I didn’t know anything… I didn’t know where the bathroom was!” Nonetheless, she soon distinguished herself as the rookie of the year.</p>

Image: ABC/Courtesy of the Everett Collection
4/31

<p>When <em>Dark Shadows</em> vet Jim Storm (later Bill Spencer Sr. on <em>The Bold and the Beautiful</em>) decided to scrub out as doc Larry after only a year, he knew just the actor to recommend to replace him: his own brother, Michael, who made the rounds in Llanview in one capacity or another for the next 35 (!) years.</p>

Image: ABC/Courtesy of the Everett Collection
5/31

<p>Legend has it that Nixon created for Ellen Holly the pivotal role of Carla Gray, who viewers wouldn’t learn until later was a light-skinned African-American passing for a white woman. Nixon also created for Holly quite a stir. The late-1960s being a less enlightened time, the audience was scandalized by Carla’s romance with a Black doctor. Only years later, after the truth about her ethnicity had come out, did she fall for her true love, Llanview PD lieutenant Ed Hall (Al Freeman Jr., not only the soap’s first Outstanding Lead Actor Daytime Emmy winner but the first African-American Outstanding Lead Actor Daytime Emmy winner).</p>

Image: ABC/Courtesy of the Everett Collection
6/31

<p>Arguably — and we know that you <em>will</em> argue — the love of the life of upwardly-mobile Dorian (ultimately Robin Strasser) was her babydaddy, David Renaldi (the late, great Michael Zaslow). When the actor was stricken with Lou Gehrig’s disease and fired from his long-running role of Roger Thorpe on <em>Guiding Light</em>, <em>One Life to Live</em> rehired him and wrote his deteriorating condition into his character’s storyline.</p>

Image: ABC/Courtesy of the Everett Collection
8/31

<p>As the ABC soap sought to capitalize on the popularity of primetime’s <em>Dallas </em>and<em> Dynasty</em> in the 1980s, it thrust to the forefront not only Strasser’s Alexis Carrington stand-in, Dorian — whose shoulder pads grew along with her schemes — but J.R./Jock Ewing hybrid Asa Buchanan, played with inimitable swagger by former movie star Phil Carey.</p>

Image: ABC/Courtesy of the Everett Collection
10/31

<p>In its heyday, <em>One Life to Live</em> thrived in its study of contrasts, a la the massive differences between good guys like Woods’ Bo and Gerald Anthony’s always-scheming Marco Dane, a character so popular that he was eventually crossed over to stir the pot on <em>General Hospital.</em></p>

Image: ABC/Courtesy of the Everett Collection
11/31

<p>In 1995, Joey and Jessica Buchanan were played by future primetime megastar Nathan Fillion (currently the titular newbie on <em>The Rookie</em>) and Erin Torpey, who went <a href="https://soaps.sheknows.com/gallery/soap-stars-who-grew-up-on-screen/alfonso/" target="_blank">from cute kid to leading lady</a> before bequeathing her legacy character to a successor, whom we’ll get to; don’t you worry.</p>

<p>Bo and his ultimate true love Nora Gannon (Hillary B. Smith) had to be ready at a moment’s notice to “drink to that” — and/or attempt to drink it away. And who could blame them? Certainly not us, not considering that over the years, they dealt with as many heartaches (remember when she slept with her ex to give her husband a baby?) as joys (no less than Little Richard was the officiant at their rock-’n’-roll wedding).</p>

Image: ABC/Courtesy of the Everett Collection
13/31

<p>In the underground city of Eterna — what, your town <em>doesn’t</em> have one? — somehow bad girls Tina Lord (Andrea Evans) and Gabrielle Medina (Fiona Hutchison) were allowed to manhandle Christine Cromwell (Susan Floyd) while dad Leo (Alan Scarfe) held them at vague gunpoint. At the time, Viki believed that Christine was the daughter that she’d forgotten ever having. What, <em>you’ve</em> never forgotten… Never mind.</p>

<p>Viki’s daughter turned out to be her frequent sparring partner, <em>Fraternity Row</em> diva Megan Gordon (Jessica Tuck), who as you can see had the same reaction to iconic playboy Max Holden (James DePaiva) that most of the female population of Llanview did at one point or another. Often <em>more</em> than one point.</p>

<p>Though lupus ultimately cut short Megan’s life, at least she got to slip away in the arms of her true love, Jake Harrison (Joe Lando). And, perhaps owing to her background as a lead on Bo’s soap opera, even after her passing, she kept showing up as an angel to visit her nearest and dearest. Wings and harp not included.</p>

Image: ABC/Courtesy of the Everett Collection
17/31

<p>Long before Judith Light learned how to pose without giving herself a double chin — see exhibit A — the Daytime Emmy winner stunned soap audiences with her revelation that yes! Fine! Doctor’s wife Karen Wolek had <a href="https://www.youtube.com/watch?v=0eCIAe4hLeU">turned tricks to pass the time.</a> Needless to say, the powerhouse has gone on to make a hell of a name for herself on stage and in primetime.</p>

Image: ABC/Courtesy of the Everett Collection
18/31

<p>We dunno how, but it worked: The audience bought wholeheartedly into the romance of kooky spiritualist Luna Moody (Susan Batten) and DePaiva’s soulless Casanova Max.</p>

<p>Since scheme queen Tina was and always would be endgame for gullible Cord, it wasn’t exactly a jaw-dropper when he briefly found himself drawn into the tangled web woven by Dorian’s manipulative niece, Blair Daimler (Kassie Wesley, who of course in real life married James DePaiva). What <em>was</em> surprising was that, once he was in her clutches, he managed to find his way back out.</p>

<p>When Billy Douglas (future movie star Ryan Phillippe) confessed that he was gay, Reverend Andrew Carpenter (Wortham Krimmer) reached out to the teenager to reassure him — and wound up being falsely accused of preying upon the boy by a spiteful Marty Saybrooke. More on her in 3, 2…</p>

<p>After being gang raped by Todd and his frat brothers, Marty (Susan Haskell) was understandably shattered. She didn’t know if she’d ever feel anything again except for anger and fear. But that all changed when a trip abroad brought into her life rugged poet Patrick Thornhart (Thorsten Kaye, now Ridge Forrester on <em>The Bold and the Beautiful</em>). Their chemistry was too great to be denied — or contained on screen; their portrayers also became a couple in real life.</p>

<p>Viki probably shouldn’t have looked so shocked here. By the time she learned that the notorious Todd Manning (Roger Howarth) was her half brother, she’d already discovered that Megan was her daughter and Tina was her half sister. </p>

<p>“Muy caliente” doesn’t even <em>begin</em> to describe the amount of sexy that Kamar de los Reyes and David Fumero brought to Llanview as the Vega brothers, Antonio and Cristian. Fun fact: Both actors married co-stars, the former, Sherri Saum, who played his love interest Keri Reynolds; the latter, the former Melissa Gallo, who played his cousin, Adriana Cramer.</p>

<p>It sure didn’t look like it was in this “party picture” from 2010. Based on the expressions on the faces of Gigi Morasco (Farah Fath), beau Rex Balsom (at the time, the actress’ real-life significant other, Jean-Paul Lavoisier) and Kelly Cramer (Gina Tognoni), the champagne was flat. Or worse, there was none left.</p>

<p>Once Viki was made aware of the fact that she’d had two daughters, not just one, as she’d for so long believed, twins Jessica (Bree Williamson) and Natalie (Melissa Archer) made up for lost time by squabbling over everything from who Mom loves more to who can attrack whose boyfriend-of-the-week faster.</p>

<p>The residents of Angel Square couldn’t help but contemplate a name change for their hood whenever it was paid a visit by she-devil Blair and her “better” half, Todd. In their defense, they often had Very Big Issues to deal with. For instance? Erm, the odd stretch in which Todd had to prove that he was, in fact, Todd and not… Well, keep scrolling. You know very well the character to whom we’re about to get.</p>

<p>Well, he sure had <em>us</em> <em>fooled</em>. Victor Lord Jr. (Trevor St. John) spent the better part of a decade claiming to be Todd. Even <em>he</em> believed it, thanks to the brainwashing that he received courtesy of his and his brother’s maniacal Mommie Dearest, Viki’s old “pal,” Irene Manning.</p>

<p>… there was always Roxy Balsom (daytime deity Ilene Kristen). In this instance, she was surrounded by the too-ripped-for-words Ford brothers, Nate Salinger (Lenny Platt), James (Nic Robuck) and Robert (David Gregory), who everybody just called Ford. That is, when they could still form words in his presence.</p>

Image: ABC/Courtesy of the Everett Collection
31/31

<p>At least in our minds, it does. So we like to imagine that somewhere out there, an executive with vision is wearing the same contemplative expression as Viki here as he or she maps out a way to resurrect the show as if it was just one of the many characters that have come back from the dead.</p>

General Hospital Stork Alert: Will a...