This does not feel great to suggest, but… um… is Carly Corinthos a crummy mom? Possibly the crummiest? The General Hospital hotelier loves her children; of that, there is no doubt. And if she were any more involved in their lives, they’d have to take out restraining orders against her. But is she a good mom?

In a word that’s as painful to type as it would be to speak aloud… no. Hell, no, in fact.

More: Will Drew return to break up JaSam?

When ‘I Do’ Translates to ‘I Doom’

Carly would be the first to say that there’s nothing that she wouldn’t do for her kids. Yet time and time again, she’s refused to do the one thing that they really need her to do in order to safeguard their continued existence: Leave the husband whose life of crime puts them in perpetual danger.

Carly even acknowledges that she’s made the conscious decision to allow her babies to wander around with targets on their backs. She’s not styling her hair so that it resembles wool pulled over her eyes and pretending that Sonny’s a mild-mannered coffee importer. She knows what she’s doing, and she’d doing it, anyway, risks be damned. As she told Sam on November 30, “There are good times, but there are dangers.

“Comes with the territory,” she added as if discussing the hangover that comes from a third tequila shot.

Rather than move to a territory — and spouse — that wouldn’t get her progeny placed on the endangered-species list, Carly repeatedly doubles down on her commitment to Sonny and the violence that has always surrounded him. You’ll recall that she wept and wept when son Morgan was killed in a car bomb set by Mafia donna Olivia Jerome (and intended to blow up her brother, Julian). Nonetheless, Carly had another child with Sonny and renewed her vows to him in 2019, all but baiting death to part them — or them from more of their offspring.

Now, Sonny’s latest Mob war has made collateral damage of Dev, the boy to whom the mafioso took such a shine that he manufactured a family to allow the teen to stay in the United States and moved the kid into his and Carly’s home. Her reaction to his untimely demise is perhaps best expressed by the photo below. 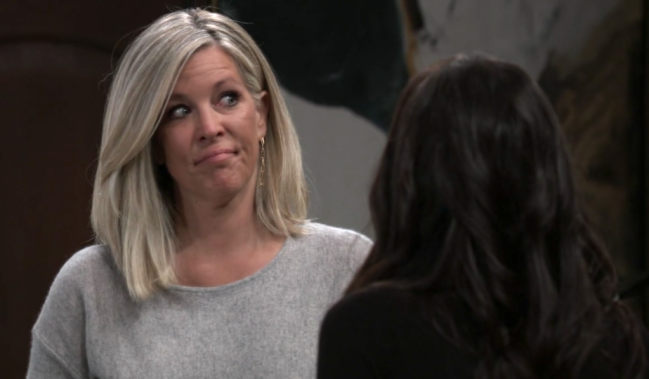 A Warped Sense of Normal

To Carly, the explosion at the Floating Rib was all but business as usual. It raised more suspicions in her mind than it stirred feelings in her heart. Not that it’s a contest, but Sam was more upset about Jason and their son Danny almost being killed than Carly was about Dev actually being killed.

To her credit, Sam also had the foresight to wonder about the impact that Danny’s near-death experience would have on him moving forward. Carly, by contrast, shrugged that daughter Josslyn’s “devastated about Dev, but lockdowns are normal for her.”

Like that’s a sensible way for a teenager, for anyone, to live.

Sam called the 60 minutes that she was unsure whether Jason and Danny were OK “the most horrific hour of my life.” Carly called them “Tuesday.” OK, not literally, but she might as well have. She wasn’t going to work herself into a tizzy about a situation that she had no intention of changing. And no, imagining that she might notice Dev’s absence this Christmas — or Morgan’s, for that matter — wasn’t going to sway her. 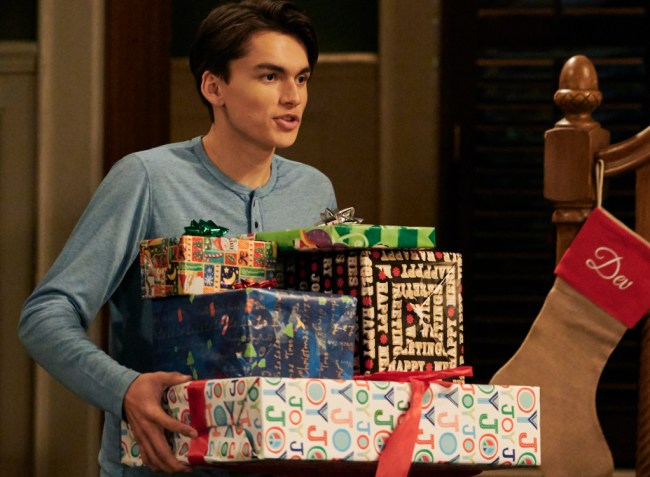 That, sadly, is why it must be concluded that Carly is one of the worst mothers, if not the worst mother, in daytime. She’d rather surround her children with guards and place them under lockdown, she’d rather play Russian roulette with their lives, than contemplate the notion that marriage to an underworld kingpin isn’t just an offer she can refuse but one that she owes it to her kids to refuse.

More: Could a Quartermaine rise from the grave?

None of this means that we find Carly any less compelling than we always have. When she blows into a room, any room, we know that fur is going fly. It’s going to be exciting — every time. But we will have to raise an eyebrow and possibly shake our heads when she goes on and on about loving her children more than anything. She’s proven that she doesn’t — she loves Sonny more and, regardless of the cost to Michael (once shot in a Mob hit gone wrong), Joss (once thisclose to being caught in crossfire) and Donna (spared… thus far), Carly apparently always will.

What do you think, General Hospital fans? Is Carly a good mother despite the firing line in which she’s chosen to permanently place her kids? On your way to the comments, stop off at the photo gallery below to review all of the other General Hospital exits that are accompanying Ashton Arbab’s as Dev.

General Hospital Holds Out Hope to...