Soaps.com Talks With Genie Francis About Her Debut Christmas CD! 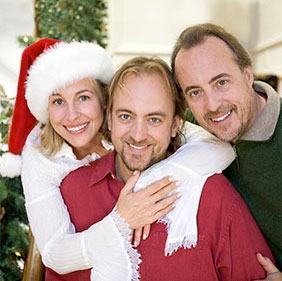 A portion of the sales from the CD, containing songs that reflect the sounds and groups the Francis siblings enjoyed while growing up, such as The Carpenters, Andy Williams and the Partridge Family, will go to the Children’s Mission in Cuernavaca, Mexico, founded by their relative, Sister Margaret Slowick.

I recently spoke with Genie about her new project, and of course, General Hospital.

Soaps.com: How did your Christmas CD come about?

Genie Francis: It was a very interesting thing. I just wanted to sing with my brothers and we all got together just for fun basically and we were singing some Beatles tunes, because my brothers both have a Beatlemania history and we harmonize well, and my younger brother said, ‘I know, let’s make a Christmas album.’ Almost right after that I heard from Sister Margaret and she had wanted to get my help with her mission for the children of Cuernavaca. She had sent me a letter after having seen the movie I did called “The Note” and she wanted to ask for my help. I had been looking for something like that, some place to do charity work so it all just kind of came together.

Soaps.com: How did you enjoy collaborating with your brothers?

Genie Francis: I loved it. It was great. It was really neat because we all got to know each other as adults in a way that we hadn’t before. We had pretty much a childhood relationship only and this kind of forged a new adult relationship for us.

Soaps.com: Have you done much singing in the past?

Genie Francis: No. I did a lot of singing as a little kid, a lot of lessons and glee clubs, and that sort of thing, but my acting thing started so early and took off and I just went with that so I never really worked on that other part of myself again. I think there was once I sang on General Hospital where I was supposed to sing a lullaby to the baby, but that’s the only time I ever sang out in the world. (laughs)

Soaps.com: Were you nervous about this then?

Genie Francis: Yeah, definitely I was nervous about it, but it was a fun thing to do. It’s a pretty secure safe place to do it in an environment where you’re with your family, and you’re in a recording situation where you can do it again if you screw up, so there was a lot of things that made it feel very safe.

Soaps.com: Do you have a favorite holiday song?

Genie Francis: I guess I’m pretty partial to “Silent Night” because I like midnight mass so much, but on this album, there’s a lot of really good ones. I think “Away in a Manger” is one of my favorites on this and “Holy Night.”

Soaps.com: Some of the proceeds of the CD’s sales are going to the Children’s Mission in Cuernavaca, Mexico.

Genie Francis: All of my proceeds are going to the Children’s Mission. All of it. Every penny, so I’m doing this philanthropically. There is no money in this for me.

Soaps.com: What can you tell us about the Children’s Mission?

Genie Francis: This is a place where some children are orphaned and some have parents that are just incredibly impoverished and they can’t afford to send their kids to school. Often the kids get sent off to work at ages as early as five and six years old instead of going to school, so what this does is, it enables the families to be able to put their kids in school.

Soaps.com: And the CD will be available on November 1?

Genie Francis: November 1 it will be available on Amazon if you want to buy the physical CD, which is kind of fun because it’s got some pictures on the inside that have never been seen before, pictures of me and my brothers growing up at Christmas time. So it’s got all these childhood pictures in there that are kind of cute. The record itself has an extremely retro feel to it so we tried to make it the kind of Christmas music we would have listened to when we were little.

Soaps.com: Will the CD only be available online or will it also be in stores?

Genie Francis: I don’t know what stores we’re going to be in just yet. Right now it’s just kind of a soft release with hopes of building it up and getting a big company behind us next year for a bigger release. Right now it’s mostly on Amazon, I’ve got some at my shop, and we have the digital download available on iTunes.

Soaps.com: Will this spur you on to do more CDs or was this a one-time thing?

Genie Francis: I don’t know. I mean, I had a lot of fun doing it, I would definitely do it again. It was a fun thing for me to do, but we’ll see how we do with this. Right now this is my charity project, everybody in my family is involved with it: my daughter sings on it, my son plays on it, my husband plays trombone.

Soaps.com: And your family’s living in Los Angeles again?

Genie Francis: We are. We’re out here. Actually we’re living in Calabasas now because it’s very close to my kids’ schools.

Soaps.com: How are you enjoying being back on the West Coast?

Genie Francis: It’s been good. I wasn’t used to how hot it was. (laughs) I’m glad that the weather’s changed now. So far I’m happy that my kids are doing well in school and everybody seems to have landed well.

Soaps.com: But your home furnishings store, The Cherished Home, is still up and running in Maine?

Soaps.com: Have you been looking for acting projects and auditioning?

Genie Francis: Yes, I’m definitely looking for work. So far, nothing on the horizon, but there’s talk of possibly making a third Note movie. I know they’re working on that, but I don’t know when it will be.

Soaps.com: I’m sure your fans would be very excited to see that, as it was quite popular.

Genie Francis: Yeah, it was. I just did a convention in Chicago and I got a lot of comments from people about “The Note.” They really like that one.

Soaps.com: I would imagine you received a lot of comments about General Hospital as well.

Genie Francis: I got a lot of comments about, ‘Are you coming back? Will you come back?’ I get that all the time. I always say the same thing: ‘I’d love to come back, but it isn’t up to me.’ (laughs)

Soaps.com: What are your thoughts on Jonathan Jackson returning to General Hospital?

Genie Francis: I’m thrilled for Jonathan and for the show. I think it’s going to be great for everybody.

Soaps.com: It seems the perfect time to bring Laura back.

Genie Francis: Yeah, I guess the possibility is there. I haven’t heard from them yet on that subject, but maybe it will.

Soaps.com: There was quite an uproar when Ethan was revealed to be Luke’s son with Holly, indicating he cheated on Laura. Many fans thought it tarnished Luke and Laura’s relationship and their legacy. Do you have any feelings on the subject?

Genie Francis: I don’t really want to comment about it. I’m not on the show, so it’s not really my business how they choose to write it. I’m not there. Clearly they’re not writing it for me.

You never know what could happen in the future, but for now, look for Genie and her brothers’ CD, “It’s Christmas Time Again” on Amazon, iTunes and in Genie's The Cherished Home beginning November 1.

Rena Sofer Talks to Soaps.com About...