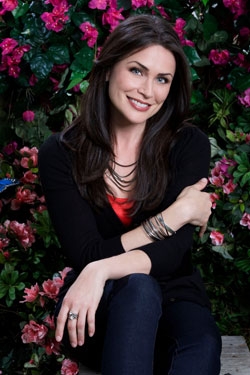 Rena Sofer is best known to soap fans as Lois Cerullo from General Hospital, who she played from 1994 – 1997. Since then she has appeared in a slew of TV series, such as “Melrose Place,” “Ed,” “Just Shoot Me!,” “24,” and “Heroes,” as well as the feature films “Traffic” and “Keeping the Faith.”

Now, Rena can be seen in the Hallmark Channel movie “Always & Forever,” about a single mom who owns her own design firm and is in a relationship, but starts to rethink some things when she runs into her old boyfriend from high school.

I recently had the pleasure of talking with Rena about her new project, which also stars Dean McDermott (“Tori & Dean: Home Sweet Hollywood”), Barbara Eden (“I Dream of Jeannie”) and Max Gail (“Barney Miller”), as well as her thoughts on playing Lois again.

Soaps.com: “Always & Forever” is a sweet love story. What about the script appealed to you?

Rena Sofer: The same thing you just said. It’s a sweet, simple, love story. We shot it at the end of last year, during like Thanksgiving, just before Christmas, and it was just uplifting; it was a nice way to end the year. It was just a very simple, sweet story and I was getting my kids ready for vacation and I didn’t want to have to get caught up with anything big and heavy and I loved the script. It was simple and that’s what I liked about it. Sometimes it’s nice to just watch a simple movie.

Soaps.com: How would you describe your character Grace?

Rena: A mature single mom who had a try at love a couple of times and it didn’t work out. You know, she put her energies and efforts into her career and her son and sometimes as they say, time goes by so quickly, especially as your kids get older, time goes by so much faster and sometimes you just wake up one day and realize, “Oh my God. I have a seventeen year old child – man – and my career is fine, but what do I have going for me?” And then all of a sudden here is this chance at kind of a questionable love, or the safe love, and which one do you go for? Do you go for what’s going to be steady and what’s going to be there, or do you go for taking a risk that might not work out, but would certainly pay off more than anything else. So I think she’s somebody who became complacent in life, somebody who accepted her life as the status quo and all of a sudden was faced with this challenge and is scared, you know?

Soaps.com: Grace runs into her high school boyfriend at their reunion. Have you gone to any of your reunions?

Rena: No, never been.

Soaps.com: Was there a reason, or you just didn’t have time?

Rena: The high school I graduated from I only went to for my senior year, so I didn’t really know anybody. Actually I ran into somebody who went to the reunion, or talked to them on Facebook or something like that and I said, “I never got an invitation.” And they said, “Oh, they couldn’t find you.” And I thought, “Well, that’s interesting. (laughs) I find that interesting. Okay.”

Soaps.com: You worked with some pretty recognizable actors on this movie, like Dean McDermott and Barbara Eden. What were they like to work with?

Rena: They were all great. There just wasn’t a bad moment in this movie; there wasn’t a bad day. It was really as wonderful and as uplifting as the movie was. Barbara Eden was just a joy to be around and to work with. It’s always fun to work with actors who have such great stories about people you’ve only heard about in archive interviews, and Leonard Maltin talking about the greats, and all of a sudden here’s Barbara Eden going, “Oh, when I did a movie with so and so,” and you’re like, “Wow! You did a movie with so and so? Oh my God!” It’s just an incredible experience.

Soaps.com: You look fantastic in the movie. What do you do to stay in shape and keep healthy?

Rena: I don’t diet. I exercise quite often. I’m very into hula hooping. I hula hoop for like an hour probably five times a week and that keeps my stomach and my back very strong and I work out at home. We have a home gym so I get on the elliptical or do lunges around the house, stuff like that. I get my US and People magazines and I read them on the elliptical machine. So you know, I’m not crazy or anything. I’m an older woman who just doesn’t expect to look like a twenty-year-old so I don’t try to. I just eat what I want, but I eat in moderation and I don’t smoke and don’t drink and I take care of myself.

Soaps.com: You’ve continuously worked throughout your career appearing in TV series, TV movies and feature films. Do you enjoy the variety and freedom of going from project to project or would you like to land a long running series?

Rena: I don’t know any actor, other than ones that want to be movie stars, that don’t want to land a long running series and want to be on something for quite awhile. The ones who tell you they don’t want to are lying. (laughs) It’s true, especially now when you see so many movie stars doing television shows. But yeah, that’s always been a goal. That’s why I do pilots; that’s why I work on TV as much as I do. You always want to kind of go somewhere and have some place to stay. A lot of actors like the nomadic life. I don’t. I’m somebody who likes to be home and be with my family and stay with my kids, but I would love to. That’s just part of the daily actor grind, auditioning for things that hopefully can catch on.

Soaps.com: Do you have any other projects coming up in the near future or anything that you’re working on?

Rena: Nothing acting wise that I’m working on at the moment. Pilot season is about to gear up and that’s where my focus will lie for that in the next few months.

Soaps.com: Do people still come up to you and recognize you as Lois from General Hospital?

Rena: Yeah, I mean they do. Not as much, I mean I think it’s been thirteen years since I’ve been on the show. People remember me or still go, “You were on that show,” or something like that, but there are definitely people who say, “Oh my God, I loved Lois. She was my favorite character,” or something like that, or they’ll tell me about the nails. You know, not as much any more.

Soaps.com: Have you ever considered, or been approached to do another soap over the years?

Rena: I’ve never been approached to do another soap over the years. I was asked to go back to General Hospital in a very non-formal way, but it’s definitely not an option at this point.

Soaps.com: Were you asked to come back recently or was this awhile ago?

Rena: It was a couple years ago I think. It was made clear to me that I could have a home there if I wanted to have a home there, but I don’t know how…I don’t think that would be the best. It’s difficult because I was married to someone on the show that I was married to in real life and we’re not married anymore so you know, you bring me back, there’s probably going to be the question of bringing somebody else back and I don’t necessarily think…I couldn’t control that and that just wouldn’t work, so it’s a difficult situation. It’s a great character I would love to play again. It was a great character that I enjoyed, probably one of my favorite characters that I’ve ever played. It’s the circumstances surrounding it that wouldn’t necessarily work as well.

While you probably won’t see Rena in Port Charles again, you can take solace in knowing you can catch her in various other places, such as “Always & Forever,” which premieres on the Hallmark Channel on October 24 at 9:00 PM EST.

For a sneak peek at the movie, watch the trailer here.

Stephen Amell, 40, Claps Back After Critic Says He Looks ‘Out Of Shape’ In Shirtless Photo