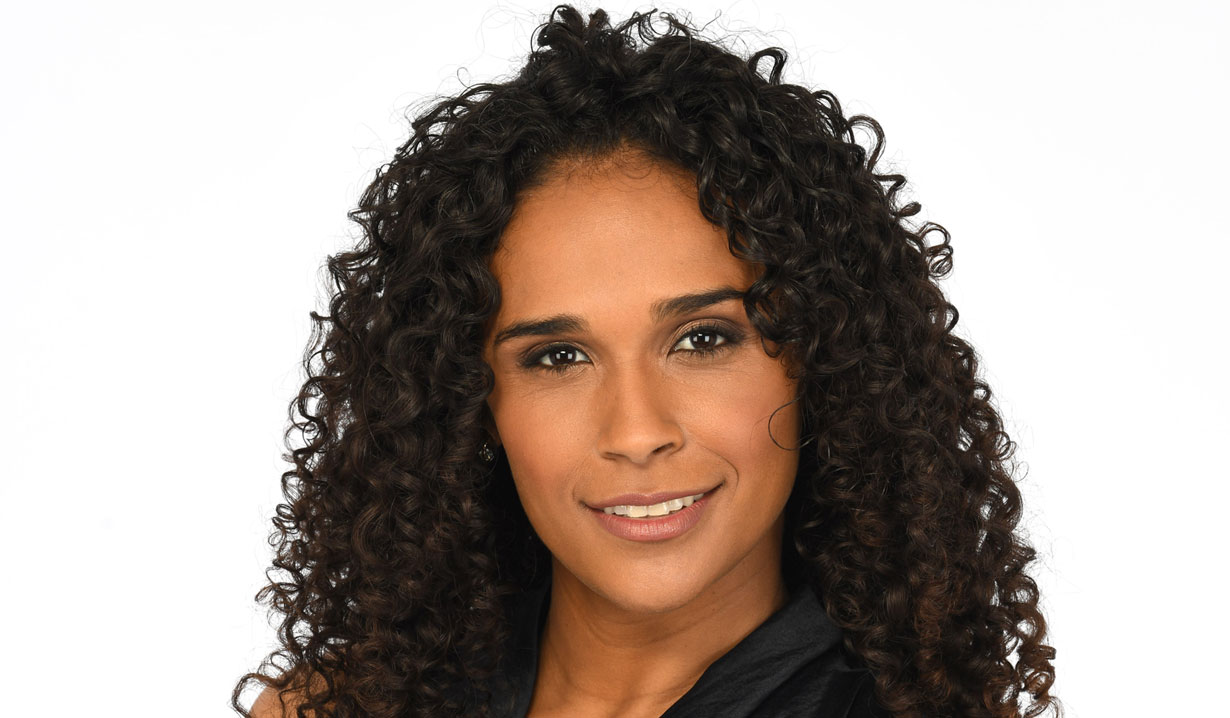 Henry shared photos of the special day on Instagram. The wedding was held outdoors for safety reasons.

No humans were harmed in the making of this wedding 🙏🏾. I’d also like to take a second to thank @megsmithphotography and @charlotte_and_daughters. You ladies helped us pull this day together in the 9th hour. Thank you for doing all that you did with love.

She wore a simple, but elegant white dress with a slit up the leg, accompanied by strapped heels and a clip-on hair veil for the occasion. Henry wrote on one Instagram photo, “No humans were harmed in the making of this wedding I’d also like to take a second to thank Meg Smith photography and Charlotte and Daughters. You ladies helped us pull this day together in the 9th hour. Thank you for doing all that you did with love.”

I love y’all. Thank you for holding space for us in your lives and on this day.

Her bridal party dressed in a variety of colorful summer dresses, each carrying a unique bouquet of flowers. Guests were provided face coverings with the couples’ initials and the date of the wedding.

Henry and Bowers became engaged in December of 2018. Her now-husband Bowers posted a video of him proposing to her on Instagram. The couple has been together since 2016. Henry joined General Hospital in September 2018 after Vinessa Antoine left the role. She previously played Esmeralda on The Young & Restless. Bowers is a composer and pianist. He has composed scores for films, video games, television and documentaries including, Green Book, Dear White People and most recently Ava DuVernay’s Netflix mini-series When They See Us. He has recorded, performed, and collaborated with the likes of Jay-Z, Kanye West, and José James, and his debut album Heroes + Misfits was released in 2013.

Take a look at some unforgettable moments in our soap opera weddings gallery below, including Curtis and Jordan Ashford’s shocking wedding night…

<p>Eric Forrester and Brooke Logan married for the first time in 1991 on<em> Bold & Beautiful</em>, and present at the ceremony was not only Eric’s ex-wife and the mother of his sons, Stephanie Forrester, but his son Ridge who was the bride’s former lover. As if that wasn’t strange enough, Eric arranged for him and Brooke to depart the wedding reception and begin their honeymoon in a most unusual way, by hot air balloon.</p>

<p>Brooke and Ridge Forrester eloped for their third wedding on <em>Bold & Beautiful</em>. The couple headed to South America in one of B&B’s most unique weddings where they married in the middle of the Amazon Jungle. Ridge wore an Incan inspired outfit, without a shirt or his trademark scarf, while Brooke donned a headdress and hot pink gown. Shortly after the ceremony, Sheila Carter kidnapped Ridge, who was later presumed dead.</p>

<p>In 2006 Brooke Logan married Ridge Forrester’s half-brother Nick Marone on <em>Bold & Beautiful.</em> This came after trying to marry him once before, only that wedding was stopped by Ridge, who everyone thought had died while honeymooning the year before with Brooke in South America. </p>

<p>Steffy Forrester married Liam Spencer for the first time in 2011 on <em>Bold & Beautiful</em>. The outdoor wedding was filmed on a mountaintop in Aspen, Colorado.</p>

<p>In 2009 Brooke and Ridge Forrester were again married at Point Dume on <em>Bold & Beautiful.</em> Ridge had his and Brooke’s names carved out in the sand surrounded by a heart. The wedding was a private affair between the two of them.</p>

<p>Eric Forrester married Quinn Fuller at his home in 2016 on <em>Bold & Beautiful</em>. Celebrity blogger Perez Hilton, playing Reverend Murphy, married the couple while the portrait of Stephanie Forrester hung behind them above the fireplace mantel. </p>

<p>Wyatt Spencer and Steffy Forrester married one another on the beach in 2016 on <em>Bold & Beautiful</em>. Chaz Bono, in a guest appearance, presided over the wedding. The couple recited personalized vows to one another. </p>

<p>In 2016 on <em>Bold & Beautiful</em>, Bill Spencer and Brooke Logan made a second attempt at marriage. as Brooke walked down the aisle, her ex-husband Ridge Forrester stopped the wedding and professed his love for Brooke. It was the second time he had stopped a wedding between Brooke and Bill.</p>

<p>In 2015 the Forrester mansion saw yet another marriage. This time <em>Bold & Beautiful’s</em> Rick Forrester and Maya Avant were married. Maya’s sister would later act as a surrogate for the couple to have a child. Sadly the marriage did not last and Rick left Maya.</p>

<p>In 2019 on <em>Days of our Lives</em>, Tripp Johnson married Haley Chen, with Justin Kiriakis officiating the wedding. The marriage was an arrangement between the friends in order to try and keep Haley, who was in the country illegally, from being deported. </p>

<p>While many remember Bo and Hope Brady’s <em>Days of our Lives</em> wedding shot on location in England, it’s hard to forget in 1984 when Bo stopped Hope Williams and Larry Welch’s wedding. Salem’s crooked DA Welch schemed to marry Hope, but Bo wasn’t having it. Bo’s friend Howie Hoffstedder dressed up in Hope’s dress and walked down the aisle, much to Larry’s surprise when he lifted her veil to find the scruffy-faced man pursing his lips for a kiss. Bo meanwhile kidnapped Hope, threw her on the back of his bike and took off as Bonnie Tyler’s Holding Out For a Hero blared.</p>

<p>John Black and Kristen DiMera’s 1997 wedding was one of the most unusual in<em> Days of our Lives</em> history. Nobody knew that John was actually marrying Kristen’s look-a-like Susan Banks, who had locked rivals Marlena Evans and Kristen DiMera in the DiMera secret room because she had fallen for John. Susan convinced John to have an Elvis themed wedding, complete with her own Priscilla Presley inspired wedding gown. Susan was exposed when Marlena’s good friend Laura Horton confronted who she thought was Kristen because she believed she had done something to the missing Marlena. During a fight Laura knocked out Susan’s false teeth, which flew across the backyard and landed in Vivian Alamain’s drink.</p>

<p>In 2018 on <em>Days of our Lives</em>, Rafe Hernandez and Hope Brady were set to be married at Doug’s Place. The wedding was interrupted by Claire Brady, who revealed Rafe had cheated on Hope and slept with his ex-wife Sami Brady. Hope and most of the guests were stunned by the revelation, never expecting this from Rafe. </p>

<p>In 2019, after returning from the dead and with amnesia, <em>Days of our Lives’</em> Jack Deveraux ran for mayor of Salem with Eve Donovan as his campaign manager. In an election stunt he proposed marriage to Eve, and the couple was reluctantly married by Jack’s sister Adrienne Kiriakis. </p>

<p>In 2019, after finding their way back together, Chad and Abigail DiMera were remarried in a small intimate ceremony with friends and family at the Horton House. Julie Williams presided over the wedding. Right after, Abigail, Chad and their children moved to Paris where Chad ran an overseas division of DiMera Enterprises. This was spun off into the digital <em>Days of our Lives</em> series <em>Chad and Abby in Paris</em>. </p>

<p>Luke and Laura Spencer’s 1981 <em>General Hospital</em> wedding was viewed by 30 million people and remains the highest-rated hour in daytime history. The part of Helena Cassadine was created for the late Elizabeth Taylor, who was a fan of the show, and the wedding was the character’s debut. She gifted the couple with her famous curse. Of course, many fans also remember the square dancing at the reception, the fistfight between Luke and Laura’s ex Scott Baldwin, and Laura’s larger-than-life dress and veil that set the standards for soap wedding dresses for the rest of the 80s.</p>

<p>In 2016 on <em>General Hospital</em>, as Alexis Davis and Julian Jerome tied the knot in a church wedding all hell broke loose. During their first kiss as husband and wife, Landon Dixon, a black market gun dealer running from the law, burst into the church and took Alexis and Sonny Corithos’ daughter Kristina Davis-Corinthos hostage, only to be thwarted by Sonny.</p>

<p><em>General Hospital’s</em> Curtis and Jordan Ashford were married in 2018, with Curtis’ Aunt Stella Henry giving them her blessing at the wedding. Stella had long blamed Jordan for the death of her nephew and Jordan’s first husband, Thomas Ashford. The couple celebrated on The Haunted Star, only to find Kiki Jerome murdered and left in their honeymoon suite bed.</p>

<p><em>General Hospital’s</em> Frisco Jones and Felicia Cummings met when Felicia tried to rob Frisco of an Aztec artifact, which she claimed was part of her family’s treasure, and she was of royal Aztec heritage. He helped her recover her birthright, and the couple was wed in 1986 at the iconic Brownstone. Frisco wore his dress blues, having recently enrolled in the police academy, and Felicia a lace dress and veil inspired by her Central American heritage. At the reception, Frisco serenaded his bride with the song Lady of my Heart. Actor Jack Wagner had a huge radio hit around the same time with All I Need.</p>

<p>In 2009, Sharon Newman and Adam Newman eloped for Christmas on <em>Young & Restless</em>. The couple was married in Lake Tahoe. On the way back to Genoa City, the Newman jet they were on crashed. As the plane was going down, Adam revealed to Sharon that her baby she thought had died was alive. However, a concussion left Sharon with no memory of Adam’s confession. </p>

<p>On <em>Young & Restless,</em> Kyle Abbott and Summer Newman were married in 2019. Kyle was in love with Lola Rosales, who was in need of a liver transplant. Summer was a match, and Kyle agreed to marry her if she donated a portion of her liver to Lola.</p>

<p><em>Young & Restless’</em> Kevin Fisher and Jana Hawkes’ romance began when Kevin hired Jana to work at Crimson Lights, but the old soap opera brain tumor reared its ugly head and caused Jana to try and kill Kevin while pursuing a Nazi treasure. However even the tumor couldn’t stop their love, and after all the craziness they endured the couple chose to be married in a tranquil ashram in Malibu, California in 2008. In true soap fashion the guru who married them turned out to be Michael’s long-lost father Lowell “River” Baldwin (Michael Gross, Family Ties).</p>

<p>As with many soap romances, <em>Young & Restless’</em> Nikki and Victor Newman came from opposite sides of the tracks. Victor Newman was a powerful businessman and member of the upper class when he met stripper and former prostitute Nikki Reed. The couple was wed for the first time in 1984. Their wedding contained all the glitz and glamour of daytime, including taking place in a candlelit ballroom, underneath beautiful chandeliers, and surrounded by Greco-Roman columns. Nikki’s gown was covered in sequins and her veil featured a jeweled tiara. No expense was spared by Victor!</p>

5 Reasons Why Hayden Barnes Should...