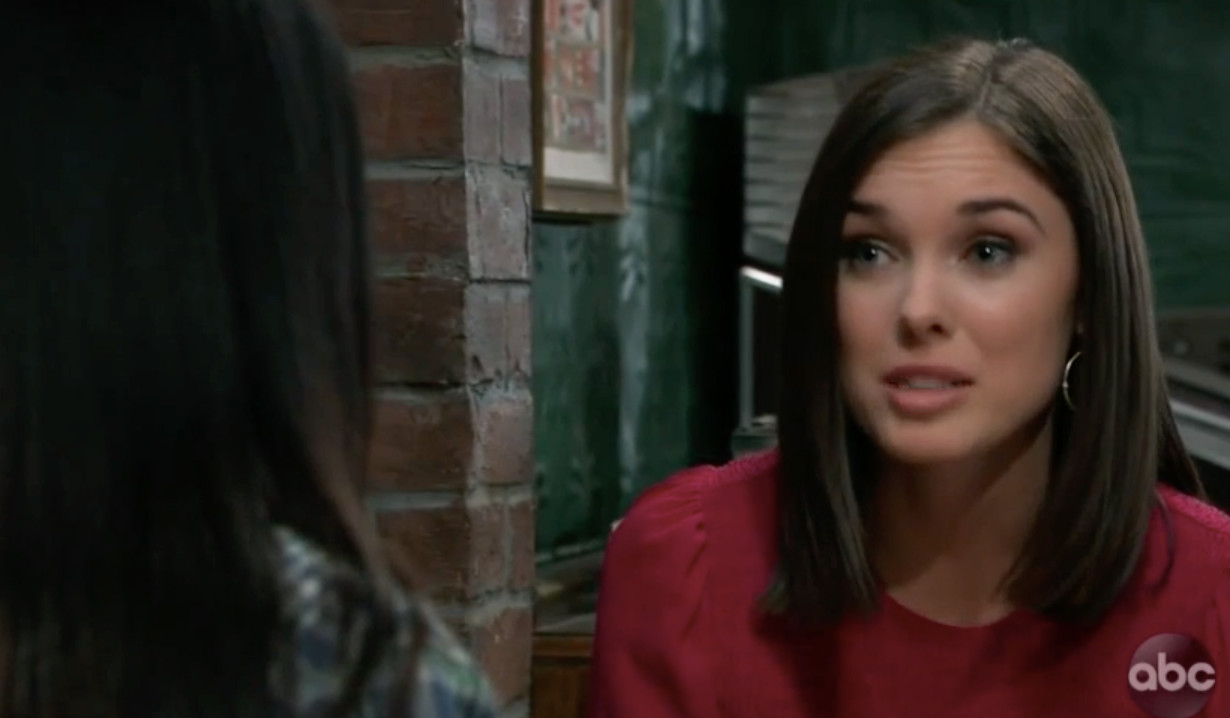 Read part one of General Hospital’s Fan Fiction: Cyrus Renault sets his sights on a new target in the war against Sonny Corinthos before reading this next installment, which begins with Lorraine (aka Harmony) trying to distract her daughter…

Lorraine sits drinking a glass of water at the table as she awaits her daughter. Before long, Willow emerges from the elevator. “Hi, mom?” says Willow as she smiles painfully. “You look upset. Is everything alright?”

Lorraine straightens her face, “So,” she clears her throat, “When were you going to tell me that you got married?”

Willow is stupefied, “I can’t believe that I forgot. I’ve been so caught up in the custody battle that…”

“Custody battle? You mean with Wiley?”

“Michael needed to help his case against Nelle.”

“So by marrying him, you help to tilt the scale of justice in his favor?”

Willow says nothing but shrugs her shoulders. Her mother grabs both of her hands, “You know, Kali, I’ve always admired your strength to stand up for the right thing. You’ve done that when standing up to Dawn of Day, with fighting for me, and now a little boy who needs a good example in his life. But sometimes Kali…” she hesitates.

“You’re starting to sound emotional. Mom, is everything okay?”

“Of course. It’s just that… I’ve learned from you that fighting for the ones that you love is the greatest accomplishment a person could do. When I was in Pentonville, there wasn’t a day that went by that I’ve regretted what I’ve done to you. All I want to do now is to have a chance to start over.”

“I would love that more than anything. Unfortunately, now, I have to make sure that Wiley is safe from being used and manipulated.”

“I was just thinking maybe just for a day. Just take the whole day tomorrow for ourselves.”

“I have to go to court tomorrow.”

“Are you going somewhere?” Willow asks with suspicion.

Meanwhile, Michael is driving Wiley to the metro court. Suddenly, the tires on his car blow out and he is forced to pull over. He looks back to make sure Wiley is okay. He then gets out of the car to inspect what had happened. He doesn’t think too much of it and gets his phone out.

At the metro court, Lorraine is trying to find the answer to Willow’s question, “I just felt that ever since I was released, we haven’t had much time together.”

“What have you been doing while I was busy?”

Before Lorraine can answer, Willow picks up the phone, “Hello?”

“Hey, Willow. Wiley and I were just on our way to the metro court, but the tire blew. I’m
going to have to call a tow.”

“Okay, I’ll be right there. Make sure Wiley stays warm.” Willow immediately puts the phone in her purse.

“Where are you going?”

“Michael and Wiley are stuck on the road. I have to get to them.”

Lorraine quickly grabs Willow by the arm, “Just stay a little while longer.”

Willow is shocked by her mother’s v action, “I have to get to Wiley. He has something going on with his heart. Michael doesn’t have the right to get him treatment right now, so we can’t risk him getting sick.”

“You’re not obligated to them, Kali!”

“But I’ve given my promise that I would do whatever it took to keep Wiley safe and protected.” Willow pulls away, “I swear that I will meet you another time on a better day.” She races to the elevators.

Lorraine grabs the glass of water she was drinking and furiously throws it to the ground, catching Carly’s attention who is just entering the room.

What do you think will happen next? Speculate by joining the conversation and take a look at the gallery below featuring other challenges that Sonny has had to face throughout the years…

Read more Soaps’ fan fiction surrounding stories about Bold and Beautiful, Days of our Lives, General Hospital, and Young and the Restless. If you’re a fiction writer and want a chance to have your fan fiction featured, email us.