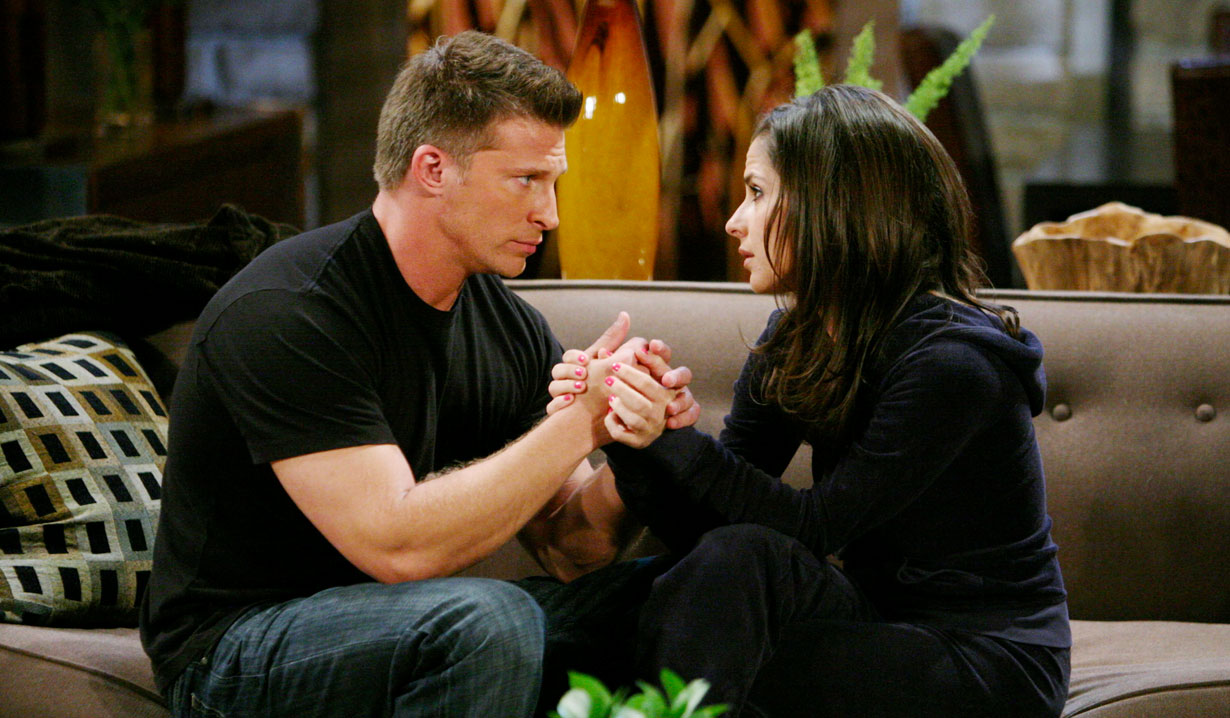 An adventurous and often danger-filled romance.

This week General Hospital is airing Jason and Sam episodes spanning from December 2003 to September 2011. Steve Burton joined General Hospital on December 19, 1991 as a SORASed Jason Quartermaine. Kelly Monaco joined the soap opera as Sam McCall on October 1, 2003. This week viewers will be taken on a journey through some of the couple’s best and most memorable moments, including how they met. Their relationship has had its ups and its downs, but the couple always seems to fight to stay together.

Jason Quartermaine was the son of Alan Quartermaine (Stuart Damon) and his mistress Susan Moore (Gail Ramsey). Alan’s wife Monica (Leslie Charleson) adopted him as a baby and raised him. The golden child of the family, he was set to go on to become a doctor like his parents, but that changed when he was involved in a car accident while his brother A.J. (Sean Kanan) was driving drunk, and severe brain injuries left him with no memory of his life before. He took the name Morgan as his last name, which was his grandmother Lila’s (Anna Lee) maiden name and eventually met Sonny Corinthos (Maurice Benard), who took him in under his wing and led him to become the enforcer he is today. Sam arrived in town over a decade later working with Jasper Jacks (Ingo Rademacher) to find the five lucky cards of the Dead Man’s Hand. A later affair with Sonny would lead her to become involved with Jason. Over the years their love has survived near-deadly tumors, a faked death, and numerous dangerous adventures.

The couple has one child children together, Danny. Her affair with Sonny led to pregnancy for Sam, but her daughter Lila died shortly after birth. Kristina Corinthos (Lexie Ainsworth) was saved by Lila through an umbilical cord stem cell transplant to treat her leukemia. Later, believing Jason’s twin Drew Cain (Billy Miller) to be Jason back from the dead, she had a daughter, Emily “Scout” with him. Jason also has a son Jake with Elizabeth Webber (Rebecca Herbst).

We invite fans to revisit five emotional moments in Jason and Sam’s relationship, which will be featured in this week’s ABC encores, through the gallery below. Be sure to sign up for Soaps.com’s newsletter as not to miss spoilers, breaking news, interviews and more.

<p>We’re taking a trip down memory lane with 5 memorable moments in Jason Morgan and Sam McCall’s relationship on General Hospital. Looking back on December 3, 2003, Sam met Jason for the first time when they were both arrested for aiding and abetting Sonny Corinthos, and placed in the same interrogation room. Jason figured Scott Baldwin had her arrested only to try and testify against him. Sam said she’d consider it, if she knew who he was. </p>

<p>Sam remained unconscious after giving birth to her and Sonny’s daughter Lila. Jason stayed by her bedside waiting for her to wake up. At the same time he agonized over having to tell Sam that she lost her baby.</p>

<p>Sam and Jason vacationed in Hawaii. Sam found a water gun by the beach and used it to soak Jason. Jason and Sam had no idea their blissful vacation was about to be ruined by Manny and his henchmen.</p>

<p>Jason invited Sam for a night out to eat dinner on a beautiful rooftop. Sam suspected something was up. Jason asked her to take a ride of a lifetime with him and propose using a chrome nut as a temporary substitute for an engagement ring.</p>

<p>Sam and Jason’s wedding got off to a rocky start, and Sam was unsure she could go through with it. The two took off on Jason’s bike and ended up at the closed Noodle Buddha, where the owner’s grandson fixed them some food. The two chose the place for a private wedding. </p>