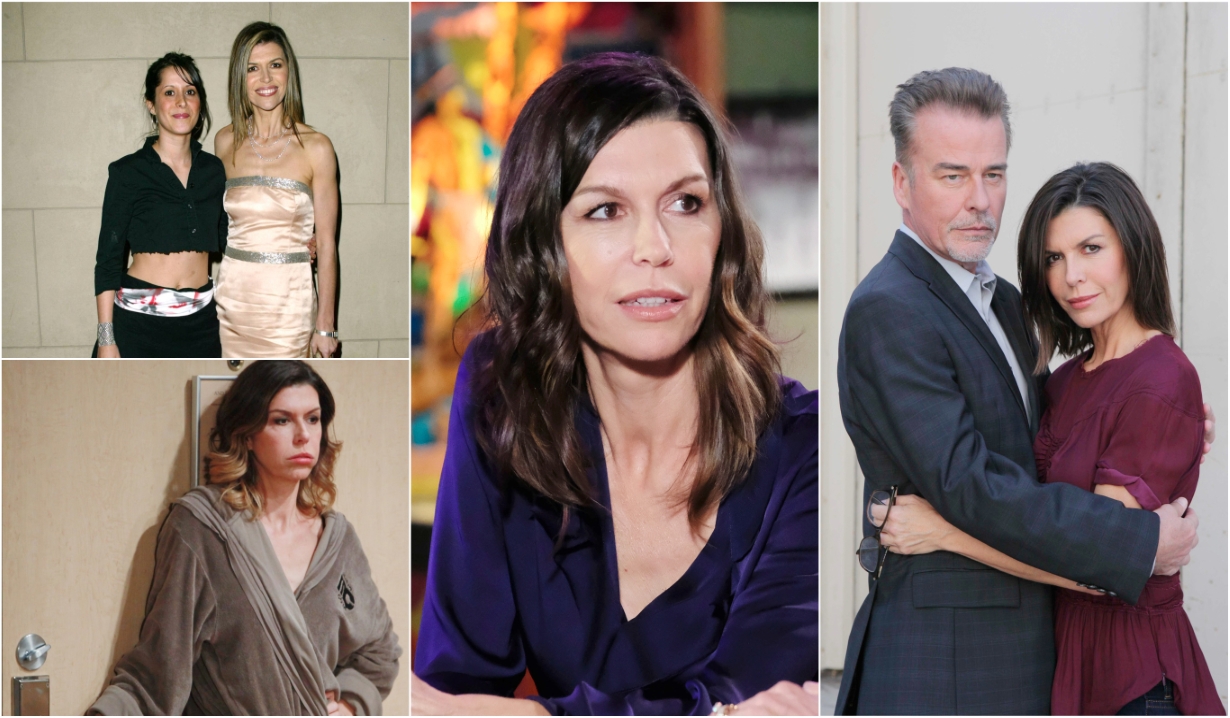 Finola Hughes arrived on General Hospital 35 years ago today, on April 10, 1985, as Anna Devane. Previous to this, the London-born actress and dancer was best known for her role in the Saturday Night Fever sequel, Staying Alive. She also popped up briefly on Fox’s primetime soap opera Pacific Palisades, frequently guest-starred as the matriarch of the Halliwell family on Charmed and Hughes directed Freeform’s Good Trouble.

Anna Devane has a twin sister named Alexandra, who is also played by Finola Hughes.

Anna arrived in Port Charles as a jewel thief, but was later revealed to be a spy working undercover.

It was also revealed that Anna Devane was Robert Scorpio’s (Tristan Rogers) ex-wife, which caused considerable friction between he and his wife, Holly (Emma Samms) when they began working together.

Although Anna and Robert reunited after Holly left him, their relationship was soon rocked by the revelation that she had been keeping his daughter Robin (Kimberly McCullough) from him. Even when they would split up, Robin’s occasional kidnappings would always keep them in each other’s orbit.

Anna had a rocky relationship with nightclub owner and mobster Duke Lavery (Ian Buchanan). This was complicated by the violent involvement of the Jerome family, in particular Olivia’s (Tonja Walker) obsession with having Duke for herself. Anna and Duke would reconcile years later, but he was then murdered.

Anna Devane had to deal with an obsessed maniac in love with Cesar Faison (Anders Hove). Faison kidnapped her and, for a while, had apparently killed her in a boat explosion. They would both return from the dead and briefly dated when he was disguised as Duke.

After being nursed back to life with the help of her sister and coping with a bout of amnesia, Anna wound up getting involved in intrigue in Pine Valley. This included marrying David Hayward (Vincent Irizarry), who turned out to be the son of the drug kingpin she’d been hunting, Proteus (Marj Dusay).

Anna has been the police chief in both Pine Valley and Port Charles, resigning from the first and getting fired from the second.

She helped Casey the alien return to his home planet, thus ending one of the most controversial stories in Port Charles history.

Finola Hughes has won five awards, including an Outstanding Lead Actress in a Drama Series Daytime Emmy, for her portrayal of Anna Devane.

<p>Finola Hughes created the role of Anna Devane in 1985. In 1991 actress Carmilla Moore filled in as a temporary replacement. This was one of Hughes’ official headshots.</p>

<p>Luke and Anna working together while she was with the Port Charles Police Department. This was during their brief romance.</p>

<p>Luke and Anna are in fancy dress for a masquerade. Anna is dressed as a flapper.</p>

<p>Felicia joins Anna to offer her support at the court house. It looks as though upsetting news was delivered.</p>

<p>Faison and his goons attack Anna. This wouldn’t be the first time he went after her.</p>

<p>Anna in a dramatic moment. This is from Finola Hughes’ Daytime Emmy reel for 2017.</p>

<p>Nina confronts Anna at her home. They argue about Valentin’s feelings.</p>

<p>Anna enjoys a cup of coffee at home. She and Finn discuss a case.</p>

<p>At the Metro Court, Finn confronts Anna and Peter with what he knows. Anna continues to defend Peter from the doctor’s suspicions.</p>

<p>Dominic Zamprogna, Finola Hughes, William deVry together for the Disney/ABC Television Group. This was part of a 2014 Winter Press Tour Party.</p>

Nathan Varni Thanks Cast, Crew, and...