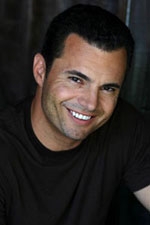 Trying to get to the bottom of when Valentin will finally appear on GH, Soaps.com asked his portrayer for the scoop. Unfortunately Borlenghi couldn’t give us too much info, as he said, “I can’t comment at this time on when Valentin will rear his evil head. I have not begun taping yet, but would believe that I will show up sometime not too long after Helena. That is only speculative, of course.”

To find out when Helena and Valentin will appear in Port Charles, keep an eye on our Comings and Goings section.

According to Soap Opera Digest, Matthew’s stint as Valentin has been delayed until later this year and not in October as originally reported.

Borlenghi will first appear as Valentin on October 14 with the last name of Cassadine!

Sources have confirmed to Soaps.com that Matthew Borlenghi is coming to General Hospital in the recurring role of Valentin.

Borlenghi is no stranger to soaps, as he played Mayor Marino on Days, Ziggy Deadmarsh on The Bold and the Beautiful and Brian Bodine on All My Children.

There is no word on when Matthew will begin airing in Port Charles or the details of his character, but Soaps.com will keep you posted.