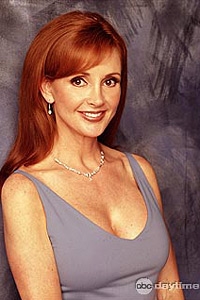 Photo by Adam Larkey for ABC.

Soaps.com recently announced that General Hospital has been recognized for its “accurate, fair and inclusive representation of the gay�community�” by receiving a nomination for a GLAAD award at the March 26 ceremony in New York City. When Lucas Jones came out in 2006 to his parents, Bobbie and Tony Jones, there were some mixed reactions and ultimately, unconditional love and acceptance.
Soaps.com was fortunate enough speak with one of the key players in this acclaimed storyline � Jackie Zeman who plays Bobbie Spencer Jones. In a conversation with Soaps.com GH Editor Julie Clark Robinson, Jackie said, “When the scenes between Lucas and Bobbie were airing, so many people told me that they were touched by the reality of Bobbie’s reaction to Lucas’ coming out. Quite a few men told me that their mothers reacted the same way. Ben (Hogestyn, currently a cast member on Bold and the Beautiful ) was excellent in the role.”

What's more, Jackie went on to express her personal wishes in how her character's son could come back onto the front burner. "I'm hoping Lucas will come back into the storyline because our long-time viewers have watched him grow up and there is an emotional connection to the character. Daytime TV has the ability to offer our audience great value in return for the investment (of time) that our viewers give to the show. It's exciting and comforting to relate to the behavior of a character with whom we have shared a lifetime.

Jackie adds, "If our writers should decide to explore this opportunity further I think there is potential for interesting and gratifying story. I also believe that our audience has always demonstrated great generosity of spirit with their allegiances to the GH family. I'm betting we could do some "edgy" scenes which our viewers would welcome."

She's got that right! We'd love to see Lucas's character develop and add another dimension to those already irresistible Spencer family dynamics. If you agree, why not let the powers that be know? You can contact them at netaudr@abc.com or via snail mail at:
General Hospital
c/o ABC-TV
4151 Prospect Avenue
Hollywood, CA 90027

Thank you Jackie Zeman for giving Soaps.com fans a look into the head of the actress in this award-worthy storyline. Good luck in the GLAADS!