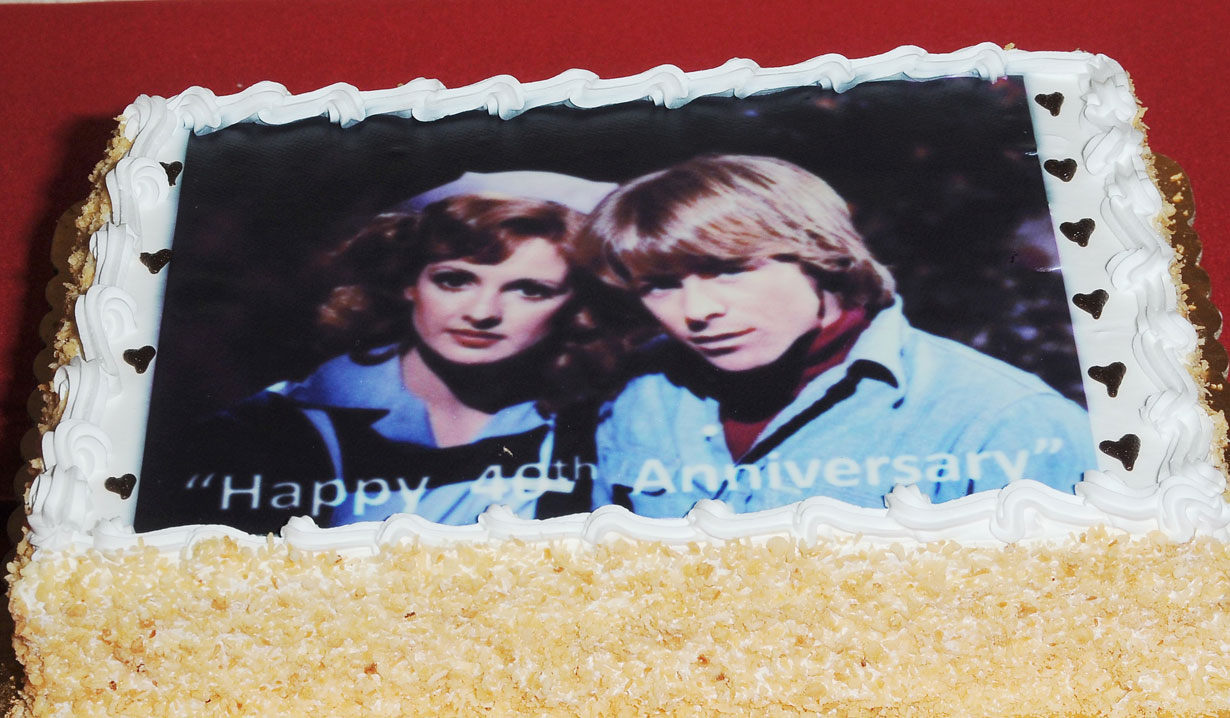 Jacklyn Zeman recently spoke to TV Insider about playing nurse Bobbie Spencer on “General Hospital” for 40 years in December. Barbara Jean Spencer, her full name, was the first Spencer introduced in 1977. While she had grown up in Port Charles, she only returned as a young nurse and part time prostitute, who had given up a child for adoption. Bobbie fell head over heels for Scott Baldwin, who was at the time in love with Laura Webber, so Bobbie brought her brother to town to help break them up. That would be long-time “GH” cast member and a favorite of many Soaps.com readers, Luke Spencer played by Anthony Geary. When asked why after 40 years Bobbie is still so popular, Zeman said she believes it is because, “She’s been through hell and came out the other side. She and her brother Luke [Anthony Geary] were raised in a whorehouse by their aunt Ruby [Norma Connolly], the madam, who one day said to Bobbie, ‘It’s time to sing for your supper!’ And then Bobbie got pregnant, at age 14! She has survived a lot of crap, but she faces her fears. And now she’s wise and the salt of the earth. The fans like that. They think, ‘If Bobbie can pull out of her hell, I can figure out my own problems.’ Bobbie gives you hope.” When asked about her part in the iconic Luke and Laura story, seeing she brought Luke back to town, Zeman remarked, “We were all so hot at the time that people actually dressed like us for Halloween. There were Bobbies everywhere, with their curly red wigs, the boobs, the little nurse’s uniform. It was insane!” Over the years, Bobbie wasn’t afraid to get her hands dirty to both get what she wanted, and protect her loved ones. When asked about Bobbie’s bad girl antics Zeman noted, “I remember getting a Soap Opera Digest award for Best Villain one year, I think maybe when Bobbie was switching pregnancy tests, and while I certainly appreciated the award, I was kinda like, ‘Really? Wait a minute. I play a villain?’ I never saw her that way! Bobbie always had an agenda, but it never came from an evil place. It was always about moving herself forward and making life better for her family, never to hurt anybody. Laura Wright [Carly] and I have some scenes coming up where our characters talk about karma coming back to kick them in the ass. The writers don’t forget our history. The audience is going to love it!”

While Bobbie has been married or entangled with a few gentlemen over the years, it’s hard to forget Scott was always her first love. However they never worked out. Zeman believes when their romance was new that, “Bobbie was all ready to get married, have children and live happily ever after. Scotty, on the other hand, thought Bobbie was a fun, hot little number and a great way to spend a weekend, but his heartstrings were pulled by Laura, who was very needy. Scotty wanted to be the hero and he couldn’t be that with Bobbie, who was always self-sufficient. She wasn’t looking to be saved. She was looking for an equal.”

Jacklyn Zeman may be known for playing Bobbie Spencer, but her actual start on soap operas was a small part as Bobbi the stewardess on “Edge of the Night” in 1976. Her first real break came that same year as Lana McClain on “One Life to Live.” She remembers that, “I had auditioned for ‘Ryan’s Hope’ but later that same day I was offered the role on ‘OLTL.’ And I was still playing Lana when I was cast as Bobbie. Lana was pregnant but drinking, and Brad the baby daddy, played by Jameson Parker, gave her sleeping pills in a glass of milk. And it killed her. Brad was only trying to calm Lana down, not murder her. He needed time to figure out what he was going to do about the pregnancy. He had no idea he was mixing pills with liquor. It was great, shocking writing. And Lana was still dying on the couch in her black lingerie when Bobbie was popping out of an elevator for her first scene on ‘GH.'” On today’s soaps it’s not unheard of for one actor to crossover to another soap by playing the same character, or for an actor to simultaneously appear on two shows. Eileen Davidson is currently on both Days of our Lives and The Young and the Restless, while Wally Kurth goes between “Days” and “GH.” Back then though it was so out of the norm that Zeman went out of her way to make sure her characters looked different. “You could watch me on ‘OLTL,’ then stay tuned and see me on ‘GH,’ 10 pounds lighter. I had put on those extra pounds so that Lana would look kind of bloaty because her life was a disaster, and then I literally did not eat for three days before starting ‘GH’ in order to drop the weight. I had brown hair as Lana, red hair as Bobbie, and Bobbie was very bouncy and peppy. The idea of an actor appearing as two different characters on two different soaps at the same time was unheard of in those days! A real BFD! They didn’t want to confuse the audience. Now it’s no big deal.”

When asked about grandest moment on “GH,” Zeman quickly pointed out hers might be the best moment in the soap’s history to that date. That was the death of her adopted daughter BJ. “I think that story was the grandest moment for our show. Up to that point, ‘GH’ had been big on romance and fantasy and mystery, but the BJ story really affected the audience in a deep and emotional way. Losing a child is a parent’s worst nightmare, yet it was written so beautifully, so thoughtfully, by Claire Labine. It really anchored our characters, and it gave the audience everything.” And as for celebrating 40 years on the show, Zeman is proud of her accomplishments and wants people to know that, “Soaps matter. OK, what we do isn’t brain surgery, but so many of Bobbie’s stories, the abusive marriage that led to her hysterectomy, her daughter being killed by a drunk driver, have had people stop me on the street and say, ‘That happened to me too, and you really helped me get through it.’ Yeah, we’re here mostly to entertain but we are also relevant. The people who watch ‘GH’ connect with us as if we are family, and I am so proud of that! What we do is important.”