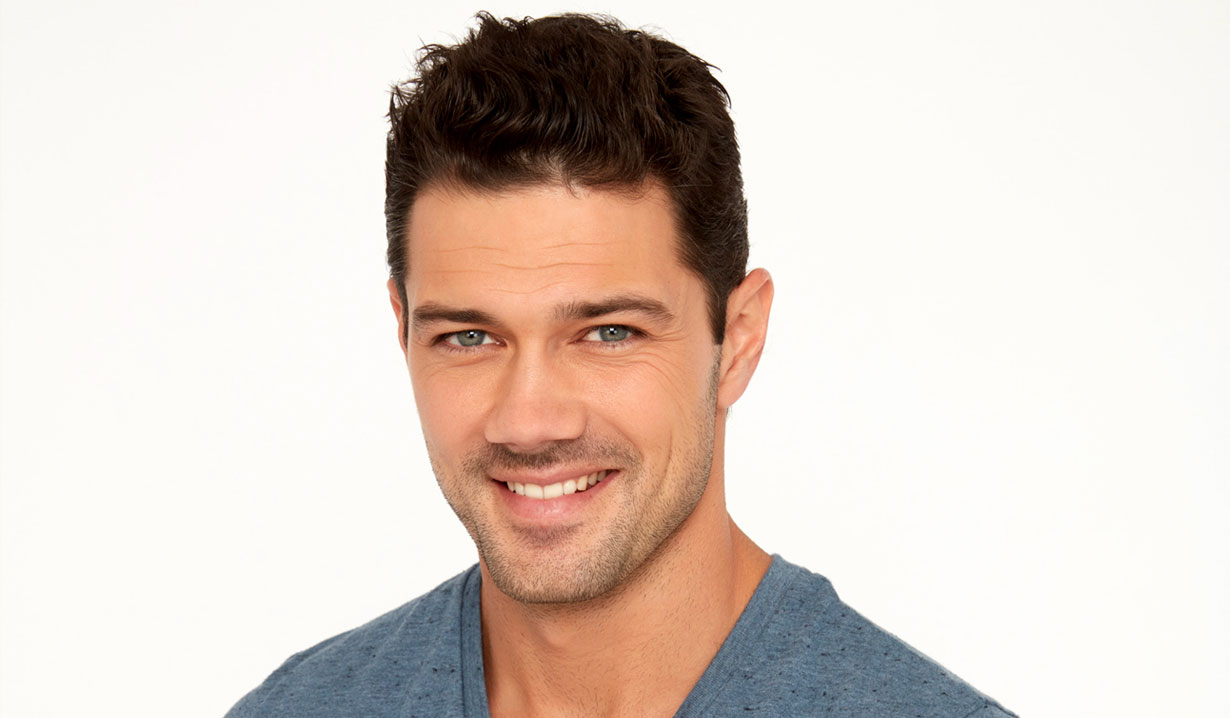 The many sides of Ryan Paevey.

Soaps.com had a chance to speak with “General Hospital’s” Ryan Paevey (Port Charles’ Narthan West) about his upcoming Hallmark film Harvest Love with Jen Lilley (Theresa Donovan, “Days of our Lives”) as well as other projects he’s been working on. In the second part of our interview, Ryan Paevey discusses Nathan, Maxie, and other General Hospital topics.

Soaps.com: Thank you for taking the time to speak with us today.

Soaps.com: So tell us all about your most recent Hallmark film “Harvest Love” with Jen Lilley.

Paevey: I play Uncle Dash, and she [Jen Lilley] plays Luna Neilson. So to give you a little description of the film, Luna is a successful doctor and a widow, she has one son, and is a bit of a workaholic. Her family owns a farm and to the behest of some of her co-workers, and in an attempt to reconnect to her son who she’s grown a little distant from, she decides to pay a little visit to the family farm to reconnect with her kiddo, stop working for a bit, get out of town and clear her head. I manage said farm where I have plans of my own to open up my own farm and I’m a bit of a geneticist I suppose. I’ve cross-bread pears to make a hybrid fruit. But like all Hallmark movies it’s a love story. We have a bit of an inauspicious start, but spending time together on the farm and our experiences together, and really my relationship with her son as well, we fall in love eventually for a happily ever after.

Soaps.com: Was it difficult to get time off from “GH” to film the movie?

Paevey: It was a little difficult, yeah. This came together very quickly, so it had us scrambling for a minute there, but we figured it out.

Soaps.com: How did the part in the film come about?

Paevey: I had previously done one movie for Hallmark, a film called Unleashing Mr. Darcy, and it was a little aside from the “Pride and Prejudice” universe, not directly connected. It did really really well, and so I think the Hallmark family likes to keep things in the family. If you worked together and it was a positive experience, and it was a successful experience, then I think you’re in. This we just got an email about in on about a Thursday night, and we put an answer in on Saturday.

Soaps.com: Where was the project filmed, and how long did it take?

Soaps.com: Recently on Instagram you shared a photo of yourself and your co-star Brenden Underland working on some of your Fortunate Wanderer tinkerings, which you seemed to enjoy. How was that experience?

Paevey: That was one of my favorite experiences on any film set ever. I love kids, I go crazy when there are kids around because I am a big child. So I get there and there is this boy on set and he’s going to play Jen Lilley’s son, Andy. Kids usually like me, and we had an instant affinity for one another when we got on set. Come to find out he is obsessed with rocks and gemstones and things like that, which is basically my little side business. I’m actually crafting right now as we speak. I didn’t ask him about it, he just offered up that he had rocks with him and really liked them, and I was just like, talk about the coincidences of all coincidences. I had brought a load of stuff to work with myself, so I showed him a little workshop I had brought with me and he went crazy. For the next two weeks I had kind of my own little apprentice. I told him he could use any of my gear, anything he liked that he saw. If you like that metal then take it. If you like that tool then use it. If you like this stone take it. I gave him a whole bunch of my stones and a little bit of metal to work with on the first day we worked together, and he really enjoyed it and had an affinity for it. So later on that day I went on to the website that sells me all my supplies, and it took a little while to piece everything together, but I ordered a basic workshop set-up similar to what I have, all the tools he would need to make the things he was making while we were together. He lives up there in BC, so it’s not like we can visit all the time. I will definitely see him the next time I am up in British Columbia. His mom has my mailing address and my phone number, but I shipped him a bunch of goodies and told him that I expected updates and want to see what you are making. But that was pretty much it. We worked together the first day and he was pretty much in my trailer making things out of metal for two weeks.

This is Brenden, and he is a genius. Not on social media yet, but I think that’s a good thing…. Instant bff on set, who happens to be really into stones and gems, so I showed him my on set workshop, and boom, instant apprentice too. We worked on a piece together today for his lady friend at school, and it was maybe the best hour ever. All the feels. @hallmarkchannel #beingproductivebetweenscenes #makinfrens #workwithyourhands #createsomething #sharewhatyouknow #lifeofadventure

Soaps.com: Did you get a lot of time to do some exploring while filming?

Paevey: I did not. The way the schedule worked out I ended up having pretty long days and wrap times. I’m a baby, I need my sleep, so we had a two day break in the middle of it that some people actually managed to get out and explore. But I was so exhausted that I just slept and ate and just rested. Then I got into crafting and making some stuff. When I start making things, especially if the thing I’m making is turning out kind of cool, I kind of get into a trance. So the second day I spent crafting. I went out and grabbed a bite with a couple of friends that live up in Vancouver, but I didn’t get a ton of exploring in so I could come back to continue filming after our break with a clear head.

Soaps.com: So in addition to your upcoming Hallmark movie, you have a Lifetime movie Locked-In debuting August 19 at 8:00 PM, where you appear to play a not so nice guy.

Soaps.com: Can you tells us a little about it?

Paevey: We filmed it in Kentucky in January. Same deal, it was a very short production, I think it was twenty production days. It was absolutely freezing and I got pneumonia. I basically spent three and a half weeks outside getting hosed down with fire hoses in 19 degrees Fahrenheit. So the story of that one goes that my character’s name is Draven. While in prison I come upon a story of a guy that pulled off a derby heist for a significant amount of cash with an honest man. So this crime had two people involved, one a career criminal and the other a family man who was the inside guy that worked for the derby and was really only participating because he wanted to provide for his family. They pull off the heist, but said career criminal ends up killing the honest family man. I find out about this in prison and I decide I’m going to go pay the family, who is now missing a father figure and has a ton of money hiding somewhere over there, a visit to see if I can relieve them of said money and do so during a storm. The film was originally called “The Storm,” but I think they changed it because it was so cold that all of the water kept freezing on me. So I show up as this poor unlucky traveler hoping to prey on the sympathies of these people in the middle of the storm that they’ll allow me in, and they do. In the beginning I’m playing off their trust. The gal that plays the daughter Kaleigh Rivera, she’s amazing, and I got the distinct impression that she was brand new [to acting]. Her and the guy that played her boyfriend absolutely awesome. Her character doesn’t trust me from day one and rightfully so. It doesn’t take long before Draven stops being nice and starts being more aggressive in his pursuit of the money.

Paevey: Villains are fun man. You know I play such a vanilla good guy most of the time. The stuff that I get booked for tends to be the good guy, the boyfriend, yada yada. But the villain was a bit different for me and a lot more fun. They wanted a lot of rage out of Draven. It was a bit more fun, but stressful. I had a stress headache the whole time. Once Draven slips I’m literally rage screaming half way through the movie. But it was definitely a change of pace.

Soaps.com: Now in addition to your two television movies, you also have an episode coming up this Thursday where you compete in ABC’s Battle of the Network Stars. How did you get involved in that, and how was the experience?

Paevey: That one came through another email. There was no audition process because it’s a show that involves active players in the ABC universe. Because of I am who I am, on all my social media stuff I am Mr. Adventure Guy, and anyone who knows anything about me knows it is just what I do for fun. So we got an email asking if I wanted to be involved and I was like, abso-fucking-lutely I want to be involved! I would do that in a heartbeat. You just say when and where and I will be there. My experience was great. It was an absolute blast. The athletic competitions were fun, the obstacle course was an awesome experience. I got to meet and compete against people who were childhood heroes of mine like Lou Ferrigno in two events and hang out with these people. It was a great experience and I would do it again in a heartbeat. I hope after my performance, which you will see on Thursday, that I earned the right to comeback and compete again because I left some lasting effects of my time there.

Gotta say, it was awesome to spend the day with one of my lifelong fitness inspirations #louferrigno …catch an epic competition tomorrow at 9/8 central on ABC @networkstarsabc , team TV Cops! @generalhospitalabc A post shared by Ryan Paevey (@ryanpaevey) on Aug 16, 2017 at 2:37pm PDT

Read our previous interview with Ryan Paevey from 2014.