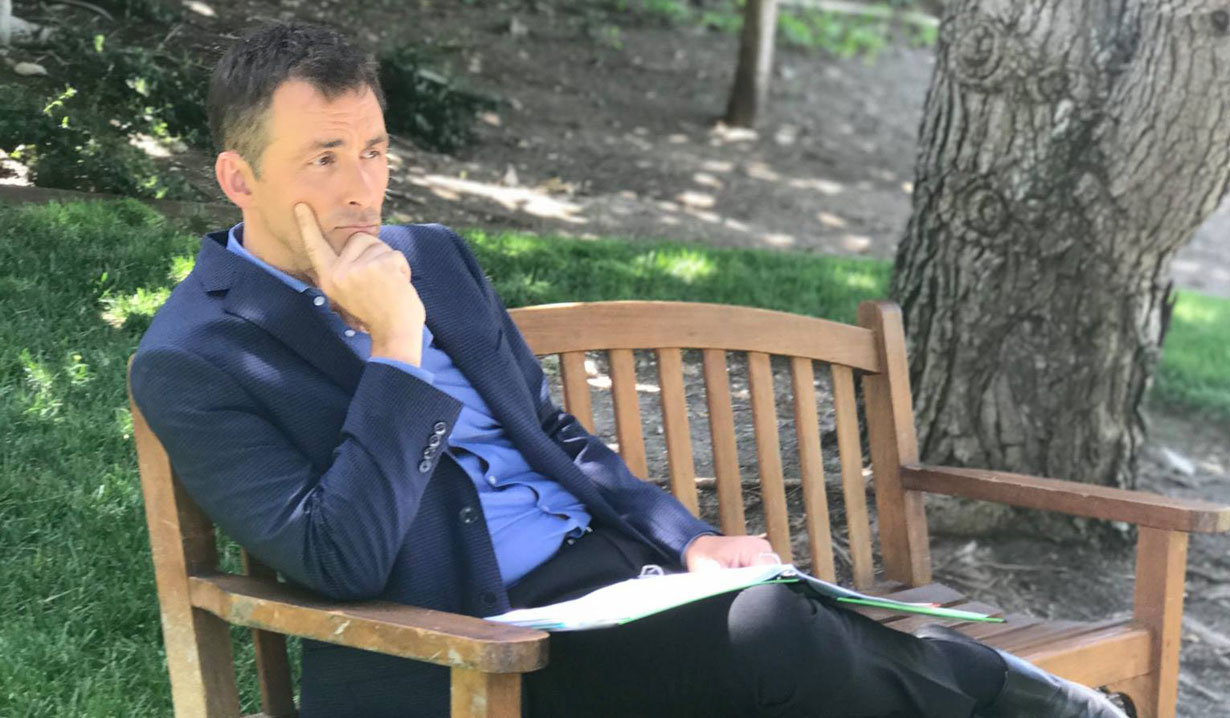 “General Hospital” has been using a new set location for over a year now, the California landscape right outside their Los Angeles studio. Savvy Soaps.com readers have noticed on occasion that the sunny outdoor California environment doesn’t always match upstate New York where Port Charles is set, but enjoying soap operas often requires suspending logic. The outdoor location is usually used in the spring and summer to match the weather in New York at the same time of year. Recently we’ve seen Nelle and Michael run into one another at the park while taking care of Avery and Charlotte. Anna and Valentin met up in the park where both were jogging, though Valentin had no idea that Anna was actually her twin Alex at the time. Liz took her boys to the park for a picnic, where Jason and Franco shook hands. In previous years the outdoor location has been used for serious talks, such as Lulu and Dante working on their marriage after Dante’s affair with Valerie.

More: The Port Charles teens over the years

“General Hospital” recently posted some new behind the scenes photos of their latest outdoor shoot on social media. In the photos James Patrick Stuart (Valentin Cassadine) was taping scenes with Nancy Lee Grahn (Alexis Davis). Valentin was carted off by the WSB, but not before Alex escaped their custody and gave him a way out of his legal issues. The latest pictures would suggest that Valentin returns to Port Charles and may be seeking his half-sister Alexis’ legal services.

Keep watching “GH” for more outdoor location shoots featuring your favorite characters, and view some of them that the show has shared on social media.

Running lines is so much more relaxing when we're shooting outside. ?@NancyLeeGrahn #GH #InTheWild #BehindTheScenes pic.twitter.com/mFQYwRVb8L

Spotted: @japastu lost in thought during a break in our location shoot today! Stay tuned for more fun shots from outside the walls of #GH! pic.twitter.com/NhJKvTdl0j

Ava is NOT HERE for Carly intruding on her afternoon with Avery. A brand-new #GH starts RIGHT NOW on ABC! pic.twitter.com/2QJ0s9PlBt

The heat wave in Port Charles continues, giving Franco and Liz an excuse to enjoy a day in the park. West Coast, #GH starts NOW on ABC! pic.twitter.com/fH5y97ODwc

Now that Jason knows more about Jake's trauma, he and Sam hope to fix things once and for all. Tune into #GH right now on ABC! pic.twitter.com/zXVSyUmKJY

Take in the sun West Coast! Anna and Valentin take their fractured relationship outside for some fresh air. #GH starts NOW on ABC! pic.twitter.com/jcY1clIl3B

A day in the park does everyone some good, especially Nelle & Michael. Tune into #GH right now on ABC! pic.twitter.com/4YwaSqNNgR

Spring has sprung & @valentinifrank took us all outside yesterday for some work in the sun! We had a little fun too. #BehindTheScenes #GH pic.twitter.com/U6Nq0Afdry

We don't get outside often, but when we do it's ALL HANDS ON DECK! Thankfully, the weather was gorgeous today. ? #behindthescenes #gh pic.twitter.com/g5KCkrNTDu

‘Mrs. Maisel’ Season 4: What You Need To Know About When It’s Returning & More