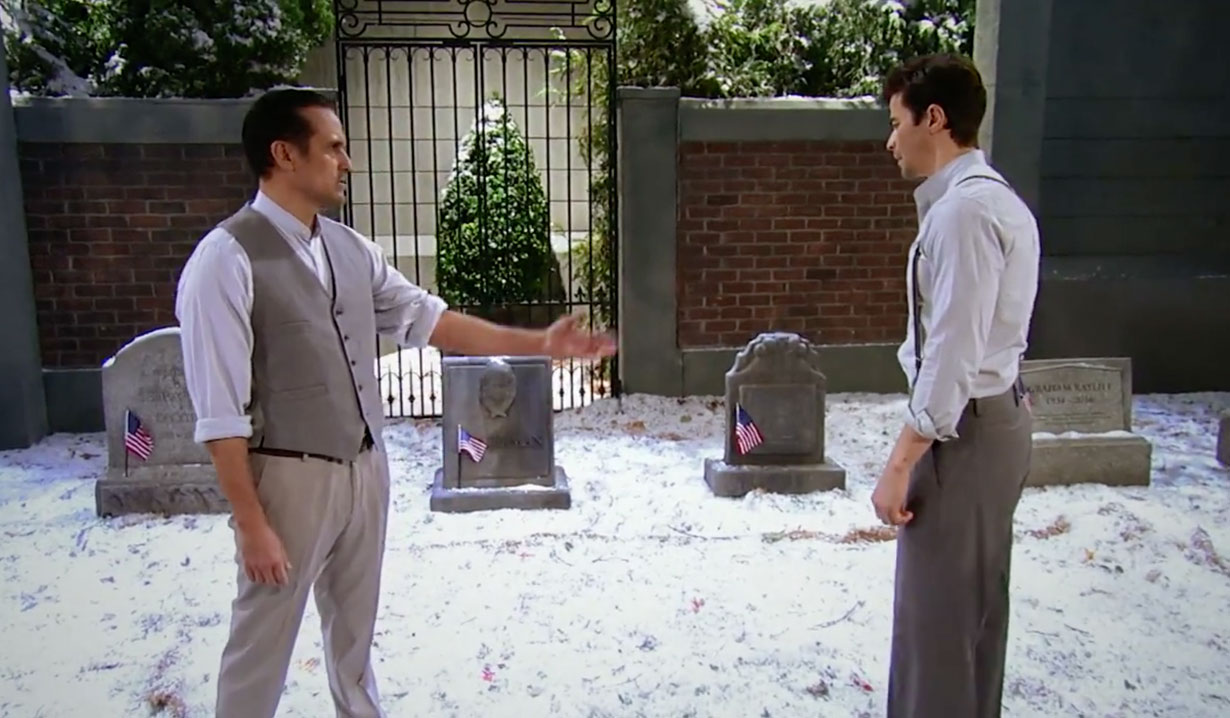 Updated on February 27: Matt Cohen (Griffin Monroe) and Maurice Benard (Sonny Corinthos) worked together to recreate a scene from “Hacksaw Ridge.” The movie, which stars Andrew Garfield (“Spiderman”), tells the true story of WWII Army Medic Desmond T. Doss. Doss served during the Battle of Okinawa, but refused to kill. He became the first man in American history to receive the Medal of Honor without firing a shot. Watch this scene and others here on Soaps.com

Michael Easton (Hamilton Finn) and Rebecca Budig (Hayden Barnes) acted out a scene from “Hell of High Water.” The movie tells the story of a divorced father and his ex-con older brother who resort to a desperate scheme in order to save their family’s ranch in West Texas. It stars Chris Pine (“Star Trek”) and Ben Foster (“X-Men: The Last Stand”).

“Hidden Figures” tells the true story of a team of African-American women mathematicians who served a vital role in NASA during the early years of the US space program. The movie stars Taraji P. Henson (“Empire”) and Octavia Spencer (“The Help”). Maura West (Ava Jerome) and Sonya Eddy (Epiphany Johnson) star in this recreated scene from the film.

On February 23, Anthony Montgomery (Andre Maddox) and Donnell Turner (Curtis Ashford) worked together once again to recreate a scene from the Oscar nominated film “Moonlight.” “Moonlight” follows the life of a young black man from childhood to adulthood as he struggles to find his place in the world while growing up in a rough neighborhood of Miami. The movie stars Trevante Rhodes (“Westworld”) and Ashton Sanders (“Straight Outta Compton”). Watch this and the other recreated scenes right here on Soaps.com.

Chad Duell (Michael Corinthos) and Dominic Zamprogna (Dante Falconeri) recreated a scene from “Manchester by the Sea.” The film tells the story of a loner who is asked to take care of his teenage nephew after the boy’s father dies. It stars Casey Affleck (“Ocean’s Eleven”) and Michelle Williams (“Brokeback Mountain”).

On February 21, in the latest recreation of a scene from an Oscar nominated film, Chloe Lanier (Nelle Hayes) and Parry Shen (Brad Cooper) pay homage to “Lion.” “Lion” stars Sunny Pawar, Dev Patel (“Slumdog Millionaire”) and Nicole Kidman (“Moulin Rouge”). It tells the story of a five-year-old Indian boy named Saroo who gets lost on the streets of Calcutta, thousands of kilometers from home. He survives many challenges before being adopted by a couple in Australia. Twenty-five years later he sets out to find his lost family.

On February 20 Soaps.com reported that ABC and actors from “General Hospital” are paying homage to the Oscar nominated films by reenacting scenes from the movies every day up until the Oscars on February 26. Watch these fun scenes right here on Soaps.com.

First up, Hayley Erin (Port Charles’ Kiki Jerome) and Matt Cohen (Griffin Monroe) reenact a scene from “Arrival.” “Arrival” tells the story of a linguist attempting to decipher the language of an alien species that lands on earth in order to discover what their purpose is. The film stars Amy Adams (“Julie and Julia”) and Jeremy Renner (“The Avengers”).

Anthony Montgomery (Andre Maddox) and Donnell Turner (Curtis Ashford) team up to act out a scene from “Fences.” “Fences” is the story of Troy Maxson, a mid-century Pittsburgh sanitation worker whose dream of being a baseball star could tear his family apart. The film stars Denzel Washington (“Philadelphia”) and Viola Davis (“How to Get Away With Murder”).

Erin is joined by Robert Palmer Watkins (Dillon Quartermain) to recreate a scene from “La La Land.” “La La Land” Is about Mia, an aspiring actress, and Sebastian, a dedicated jazz musician, who struggle to make ends meet while pursuing their dreams of stardom in Los Angles. The film stars Ryan Gosling (“The Notebook”) and Emma Stone (“The Help”).