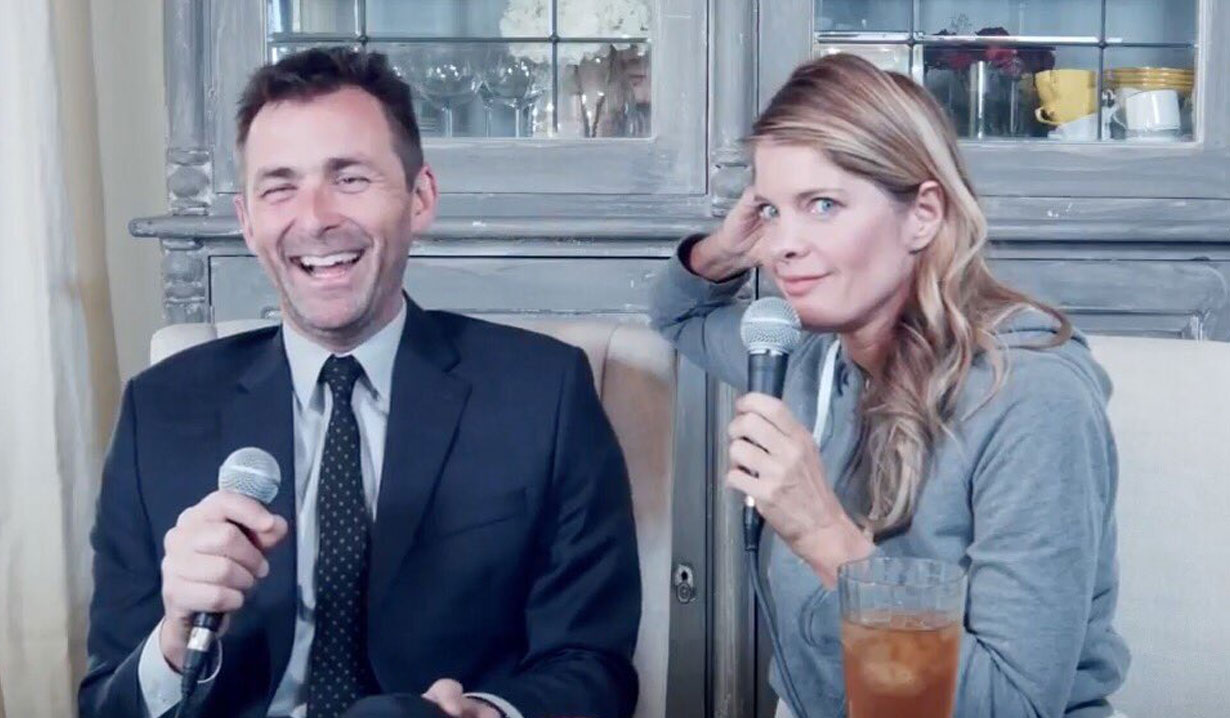 Updated March 21: James Patrick Stuart (Port Charles’ Valentin Cassadine) is the latest “General Hospital” cast member to appear on Michelle Stafford’s podcast. The two discuss working together on the show, Stuart working with Meryl Streep, auditioning in Hollywood, working with problematic actors, and dating. Watch the episode on Soaps.com to find out the meaning behind his name, and how Stuart’s wife deals with his love scenes.

On March 7, Michelle Stafford welcomed Emmy Award winner Lilly Melgar of “The Bay” (Janice Ramos) and “General Hospital” (Port Charles’ Lily Rivera Corinthos) to her latest podcast. The two talk about Melgar’s busy schedule, learning from your kids, being a single mom, and dating. Watch the latest episode to see them deciphering text messages from men, discuss Snapchatting, and to find out how the two met over a payphone.

On February 9, Finola Hughes (Anna Devane) is the latest actor to appear on Michelle Stafford’s podcast. In part one of a special two-part podcast the two discuss bald men, showing emotion, taking showers, and their pasts on Aaron Spelling’s “Pacific Palisades.” Find out what show replaced their failed Spelling drama when the network pulled it, enjoy the little jabs these two good friends take at each other, and watch them play “what annoys you the most” in the latest podcast.

Soaps.com reported on January 24 that Michelle Stafford welcomed “Days of our Lives” actor Greg Vaughan (Eric Brady) to her latest podcast. The two discuss dropping the F-bomb, the struggles of being a single parent, and his return to “Days.” They also discuss his other show Queen Sugar. Vaughan talks about being a Texas boy, what he likes to do in his down time, as well as the difference between daytime fans from network to network. Watch as the two imitate a late night sexy phone call between two people in a pretend relationship.

Michelle Stafford welcomes “General Hospital’s” Vinessa Antoine (Jordan Ashford) to her podcast. The two discuss what it is like being a single working mom and trying to be a great mom at the same time. They also discuss Vinessa Antoine’s cooking blog and website. Watch to find out about some of Antoine’s earlier work, including a popular Canadian show that is available on Netflix. Stafford also reveals her most embarrassing moment during a date.

The amazing Cady McClain (Rosanna Cabot on “As the World Turns,” Dixie Martin on “All My Children,” and Kelly Andrews on “Young and the Restless”) was Michelle Stafford’s latest guest on her podcast. McClain shares a funny story on how she first met her husband Jon Lindstrom (Kevin Collins on “GH”), and how another “GH” star interrupted their initial meeting and “stole” him away. They also discuss cooking food for men, and her documentary project Seeing is Believing: Women Direct. Also find out about her career as a director and a writer, including one of the first plays she wrote that involved a married couple where the woman bought her husband a pair of women’s underwear.

Michelle Stafford welcomed Ian Buchanan, best known for playing Duke Lavery on “General Hospital” to her latest podcast. The two discuss ghosts, the late Garry Shandling, riding in Uber, and love scenes with Finola Hughes (Anna Devane, “GH”). They also discuss society’s obsession with texting, including fellow actors who do it during the middle of a scene. Soaps.com recommends watching the podcast and find out what Stafford admits gets to her in terms of soap writing, storylines and characters.

On Michelle Stafford’s newest “Single Mom A Go Go,” Stafford chats with Linsey Godfrey, Caroline Spencer from “The Bold and the Beautiful.” The duo discusses being a single parent and social media, and Stafford reveals she had a benign brain tumor and how that affected her life so far.

On the latest episode of Michelle Stafford’s “Single Mom A Go Go,” Stafford welcomes her good friend and former “The Young and the Restless” co-star Christian LeBlanc (Michael Baldwin). The two discuss the origins of his last name, Stafford’s daughter picking up some of her habits, they reminisce about improvising on “Y&R,” and they remember the time they had a brush with Sydney Pollock. The two also play a game about what annoys them the most, during which they had to rate scenarios on a scale from 1 to 10. Find out what LeBlanc rated a 10 because it makes him, “black-out mad,” and what annoys Stafford the most when it comes to flying. Watch the video right here on Soaps.com.

YES!!! It was THIS MUCH FUN having @CJLeBlanc on #singlemomagogo #GH #YR OUT TODAY!! pic.twitter.com/dmaCzduyCR

November 1: “The Young and the Restless'” Kristoff St. John (Neil Winters) joins his former castmate and good friend Michelle Stafford for her latest podcast. The two discuss floors, cults and St. John’s father’s documentaries. St. John tells the story about how his step-mother claimed, “a man walked through her wall while she was in a bathtub… and said that he looked like an African American man with a big afro and an orange robe.” Find out where this story leads, and watch as St. John opens up about the death of his son Julian St. John. October 17: Michelle Stafford is back with a new video and this time she’s with her friend, Galen Gering (“Days of our Lives'” Rafe), talking about growing up, being teased as kids, hilarious stories about cat poop under Gering’s pool table and a rat in Stafford’s house…

A very “behind the scenes” shot during the filming of @singlemomagogo The show is getting legs!!!! Thank you so much for the support guys! Go check out our website singlemomagogo.com and remember to subscribe to our YouTube page!! Go check out all of the Podcasts! The podcast’s with these men are funny and heartfelt! @ggering comes out October 17 and @kristoffstjohn show comes out October 31 thank you @tovenstith and @robfilios and @seviercrespo for your insight   A photo posted by Single Mom A Go Go (@singlemomagogo) on Oct 12, 2016 at 9:53am PDT

This is up!!! Go check it out at singlemomagogo.com #GH #DAYS @ggering

October 4: Michelle Stafford’s long-time friend, and ex-co-worker, talented and beautiful Tracey E Bregman (Lauren Fenmore, “Y&R”) visited Single Mom A Go Go in Episode 8 to discuss dating, sex, IVF, how women tend to overthink, and more. It’s like an even better episode of “Sex in the City.” September 20: Michelle Stafford’s “General Hospital” co-star William deVry (Port Charles’ Julian Jerome) joins her in this week’s Singe Mom-A-Go-Go podcast. The two discuss deVry’s childhood growing up in Montreal, his love of hockey, Botox and aging gracefully, and of course Julexis. DeVry and Stafford both discuss the fans’ reactions to storylines and how they know when even the actors aren’t feeling a storyline themselves. September 7: Photographer, producer and writer Paige Dorian joins Michelle Stafford in episode 6 of her podcast. Dorian was one of Stafford’s partners for “The Stafford Project.” In this episode the two discuss a famous movie star who used to work out at Stafford’s gym, dating apps, and what men expect of women these days. Also find out the latest about season two of “The Stafford Project” and how difficult it is to make and sell a show. However they assure fans that they have “good stuff happening.” Updated August 23: Michelle Stafford’s back in episode 5 with “Days of our Lives” actress, Kassie DePaiva, who talks about a return to “Days of our Lives.” Stafford admits she’s gained a little weight and calls DePaiva’s husband, ‘sexy’. Find out what they said about the talented Kim Zimmer (Reva, “Guiding Light”) and learn a little about her son, James Quentin (JQ), who was born hard of hearing. DePaiva talks about returning to “Days of our Lives.” Single Mom A Go Go returns with episode 4 and singer, actress, Stacy Francis as the guest. Stafford reveals that she was once “large” and recounts a funny story about eating all of her roommate’s ice cream, something she thinks all women can relate to! Updated July 26: On episode three of Stafford’s “Single Mom a Go-Go” the actress welcomes Emme Rylan from “General Hospital.” The two discuss the reception Rylan got when joining the show as the recast Lulu Falconeri, their kids getting older, nude scenes on soaps, and a bit of sex talk. Watch the episode right here on Soaps.com. Updated July 12: Episode two of Stafford’s “Single Mom a Go-Go” is available for viewing and this week features former “Y&R” co-star Lauralee Bell (Christine Williams). Watch as the actresses talk about motherhood experiences and their own parents, including Bell’s father Bill Bell, who most may not know, absolutely adored Michelle Stafford. Watch for the moment mid-way through when Michelle reveals something surprising, which makes her cry and feel embarrassed! Updated June 28: Michelle Stafford’s first episode of “Single Mom a Go-Go” is now available to watch. The premiere episode features special guest Nadia Bjorlin (Chloe, “Days of our Lives”). Warning, the show contains explicit language and topics! Original Story June 27: “General Hospital’s” Michelle Stafford (Port Charles’ Nina Reeves) has launched yet another side project, this one a podcast titled “Single Mom a Go-Go.” The podcast launches tonight in a link to be shared on Stafford’s twitter account. It looks at what it is like to be a single mom, and a single woman, in L.A. It will feature guests and explicit language and subject matter.